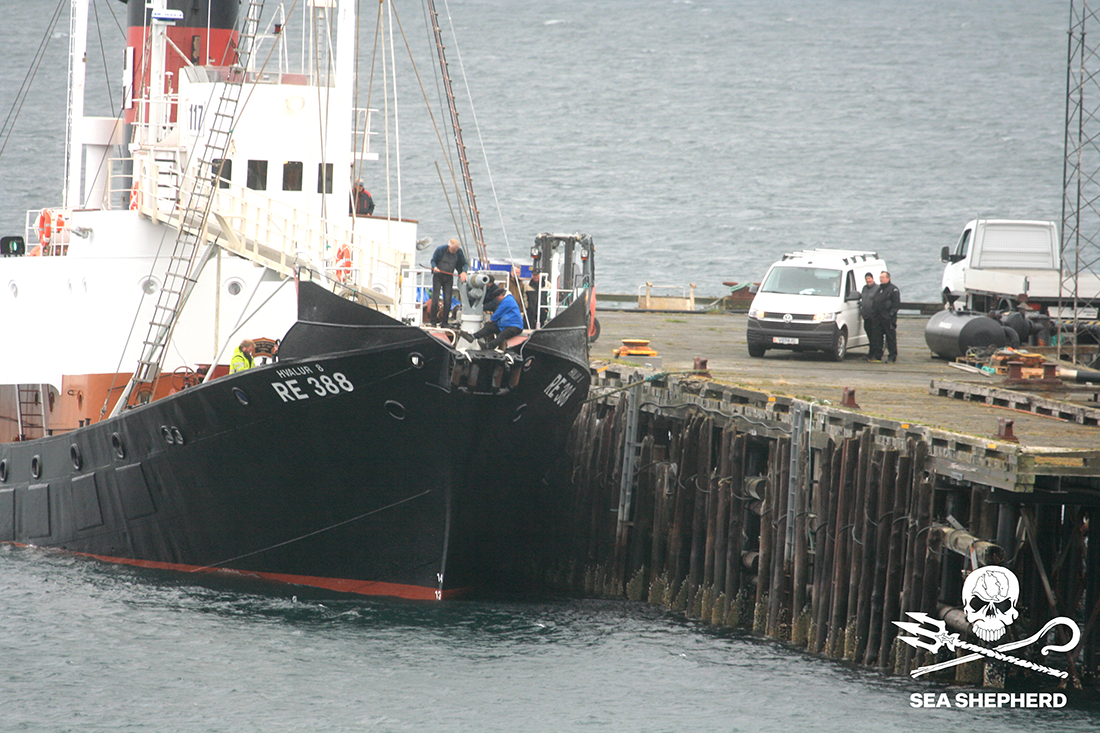 In March, Kristján Loftsson, CEO of the Icelandic whaling company 'Hvalur hf' stated in the Icelandic media that his two ships will once again be hunting threatened Fin whales (the second largest whale species after the blue whale) this summer in the waters around Iceland.

Loftsson previously admitted that his company has been involved in a long tug of war with the Food Administration (MAST) due to issues around hygiene at the whaling station in Hvalfjörður reported previously by Sea Shepherd in 2018. However, as a result of recent improvements to the facilities and buildings at its whaling station - Hvalur hf once again has a licence to process whale products.

Based on previous whaling season statistics and conversations with Hvalur hf whaling crew, we expect Loftsson's intention is to kill between 140 to 180 fin whales with whaling operations starting later this week

“Minke whaling ended in Icelandic waters over two years ago and it is time Loftsson shut down Hvalur hf’s fin whaling operations. The killing of these majestic fin whales, which only continues today due to one man, is a disgrace brought upon Iceland which is a respected, peaceful, eco-friendly, forward thinking nation where a significant majority no longer support whaling” - Rob Read, COO at Sea Shepherd UK

This year, Sea Shepherd UK and Sea Shepherd Iceland are partnering on Operation Northern Exposure - a more ambitious campaign to expose the cruelty of the commercial hunting of fin whales around Iceland.

Building upon our experience from the previous campaign in 2018, our crew which arrived in Iceland last week will be working alongside our Icelandic chapter to make sure Loftsson and Hvalur hf cannot kill Fin whales without the world seeing every pregnant whale killed while carrying their unborn calves, every illegally hunted Blue or Blue/Fin hybrid whale, every harpoon embedded in every whale brought back to the whaling station via our online articles, social media posts, news releases and live streams.

If continued pressure is applied from both within Iceland and from the international community - Fin whaling by Loftsson is hoped to finally end when the current 4-year licence block expires at the end of 2023 (as reported at https://bit.ly/3qt9szc)

Loftsson's whaling company is on its way out. However, Loftsson intends to continue whaling to the bitter end with his two remaining whaling ships: Hvalur 8 and Hvalur 9. These antique whaling ships use explosive harpoons that often do not instantly kill the whales as reported by Sea Shepherd’s ground crew in 2018 when dozens of whales had 2, and sometimes 3 harpoons embedded in them.

The whaling ship Hvalur 8 left Reykjavik harbour for brief sea trials on 13th June before entering Hvalfjordur later in the afternoon to make its way to the pier at the Midsandur whaling station where preparations began with the fitting of the harpoon gun. Once fuelled and following the test firing of a harpoon, it is likely that this ship will leave to hunt its first fin whale in over 3 years. The second whaling ship, Hvalur 9 (which is in a worse condition than Hvalur 8) is still having repairs completed, but will no doubt leave Reykjavik soon for the whaling station.

"It is with extreme disappointment and disbelief that we watch the blood sport of a shameless and morally bankrupt man come before the health of Icelandic ecosystems, the right of endangered species and sentient individuals to their lives, and even the economy of the nation that depends heavily on keeping these whales alive. Previously kept out of business due to his legal transgressions, Kristján Loftsson has not only repeatedly shown that he considers himself above the law by violating the legal regulations of our country, but he continues to stain the reputation of Iceland internationally by insisting on carrying out senseless killings for which there is zero commercial demand and which pose an existential threat to our oceans, to marine biodiversity and to our climate. What he chooses to do with our beautiful fjords is turn them into a blood bath. But he forgets that we are still here" - Sea Shepherd Iceland

Preparations in Reykjavik harbour by the whaling ships crew, and the departure of ‘Hvalur 8’ for the whaling station in Hvalfjordur where its harpoon gun was mounted ready to once again hunt threatened fin whales around Iceland.

Help support our campaign and crew by donating to Sea Shepherd at: https://www.seashepherd.org.uk/support-us/donate-monthly.html