Second Campaign to Stop Illegal Fishing in the Southern Ocean

Led by returning Captain, Sid Chakravarty, Sea Shepherd will once again focus its attention on defending the pristine waters of Antarctica, with the aim to eliminate illegal fishing of vulnerable toothfish from the region.

The flagship of the Sea Shepherd fleet, the Steve Irwin, will depart from Melbourne, Australia in December to patrol the “shadowlands” of the Southern Ocean; an area outside of national jurisdiction with limited legitimate vessel traffic where the risk of detection of fishing crimes by law enforcement authorities is minimal.

The Sea Shepherd crews will employ innovative direct-action techniques to fill a law enforcement void that continues to be exploited by the remaining illegal toothfish vessels.

“The illegal operators of the Southern Ocean exist with a resilience that can be tackled only by the determination of Sea Shepherd. The oceans are in peril and our actions remain the only proactive and definite policing presence to tackle illegality. We intend to embrace the responsibility with courage and fortitude and once again locate, investigate and shut down the most notorious poachers on this planet,” said Captain Chakravarty. 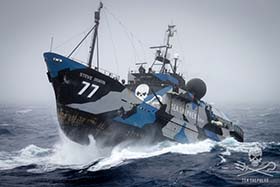 Sea Shepherd’s flagship, the Steve Irwin will depart from Melbourne, Australia in December to patrol the “shadowlands” of the Southern Ocean. Photo: Simon Ager 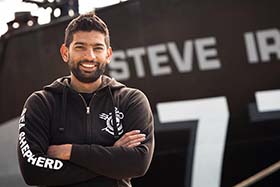 Top predators in the waters of the Southern Ocean, toothfish are a unique, long-lived species that are particularly vulnerable to over-exploitation due to their slowness to reach sexual maturity and high market value.

More commonly known by their market name “Chilean Sea Bass,” toothfish live in Antarctic waters in depths of 300 to 2,500 meters; the coldest waters on Earth. Though only limited scientific information exists on the fish, illegal fishing is shown to have had a devastating impact on populations, leading to collapse and closure of some fishing areas.

Operation Icefish, which lasted for over five months and spawned international cooperative efforts that caused massive disruptions to the illegal toothfish trade, has been one of Sea Shepherd’s most successful conservation campaigns to date.

At the conclusion of the epic five-month long campaign, five of the six known illegal toothfish poaching vessels had been detained. The sixth and most notorious, Thunder, was scuttled in waters surrounding São Tomé and Príncipe following a record-breaking 110-day pursuit by the Sea Shepherd ship, Bob Barker. Sea Shepherd believes that the ship was scuttled in an attempt to destroy evidence of the Thunder’s illegal fishing operations.

Cooperation between local and international authorities, including Sea Shepherd and international policing agency Interpol, resulted in unprecedented fines and jail sentences for some of the worst offending companies and individuals behind the poaching operations.

Sea Shepherd has continued to monitor the movements of the remaining illegal vessels throughout the year and understands that two of the Interpol-wanted poachers, Viking and Kunlun (Taishan), have since absconded from justice. It will be these two vessels that are the focus of the new campaign.

Toothfish poaching vessel, Viking, was detained in Malaysia in March, but has since absconded from justice. (courtesy CCAMLR)

“Thanks to the achievements of Operation Icefish, Sea Shepherd has forged the way forward in the fight against illegal fishing in the Southern Ocean, and beyond,” said Captain Peter Hammarstedt, Chair of the Board of Sea Shepherd Australia. “Captain Chakravarty and the crew of the Steve Irwin return to confront the remaining toothfish poachers with an extensive arsenal of experience and knowledge, confident of success in ridding the Southern Ocean of the toothfish poachers for good.”