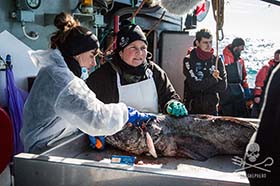 Colette, and fellow Science Officer, Bia, perform a dissection on a toothfish, killed in the illegal gillnets. Photo: Jeff WirthThe first gillnet brought onboard the Sam Simon contained a variety of deep sea plants, animals and rocks which were photographed and examined by the science team. The following organisms were seen in the first gillnet: toothfish, grenadiers, skates, jellyfish, sea stars, sea urchins, star fish, eggs, rocks, seaweed and crabs.

Ten of the numerous toothfish that were in the first gillnet were set aside for dissection and gastrointestinal flushing by scientific officers Colette Harmsen and Bia Figueiredo. The fish were weighed using a sling and hanging scale and then transferred to the custom-built science table where their length was recorded and they were dissected to remove the entire gastroinestinal tract. Each tract was then flushed through a series of sieves to collect solid items and to examine these for plastic and other items. The items were placed in specimin collection jars with 70% ethanol and set aside for examination under the dissection microscope.

The following items were collected from the sieved gut contents, and photographed and examined under the microscope: fish otoliths, eyeballs (possibly but not certainly fish eyeballs), internal nematodes (parasitic gut worms), small crustaceans, unidentified cartilagenous disks, eggs of unknown origin, whole fish and parts of fish (possibly bait fish from the gillnet), coarse sand, squid beaks and a small white item that looks like a piece of plastic. The data collected will be shared with collaborators on return Australia.

All information gathered is important because of the overall lack of data about ecosystems in these remote areas. We retrieved hard corals from the gillnet and their presence indicates seamounts on the ocean floor. Seamounts are ancient underwater volcanoes and are unique deep-sea features that create habitats thought to have high levels of endemic fauna, productive fisheries and benthic communities vulnerable to man-made impacts. Many seamounts are isolated features, occurring in the high seas, where access is limited and thus biological data scarce.