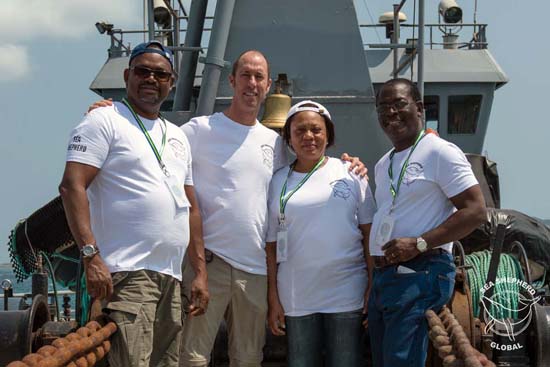 Georges Mba Asseko; Captain Andre Rutishauser; Micheline Schummer, Ministry of Fisheries and Aquaculture and Guy Nang Bekale onboard the Bob Barker from Gabon to São Tomé.The Sea Shepherd ship M/Y Bob Barker has arrived in the Republic of São Tomé and Príncipe in a move to expand patrolling efforts against Illegal, Unreported and Unregulated (IUU) fishing to include the waters of the West African island state.

Under the name Operation Albacore, Sea Shepherd has been assisting the Government of Gabon to tackle IUU fishing since April 2016 by providing the use of the M/Y Bob Barker as a civilian offshore patrol vessel operating in Gabonese waters under the direction of the Gabonese Government.

To date Operation Albacore has led to the arrest of three illegal fishing vessels; the confiscation of several unlawful fishing aggregation devices; the release of endangered species entangled in fishing gear including Bryde’s whales and whale sharks; and the inspection and documentation of over 40 licensed fishing vessels to ensure legal compliance.

Earlier this year, Gabon and São Tomé and Príncipe signed an agreement to further cooperation between maritime law enforcement of both countries.

Two marines and one fisheries observer from São Tomé will join Sea Shepherd crew, Gabonese marines and Gabonese fisheries enforcement officers on board the M/Y Bob Barker, to patrol São Tomé and Príncipe's sovereign waters for the next three weeks in order to detect and deter IUU fishing.

Sea Shepherd has a history of working with São Toméan authorities to combat IUU fishing. In April 2015, Sea Shepherd chased a toothfish poaching vessel wanted by the International Criminal Police Organization (Interpol) for 110 days until it was deliberately sunk by its captain in the waters of São Tomé. São Tomé authorities successfully prosecuted the case and thanks in part to evidence provided by Sea Shepherd, the captain and two of his officers were sentenced to terms of imprisonment up to 3 years and fines totalling 15 million Euros.

“In October 2015, Sea Shepherd crew assisted the São Tomé Prosecutors Office by providing evidence that led to the successful conviction of poachers belonging to the most notorious illegal fishing vessel in the world, the F/V Thunder. We have now returned to São Tomé and Príncipe with a vessel to further support the country in its critical efforts to conserve and protect their waters. We are incredibly proud of the cooperation between Gabonese authorities and Sea Shepherd; and we are excited that the scope of that cooperation has grown to include other states passionate about addressing the problem of IUU fishing in the Gulf of Guinea”, said Captain Peter Hammarstedt, Sea Shepherd’s Director of Operation Albacore. 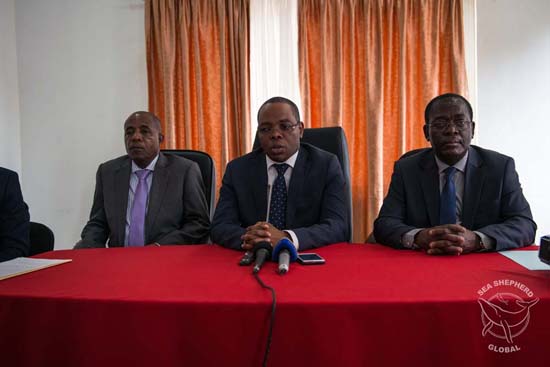 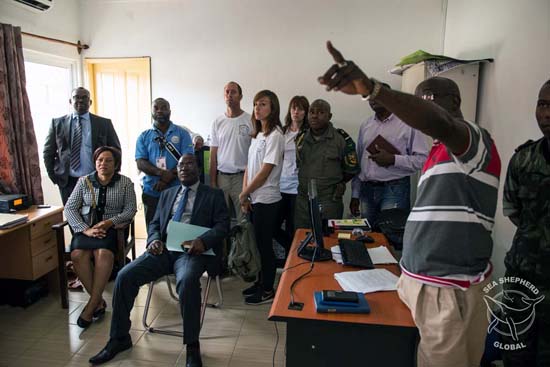 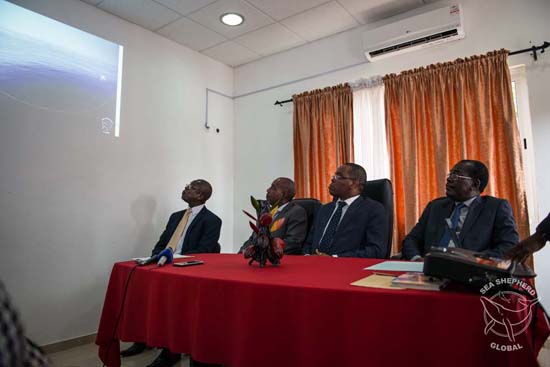 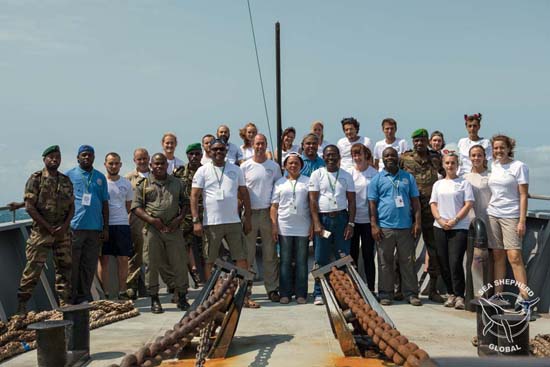 Gabonese Director Generals, marines and fisheries observers with Sea Shepherd Global crew during the transit from Gabon to São Tomé.