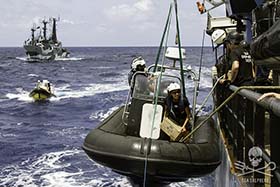 Crew of the Sam Simon resupply the Bob Barker for the ship's on-going pursuit of the Thunder.
Photo: Simon AgerYesterday, the Sea Shepherd ship Sam Simon rendezvoused with fellow Sea Shepherd ship, Bob Barker, at   7˚ 27' South 02˚ 19 West, in the Atlantic Ocean. It is the second time the vessels have met during the course of Operation Icefish, Sea Shepherd's current Southern Ocean Defence Campaign, which commenced in December 2014.

The Sam Simon will be resupplying and lending support to the Bob Barker as the ship continues its world record breaking pursuit of the internationally blacklisted, Nigerian-flagged poaching vessel, Thunder.

Captain of the Bob Barker, Peter Hammarstedt, said, “The return of the Sam Simon is one more nail in the coffin of the Thunder. With it comes the reminder that we have at our disposal a ready support network that can, and will, outmatch anything the Thunder has available to them. We have the resources and we have the determination to see this chase through to the very end.”

The Thunder was first intercepted by the Bob Barker on December 17 on the Banzare Bank, Antarctica. Since that time, the Bob Barker has maintained a continuous pursuit of the poaching vessel, travelling from the Southern, to the Indian and now the Atlantic Ocean, over a staggering 98 days.

The Sam Simon departed from Port Louis, Mauritius, on March 9 where it had been for 10 days. The Sea Shepherd ship had travelled to the island state in order to hand-over evidence of the Thunder's illegal fishing activity to an international investigative team, coordinated by local authorities under the direction of a Criminal Intelligence Officer from international policing organisation, Interpol.

The Sam Simon also used the time in port to gather fresh supplies for the Bob Barker. 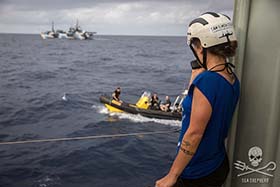 Crew of the Sea Shepherd ships coordinate the resupply operation through constant radio contact.
Photo: Jeff WirthCaptain of the Sam Simon, Sid Chakravarty, said, “We have travelled over 15,000 nautical miles through the course of Operation Icefish, starting in the South Pacific and meeting today with the Bob Barker in the South Atlantic. The rounding of the Cape of Good Hope in pursuit of the Thunder, first by the Bob Barker and then by the Sam Simon, is nothing short of legendary. The crew of the Bob Barker have been at sea for 111 days today and we are delighted to be by their side and it fills our hearts with joy and respect for these brave ocean warriors.”

The Thunder is the most notorious of the six remaining toothfish poaching vessels – which Sea Shepehrd calls the “Bandit 6” - that are known to engage in Illegal, Unreported and Unregulated (IUU) fishing for toothfish in the Southern Ocean.

The vessel has a long history of fishing violation and in December 2013 was issued with an Interpol purple notice for suspected illegal fishing activity, following a joint effort by New Zealand, Australian and Norwegian authorities.

The Thunder was the first of three “Bandit 6” poaching vessels that have been intercepted by Sea Shepherd during Operation Icefish. On February 2 this year, the Sam Simon intercepted the Kunlun and the Yongding in Australian waters west of the Ross Sea. The Sea Shepherd ship then engaged in a pursuit of the Kunlun, chasing the poaching vessel out of its hunting grounds in the Southern Ocean.

The Kunlun is currently in detention in Thailand, following a coordinated effort between Interpol and Thai, Australian and New Zealand authorities.

Operation Icefish is Sea Shepherd's 11th Southern Ocean Defence Campaign and its first to target IUU fishing operators in the waters of Antarctica.