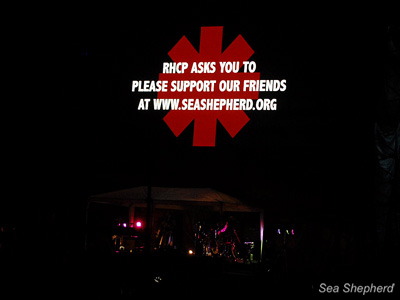 In front of a sold-out crowd of approximately 50,000 punters in Sydney, and a near capacity crowd of almost 40,000 on the Gold Coast, the Red Hot Chili Peppers showed their steadfast support for Sea Shepherd - literally.

Utilising massive, on-stage digital screens, the Chilis displayed Sea Shepherd imagery in a pre-performance visual show on the Big Day Out main stage. The visuals included Sea Shepherd logos and campaign images, as well as a call out from the band that read: RHCP ASKS YOU TO PLEASE SUPPORT OUR FRIENDS AT SEASHEPHERD.ORG.

In Sydney, the Sea Shepherd visual displays were greeted with cheers from the crowds who, after sweltering in the heat of Sydney’s hottest day on record, still had the energy to vocalise their support for Sea Shepherd. There was a similarly welcome reception on the Gold Coast where the Sea Shepherd merchandise and information booth enjoyed a constant flow of enthusiastic punters, keen to find out more about the organisation.

From the moment they hit the stage, it was clear to see why the Red Hot Chili Peppers are so loved and admired by fans and critics alike. For the last three decades they have rocked audiences around the world, and this tour is no exception. Tight. Loud. Inspiring. Epic. This was spine-tingling stuff - the kind of performance that memories are made of.

To everyone who made this happen, particularly the band’s production team, management team and of course to the Red Hot Chili Peppers themselves, we would like to extend a colossal, THANK YOU!

The Chilis continue their headline Big Day Out performances this week, with shows in Adelaide on Friday, Melbourne on Saturday and Perth on Sunday. Sea Shepherd onshore crew will also be staffing merchandise and information stands at each event, so make sure you pop in to say hello and show your support!

For more details, check out the BDO website, here: http://bigdayout.com/ 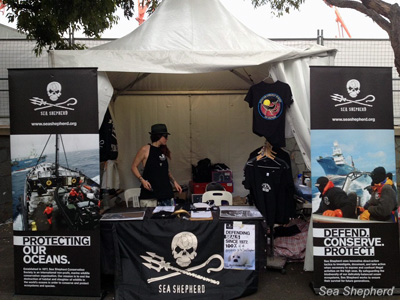 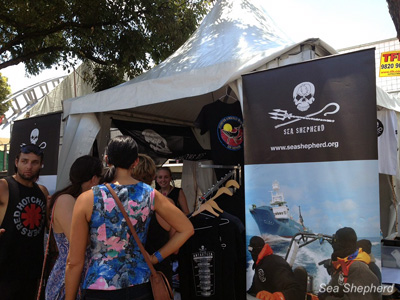 Sea Shepherd was invited by the Red Hot Chili Peppers
to host a booth at Australia's Big Day Out Festival
Photo: Sea Shepherd