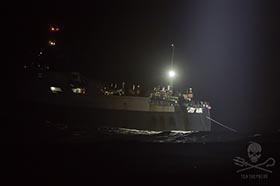 Crew of the Thunder trails nets from the stern of the poaching vessel. Photo: Simon AgerToday, at approximately 0530 AEDT, the Interpol-wanted poaching vessel, Thunder, illegally deployed fishing gear at 38˚ 28' south, 046˚ 47' east, on the Melville Bank in the southwest of the Indian Ocean.

The crew of the Sea Shepherd ship, Bob Barker, has confirmed that a set of buoys, attached to a beacon, were set out by the crew of the Thunder under the cover of night, indicating that the vessel is resuming illegal fishing activity.

The Nigerian-flagged Thunder has been on the run for 50 days after being intercepted by the Bob Barker on December 17, inside the Commission for the Conservation of Antarctic Marine Living Resources (CCAMLR) area of the Southern Ocean, engaged in illegal fishing activity.

Captain of the Bob Barker, Peter Hammarstedt, believes that the vessel is still operating without a license to fish.

He said, “The Thunder is the most notorious of the illegal fishing vessels operating in the Southern Ocean, and has been blacklisted by CCAMLR for the past decade for its illegal fishing operations. While the Thunder flies the Nigerian flag, I can not imagine that Nigeria would have granted them a fishing permit. It is my strong belief that not only is the Thunder banned from fishing in CCAMLR waters, but it does not have a license to fish anywhere.”

Captain Hammarstedt radioed the Thunder, ordering them to cease their illegal fishing activity. The Thunder did not respond to the call.

The crew of the Bob Barker is now preparing to directly intervene to prevent the Thunder's poaching operations. “My action teams are on standby, and my crew is on high alert. At sunrise, we will begin our operations to shut down this latest attempt by the Thunder to plunder the world's oceans,” said Captain Hammarstedt.

On January 16, fellow Sea Shepherd ship, the Sam Simon completed a mammoth operation to retrieve illegal gillnets from the Southern Ocean, after they were abandoned by the fleeing Thunder. More than 70 kilometres of illegal gillnet was retrieved over a three week period and over 1,400 fish, weighing a total of 50,000 kilograms, were returned to the ocean.

On Monday, the Sam Simon intercepted another two Interpol-wanted poaching vessels, the Kunlun and the Yongding, inside Australian waters, in the Southern Ocean. The vessels are two of three poaching boats that were caught by the New Zealand Navy last month, engaged in illegal fishing activity.

The Sam Simon is now in pursuit of the Kunlun.