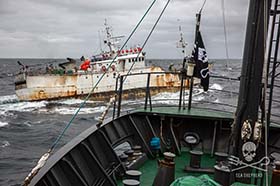 The Kunlun crosses dangerously in front of the bow of the Sam Simon after being intercepted by the Sea Shepherd ship in Australian waters on February 2.
Photo: Jeff WirthThe Interpol wanted, internationally blacklisted poaching vessel, Kunlun, has been detained in Phuket, Thailand on fisheries-related violations.

The action comes just over two months after the vessel was caught by the New Zealand Navy engaged in illegal fishing in Australian waters, and just over a month after it was intercepted by the Sea Shepherd ship, Sam Simon, in possession of banned fishing equipment, again in Australian waters.

The Kunlun, which is one of six vessels that are known to still engage in Illegal, Unreported, Unregulated (IUU) fishing for toothfish in the Southern Ocean, was detained in a coordinated effort between international policing organistation, Interpol, and law enforcement authorities in Thailand, Australia and New Zealand.

The Kunlun has a long history of suspected fishing violations and is believed to have links to known Spanish crime sydnicate, Vidal Armadores.

Since 2008, the poaching vessel has changed names at least ten times in order to avoid prosecution. In January, the Kunlun was issued with and Interpol Purple Notice for illegally fishing for toothfish inside an area regulated by the Convention for the Conservation of Antarctic Marine Living Resources.

Captain Sid Chakravarty of the Sea Shepherd ship, Sam Simon, said, “The Australian government has both a legal and moral responsibility to defend its waters from poachers who wish to exploit it. Yesterday, in cooperation with Interpol, and the Thai and New Zealand authorities, they showed that they take those responsibilities seriously.”

The Kunlun is one of three IUU fishing vessels that have been intercepted by Sea Shepherd since the commencement of Operation Icefish in December, 2014.

On December 17 2014, the Sea Shepherd ship, Bob Barker, intercepted the most notorious of the outlaw vessels, the Nigerian-flagged Thunder, on the Banzare Bank in Antarctica. Despite attempts by the poaching vessel to flee, the Bob Barker has maintained a continuous pursuit of the Thunder, which today enters day 90, off the coast of Namibia.

Captain Peter Hammarstedt of the Sea Shepherd ship, Bob Barker, said, “Over three months, the Sea Shepherd ships have intercepted three of the six remaining toothfish poaching operators. We have shut down the most notorious of those poachers, the Thunder, and we have chased another, the Kunlun, out of its hunting grounds, into the hands of law enforcement authorities. Operation Icefish has shone a spotlight on these criminal operators, ensuring that they can no longer hide-out in the shadowlands of the Southern Ocean and demanding that governments take action against their illegal activity.”

Operation Icefish is Sea Shepherd's 11th Southern Ocean Defence Campaign and the first to target IUU fishing operators in the waters of Antarctica.