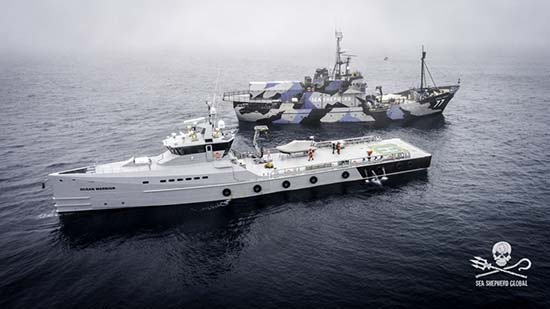 Ocean Warrior and MY Steve Irwin meet up for a supplies exchange and strategy session in the Southern Ocean. Photo by Simon Ager/Sea Shepherd Global

We are now just over a month into our 11th Antarctic Whale Defense Campaign, Operation Nemesis, with the MY Steve Irwin and the Ocean Warrior currently patrolling the Southern Ocean Sanctuary to stop illegal whaling.

After just three weeks, on December 22nd the Ocean Warrior discovered one of the Japanese whaling fleet’s harpoon ships hiding behind an iceberg. Caught with its harpoon uncovered, the Yushin Maru was clearly in the middle of hunting for their self-allocated 333 minke whales. Interrupted from its hunt, the harpoon vessel tried trailing the Ocean Warrior instead, but was quickly outrun by Sea Shepherd’s fast new ship, a first in any Southern Ocean campaigns.

“Finding the harpoon ships is a mixed blessing,” wrote Ocean Warrior’s Captain Adam Meyerson in his commentary Hope Dies Last. “It lets you know the fleet is near, which is a huge relief, but now the real prize, the marine slaughterhouse that is the Nisshin Maru, knows where you are and it will never be found.  The harpoon ship will relay your position to the rest of the fleet and they will simply move to another area.”

A week later on December 31st the security ship, the Kaiyo Maru #7, was spotted by the Steve Irwin’s helicopter and they promptly did a 180° turn to change direction. This ship doubling as a krill research vessel is owned by the same company as Japan’s illegal whaling fleet, the Institute of Cetacean Research. On New Year’s Day, despite the low-visibility weather conditions, the Steve Irwin’s helicopter successfully located the Yushin Maru #3, another harpoon ship in the Japanese fleet.

Operation Nemesis is off to a good start. Despite harsh conditions and days of heavy fog in the Southern Ocean, Sea Shepherd’s vessels have managed to quickly locate half of the Japanese fleet despite having twice as much area to cover than in prior campaigns.

While the search for the Nisshin Maru continues, morale remains high in the stunning Antarctic surroundings where whales, penguins and seabirds have been captured on film by the campaign’s media team, reminding the captains and crew what Sea Shepherd is there to defend, conserve and protect. 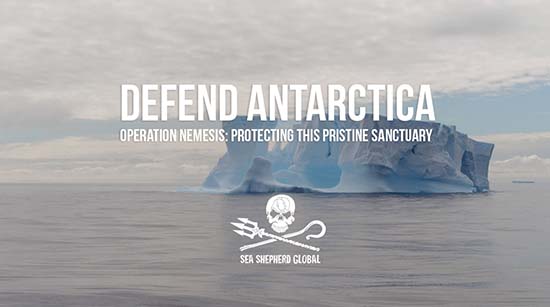 “In previous years Sea Shepherd has always been able to find the Japanese whaling fleet and stop them from getting their full quota,” said Steve Irwin Captain Wyanda Lublink. “We have done this with one ship and at times up to four ships Even though we only have two ships this year, I am convinced that we will succeed again. We have the one thing that the Japanese whale poachers do not, and that is the passion for our life-supporting oceans and for these sentient, beautiful whales. It is this passion for life that will always triumph over greed and destruction.”

Follow Operation Nemesis on Facebook, Twitter and Instagram for daily updates, wildlife photos, crew portraits and weekly captain’s commentaries, such as the latest by Captain Lublink explaining the daily activities on the Steve Irwin, How does a Sea Shepherd Ship Work?