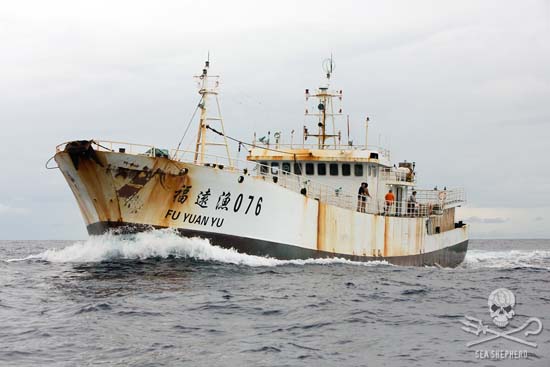 File - The Fu Yuan Yu 076. Photo: Tim WattersOperation Driftnet, a campaign launched by Sea Shepherd Global in February, 2016, has successfully ended the operations of a fleet of 6 illegal fishing vessels.

In an email to Sea Shepherd Global Director Captain Alex Cornelissen, the Chinese Ministry of Agriculture has communicated the results of their investigation. The Chinese government has temporarily suspended the fishing licenses of all of the vessels owned by the company, the Dong Xing Long Ocean Fishing Company. The six vessels of the Fu Yuan Yu fleet have been ordered to remain in port for an indefinite period. In addition, the captains of the fishing vessels have had their certification as Masters permanently revoked and each vessel has been fined the equivalent of $300,000 U.S. dollars.

Captain Paul Watson, founder of Sea Shepherd said, “This was a bold campaign led by a courageous Sea Shepherd captain and his crew.  This intervention has removed six very destructive poaching ships from the Indian Ocean and has sent a strong message to Chinese flagged ships around the Globe that China is serious about international fisheries law and enforcement.” 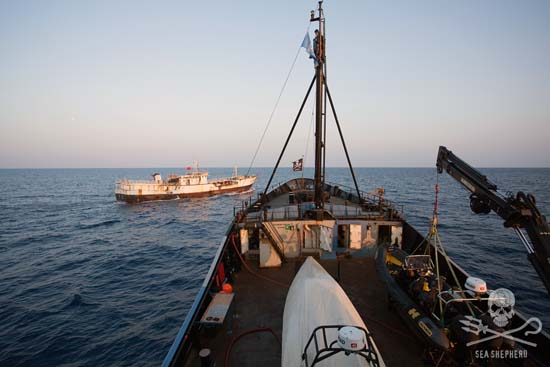 File - Fu Yuan Yu 076 cutting dangerously across the bow of the Steve Irwin. Photo: Tim WattersSea Shepherd first intervened when Captain Sid Chakravarty and his crew on board the Steve Irwin discovered, documented, exposed and pursued an illegally operating Chinese drift fleet in the Indian Ocean.

Sea Shepherd reported the activities and supplied evidence to the Peoples Republic of China.  The pursuit which began in the Indian Ocean ended in Chinese waters with the Chinese Navy allowing the Steve Irwin to continue the pursuit through the South China Sea to the coast of China. 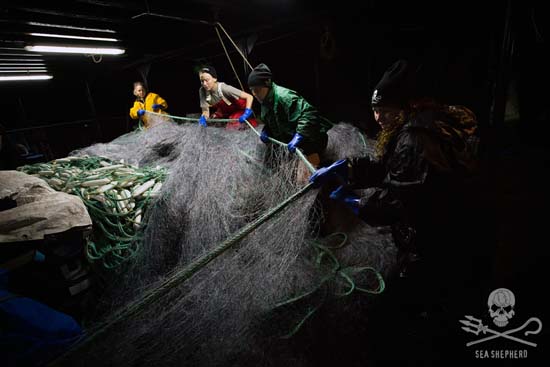 File - Crew of The MV Steve Irwin retrieve an illegal driftnet. Photo: Tim WattersCampaign leader, Captain Sid Chakravarty said, “These are severe penalties and the actions of the Chinese government clearly illustrate that they view fisheries crime very seriously. Sea Shepherd would like to thank the Chinese government for their cooperation with the investigation and we appreciate the recognition of the success by the government of China.”

Sea Shepherd has once again followed the template of coordinating international efforts to tackle international fisheries crimes and would like to credit the success of this campaign to the combined efforts of the Chinese government, INTERPOL, the crew of the Steve Irwin, Sea Shepherd Legal and Sea Shepherd Global.

Below is the email received from the Chinese Ministry of Agriculture:

First of all, on behalf of China fishery competent authority, I would like to express our sincerely appreciation for your and the Sea Shepherd Global's timely notification and constant attention regarding the case of illegal driftnet fishing by some Chinese fishing vessels in the southern Indian Ocean. We attached great importance to this case and immediately conducted a detailed and comprehensive investigation as soon as we received your email below.   I wish to take this opportunity to inform you the investigation outcomes the actions we have taken as follows.

We ordered the fishing vessels concerned to come back its home port immediately to accept investigation and conducted a port inspection and checked carefully all the related documents on board the fishing vessels, including  customs declaration, logbook, mate's receipt, cargo manifest, as well as all the information provided by your side, and talked face-to-face with some crew members of fishing vessels concerned,  we also polled the VMS track record from our platform and showed that these vessels did not  called at any other port during their return course to China. From all the evidence and information we collected we could finally draw the conclusion that three fishing vessels, namely Fu Yuan Yu 071,Fu Yuan Yu 073 and Fu Yuan Yu 076 did engage in such illegal fishing activities as driftnet fishing in the southern Indian Ocean, however, we didn't find any highly migratory species on board these fishing vessels.

According to Chinese Fisheries Law, we take the following punishment to these involved fishing vessels:

Secondly, permanently revoke the captain's certification of the three fishing vessels and imposed a penalty to each captain.

Thirdly, impose the maximum fine to each of the three fishing vessels, each equivalent to around 300 thousand US dollars.

We will also inform the results to relevant RFMOs if it is necessary.

I would like thank you for your assistance and cooperation on this case.