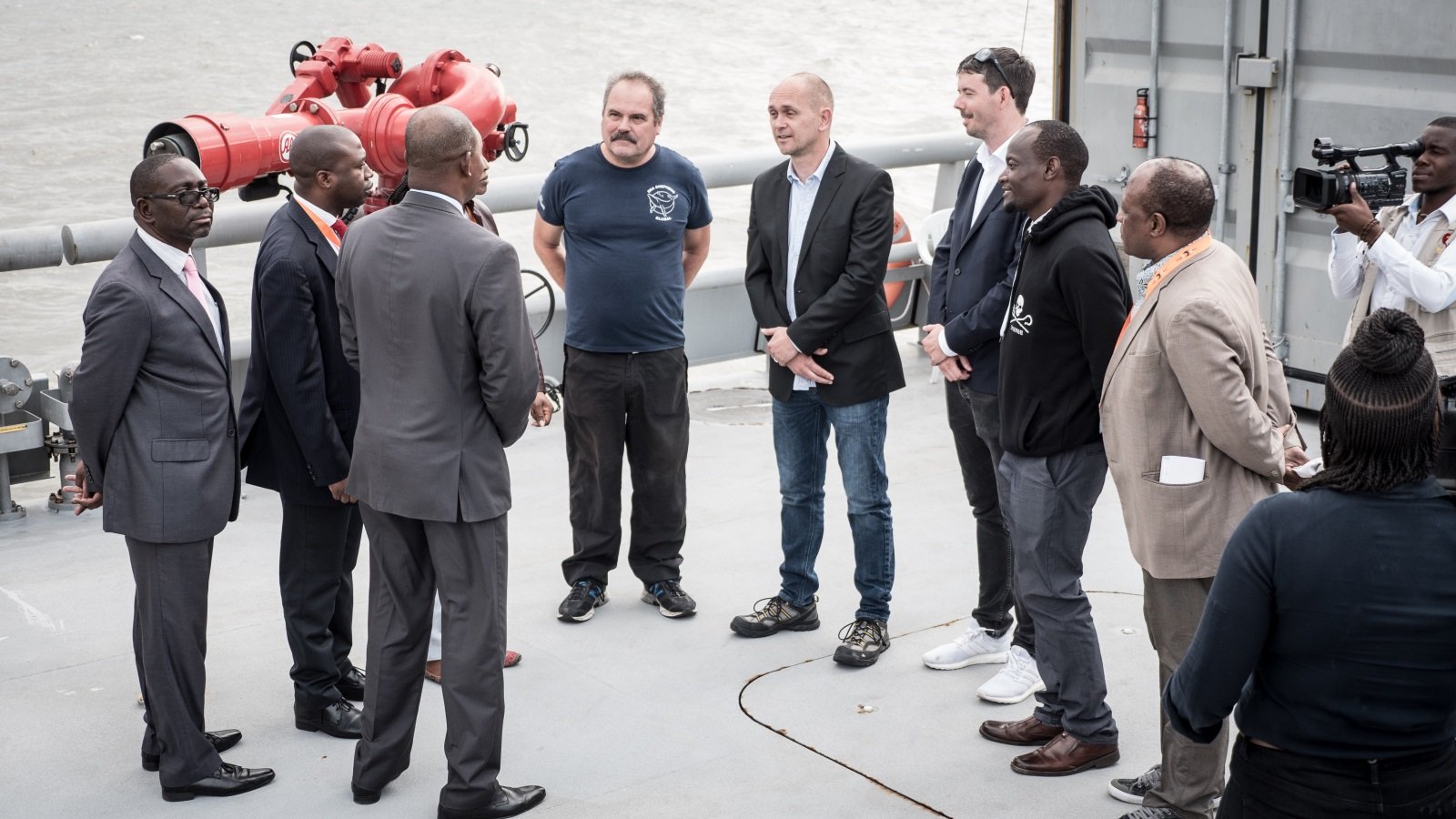 After six months of successful at-sea patrols in the waters of Tanzania, the Sea Shepherd ship M/Y Ocean Warrior arrived in Maputo, Mozambique to support a meeting between FISH-i Africa Task Force countries developing plans to bolster the fight against illegal fishing in the Western Indian Ocean Region.

Sea Shepherd's at-sea patrols in Tanzania derailed illegal fishing operations, resulting in arrests and the retreat of poachers from Tanzanian waters, successes that may now be replicated in other parts of East Africa.

The partnership, called Operation Jodari, resulted in the arrest of two long-liners for illegally shark finning, 27 dhows for smuggling and the fining of 19 vessels that retreated from Tanzanian waters to avoid boardings and inspections.

Operation Jodari was initiated by Executive Secretary Juma Mhada and the National Multi-Agency Task Team (NMATT), a unit formed in Tanzania to target individuals and networks that control environmental crime in the region and the illegal trade in wildlife. The NMATT is led by the Tanzania Police Force and includes the Tanzania Forest Services, the Wildlife Division, Fisheries Division and the Tanzania Intelligence and Security Service. Law enforcement agents with the Deep Sea Fishing Authority, Tanzanian Navy and the Tanzanian Drug Enforcement Agency joined the NMATT on board the M/Y Ocean Warrior.

At the meeting Executive Secretary Mhada told attendees, “Partnering with Sea Shepherd has enabled Tanzanian law enforcement agencies to work together on board a ship that expands policing capabilities to cover the entirety of Tanzania’s waters. Regional cooperation is key to ridding our waters of illegal fishing. I am confident that collaboration between the East African countries and civil society is the key to winning the fight against illegal fishing. I invite our neighbors to join us in this innovative partnership to save our oceans”.

The visit of the M/Y Ocean Warrior in Maputo was welcomed by Mozambique’s Minister of the Sea, Inland Waters and Fisheries, Agostinho Mondale, who noted that they are currently preparing to host the Southern African Development Community (SADC) Regional Monitoring, Control and Surveillance Coordination Centre.

In Maputo, Captain Adam Meyerson and the crew of the M/Y Ocean Warrior welcomed FISh-i Africa members and the Honorable Agostinho Mondale on board for a tour of the vessel after which the Minister stated, “as we all know, the Indian Ocean is a place of abundant and diversified fishery resources whose commercial value has made the region one of the main targets of illegal fishing in the world. We welcome the support of Sea Shepherd in the region to help rid our waters of these criminal elements.”

FISH-i Africa has supported Operation Jodari since the beginning, and has been a key actor in fostering regional cooperation on illegal fishing between East African countries. An initiative of Botswana-based Stop Illegal Fishing, FISH-i Africa brought Tanzania’s neighbors together in Maputo to discuss expanding the footprint of at-sea patrols.

Thanking Mozambique for hosting the M/Y Ocean Warrior, Peter Hammarstedt, who was joined in Maputo by Sea Shepherd Global CEO Alex Cornelissen, said, “The effect of a half-year of patrols, under the vision and leadership of a Tanzanian government driven to combat fisheries crime is clear: poachers have fled Tanzanian waters. The poachers have cleared out, illustrating the importance of forming additional partnerships in East Africa. With new countries joining Tanzania, Sea Shepherd and FISH-i Africa, we can rid the Western Indian Ocean Region of illegal fishing. East African countries are at the vanguard, showing the world how it can be done.”