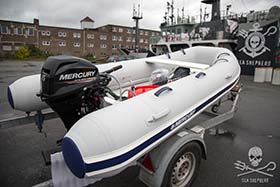 The Brigitte Bardot receives its new tender. Photo: Giacomo GiorgiAs most of you would be aware, in September this year Sea Shepherd Global launched an SOS Emergency Patrol Appeal to raise funds to replace four of our small boats, confiscated during our direct-action campaigns in the Faroe Islands.

The Spitfire, Echo and Farley, as well as the tender of the Brigitte Bardot , were seized by the Danish Navy and Faroese police in 2014 and 2015 while in the line of duty, defending the pilot whales and dolphins in the Faroe Islands.

Thanks to your generous donations, we have been able to purchase three new small boats. Even better than the boats that were seized, the new small boats are set to improve our fleet’s effectiveness at defending ocean wildlife.

A new tender has been purchased and delivered to the Brigitte Bardot, while two more Humber small boats (PDF) have been purchased and are currently undergoing final fit-outs in the United Kingdom. We will also look to purchase a fourth small boat following the outcome of the Spitfire court case in the Faroe Islands.

The incredible people at Humber inflatables have custom-made these two small boats, specially designing them for Sea Shepherd’s ocean patrols and the direct-action intervention that is required to DEFEND*CONSERVE*PROTECT the world’s oceans. The two boats will be delivered in February 2016.

On behalf of the pilot whales and dolphins of the Faroe Islands, and all of the precious marine life that we protect around the world, Sea Shepherd Global would like to extend a massive, heart-felt thank you for your generous donations, your passion, and your on-going support. It is because of you that we are able to keep our fleet strong and ready to defend the world’s oceans. 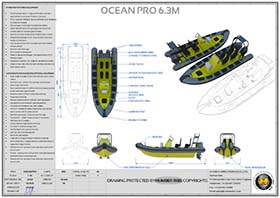 The crew of the Brigitte Bardot with the vessel’s new tender, purchased thanks to the generosity of Sea Shepherd supporters around the world. Photo: Giacomo Giorgi