The Yongding and the Songhua at Mindelo, Carbo Verde. Photo: Josephine Watmore

Military and police have boarded the last two Interpol-wanted toothfish poaching vessels, Songhua and Yongding, in Cabo Verde, an archipelago state off the northwest coast of Africa.

The action took place thanks to intelligence provided to international law enforcement by Sea Shepherd, which had been gathered two days prior in a remarkable set of chance circumstances.

On Wednesday May 20 at approximately 1500 local time, while in Cabo Verde on unrelated business, Captain Peter Hammarstedt of Sea Shepherd happened upon a vessel that was at anchorage at Mindelo, São Vicente that appeared to him to be remarkably like the wanted poaching vessel, Songhua.

Captain Hammarstedt forwarded photographs of the vessel, which at the time was carrying the name of Kadei and flagged to Sierra Leone, to the New Zealand Ministry for Primary Industries. The Ministry, which has been involved in on-going investigations into the Songhua, was able to confirm that this was in fact the outlawed vessel.

Shortly after, Sea Shepherd crewmembers stationed in Cabo Verde noticed the arrival of a second vessel at Mindelo, which had pulled into port alongside the Songhua. The vessel, which was carrying the name Luampa and also flagged to Sierra Leone, was later identified as the wanted poacher, Yongding. 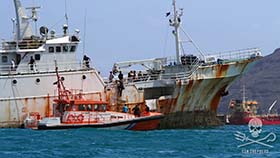 Police and military board the Youngding/Luampa in Cabo Verde. Photo: Josephine WatmoreThe Songhua and Yongding are two of six active Illegal, Unregulated, Unreported (IUU) fishing vessels that have been blacklisted for poaching Patagonian and Antarctic toothfish in the waters of Antarctica. The six vessels, which Sea Shepherd calls the “Bandit 6”, have been the target of the organization’s most recent Southern Ocean Defence Campaign, Operation Icefish, led by Captain Hammarstedt and Captain Sid Chakravarty.

Both vessels have a long and well-documented history of fisheries crimes and are suspected to have links to known Spanish crime syndicate, Vidal Armadores.

In January this year, the New Zealand Navy intercepted the Songhua and the Yongding, along with a third vessel, the Kunlun, after they were found fishing illegally in waters west of the Ross Sea. The vessels were subsequently issued with Interpol Purple Notices following a petition to Interpol from the New Zealand government.

Then in February, the Yongding was again intercepted, this time by the Sea Shepherd ship, Sam Simon, inside Australia's Exclusive Economic Zone, in possession of prohibited fishing gear. The location of the Songhua, however, has remained unknown until this time.

All six of the IUU vessels that have been the target of Operation Icefish have been located, and four are completely out of action.

Since March, authorities in South East Asia have detained three of the vessels - the Kunlun, the Viking and most recently the Perlon.

On April 6, the most notorious of the outlawed vessels, the Thunder, was scuttled by its own Captain and Officers in the waters of São Tomé and Príncipe off the west coast of Africa, following a four-and-a-half month pursuit by the Sea Shepherd ship, Bob Barker. Authorities in São Tomé and Príncipe are still holding the Captain, Chief Engineer and Duty Engineer of the Thunder as investigations continue.

Captains Hammarstedt and Chakravarty have called on authorities to ensure that the outlawed vessels are detained in Cabo Verde, and the Captain and Officers of the vessels are fully investigated.

“We are now looking at the very real prospect of being able to completely rid the Southern Ocean of the Bandit 6 for good. We urge all relevant authorities to take advantage of this opportunity; to fully investigate the Songhua and the Yongding, to ensure that those behind the operations are held accountable for their repeated fishing offences, and that the vessels are detained, thereby eliminating any possibility that they will be used in further illegal operations in Antarctica,” said Captain Hammarstedt.

“The successes of Operation Icefish clearly demonstrate that Sea Shepherd's arsenal in the fight against poaching extends far beyond high-seas patrols. We have the tools and the experience required to eradicate IUU fishing operations from the Southern Ocean. With the welcomed cooperation from law enforcement authorities, coordinated by the expertise of the Environmental Crime Unit of Interpol, that's exactly what we will do,” said Captain Chakravarty.

Operation Icefish was Sea Shepherd's 11th Southern Ocean Defense Campaign, and the first to target IUU fishing operators in the waters of Antarctica. 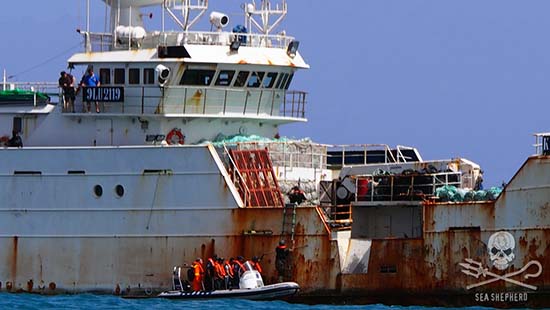 Sea Shepherd intel led to the boarding of the Songhua/Kadei. Photo: Josephine Watmore