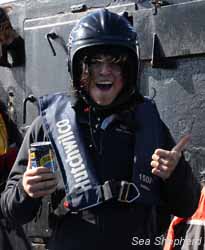 Michelle RodriguezA woman of her word, Hollywood starlet Michelle Rodriguez, joined Sea Shepherd Conservation Society as a crewmember onboard the Steve Irwin in Fremantle, West Australia. With plans to join Sea Shepherd’s anti-whaling campaign for the full three-months in the Winter of 2011/12, Rodriguez proved that she is ready and more than up to the challenge.

The adventure for Rodriguez started right away, as the ship encountered rough weather resulting in two days of seasickness for her at the beginning of the journey. Rodriguez said her role has “not been easy,” but she managed to prove she’s just as tough as the femme fatale characters she portrays on the silver screen. After Rodriguez earned her sea legs, she took part in crew duties including working on deck, observing on the bridge, and training to safely launch and operate the small Zodiac boats.

“I got to drive a tender yesterday which is the little motor ship that Sea Shepherd’s drive to get in close proximity of the Shonan Maru,” Rodriguez said.

“I saw his ship, and I was like what the hell is Sea Shepherd doing in Cannes?” She called on friend Olivier Martinez, whose cousin was coincidentally involved in Sea Shepherd's Operation Blue Rage Bluefin Tuna campaign in the Mediterranean, and asked him to connect her with Sea Shepherd founder Captain Paul Watson.

One thing led to another, “He made a phone call, and next thing you know I’m meeting Paul Watson, and then I’m donating my time, and now I’m planning on joining their campaign next year,” she said.

Passionate in preserving marine mammal wildlife, Rodriguez offered to lend her public profile and support to the organization in a variety of ways. She has since partnered with Sea Shepherd on several fundraisers and events, earning their respect as a tireless and effective supporter. But after a week on the Steve Irwin, it became more clear to her than ever that it was the at-sea experience she was really after; she wanted to be on the frontlines of the campaign and get her hands dirty.

Rodriguez was unable to commit to the full campaign this season due to a filming schedule conflict and is forced to say goodbye to the Steve Irwin crew in Hobart. Come next year, she hopes to be onboard for the long showdown with illegal Japanese whaling ships.

“I can’t wait!” Rodriguez told reporters, “I just couldn’t think of a better reason to do something like that. Unconditional love, what better reason? I will dedicate my sweat and my time to the preservation of life because I just can’t sit back and not do anything knowing how wrong it is to not care about tomorrow.”

The Steve Irwin is currently in final preparations for the official launch of Operation No Compromise along with the Bob Barker and newly acquired trimaran Gojira. All three ships are set to embark in early December for the Southern Ocean Whale Sanctuary to confront the illegal whalers and thus save endangered whales from greedy slaughter.