Massive Victory in the Fight Against Illegal Fishing 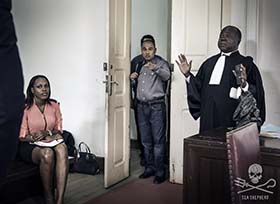 Jail time and massive fines for Captain Luis Alfonso Rubio Cataldo, Chief Engineer Agustin Dosil Rey and Second Mechanic Luis Miguel Perez Fernandez.
Photo: Simon AgerOn Monday, the Supreme Court of São Tomé and Príncipe found three officers of the notorious toothfish-poaching vessel, Thunder, guilty of forgery, pollution, damages to the environment and recklessness. The three have been sentenced to between 32 and 36 months in jail each for recklessness and forgery, and have been fined 15 million euros for charges relating to pollution and damage to the environment.

Captain Luis Alfonso Rubio Cataldo of Chile, Chief Engineer Agustin Dosil Rey of Spain and Second Mechanic Luis Miguel Perez Fernandez, also of Spain, were detained in São Tomé and Príncipe following the sinking of the Thunder in the Gulf of Guinea on April 6 this year. The three stood trial in September and remained in custody pending today’s verdict.

The landmark case is one of the first instances of a poaching crew being tried in São Tomé and Príncipe. The guilty verdict and significant sentences are a victory in the battle against Illegal, Unreported, Unregulated (IUU) fishing, and indicate the seriousness with which these crimes are now being regarded in the region.

The Thunder was one of six vessels known to be involved in IUU fishing for Antarctic and Patagonian toothfish in the Southern Ocean. The vessels, which Sea Shepherd calls the “Bandit 6,” were the focus of the organization’s 11th Southern Ocean Defense Campaign, Operation Icefish.

At the time it sank, the Thunder had been the target of a 110-day, record-breaking continuous pursuit by the Sea Shepherd ship, the Bob Barker. Sea Shepherd has consistently maintained that the Thunder was intentionally scuttled in an effort to hide its cargo of vulnerable toothfish, illegally caught in a region managed by the Commission for the Conservation of Antarctic Marine Living Resources (CCAMLR).

Since 2006, the Thunder has been on the IUU vessel list of CCAMLR and was blacklisted from fishing in the CCAMLR regulated area. In 2013, the vessel also became the subject of an Interpol Purple Notice for suspected illegal fishing activity following a joint effort by New Zealand, Australian and Norwegian authorities 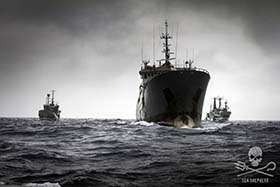 In 2013, the Thunder became the subject of an Interpol Purple Notice for suspected illegal fishing activity.
Photo: Simon AgerThe Bob Barker, Captained by Peter Hammarstedt of Sweden, and fellow Sea Shepherd ship, Sam Simon, Captained by Sid Chakravarty of India, rescued the Thunder’s entire crew of 40, who all disembarked to life rafts before the vessel sank.

Before the Thunder was fully submerged, members of the Sea Shepherd crews were able to board the vessel and collect evidence from the sinking ship, including a frozen toothfish that was later handed over to police.

Sea Shepherd has played a keen role in delivering justice to the officers of the Thunder, ensuring that loopholes commonly used to avoid prosecution could not be exploited.

Captains Hammarstedt and Chakravarty reported details of the incident and rescue operation to the relevant authorities in São Tomé and Príncipe and Germany, along with international policing organization, Interpol. As a result of this information, the entire crew of the Thunder was detained on arrival in São Tomé and Príncipe, where the Captain and two officers have been held ever since.

The meticulous hand-over of the evidence and the maintenance of the chain of custody have ensured that this success in the case against the Thunder has been achieved.

The Sea Shepherd Captains, along with Sea Shepherd photographer Simon Ager, who was one of the Sea Shepherd crew who boarded the sinking Thunder, were also among those who gave evidence at the trial of the three officers. The Sea Shepherd witnesses were in court for seventeen hours while giving their testimonies and cross-examination.

Of the trial, Captain Hammarstedt stated, “Although São Tomé and Príncipe lacked the jurisdiction to directly address the case of illegal fishing in the Antarctic, they showed the courage and willingness to still tackle it indirectly as seen with the charge of falsification of the fishing license. In doing so, they have set an example to other nations around the world in the fight against the endemic issue of IUU fishing.”

Sea Shepherd has congratulated authorities in São Tomé and Príncipe for their timely response to the matter and commitment to seeing the poachers brought to justice.

“The coordination required between international agencies, including Sea Shepherd, and local law enforcement that has resulted in these convictions is a mammoth task and could not have been achieved without the will of São Tomé and Príncipe, driving the investigations forward. My congratulations goes to all involved on achieving such an incredible result in such a short amount of time,” said Captain Chakravarty.