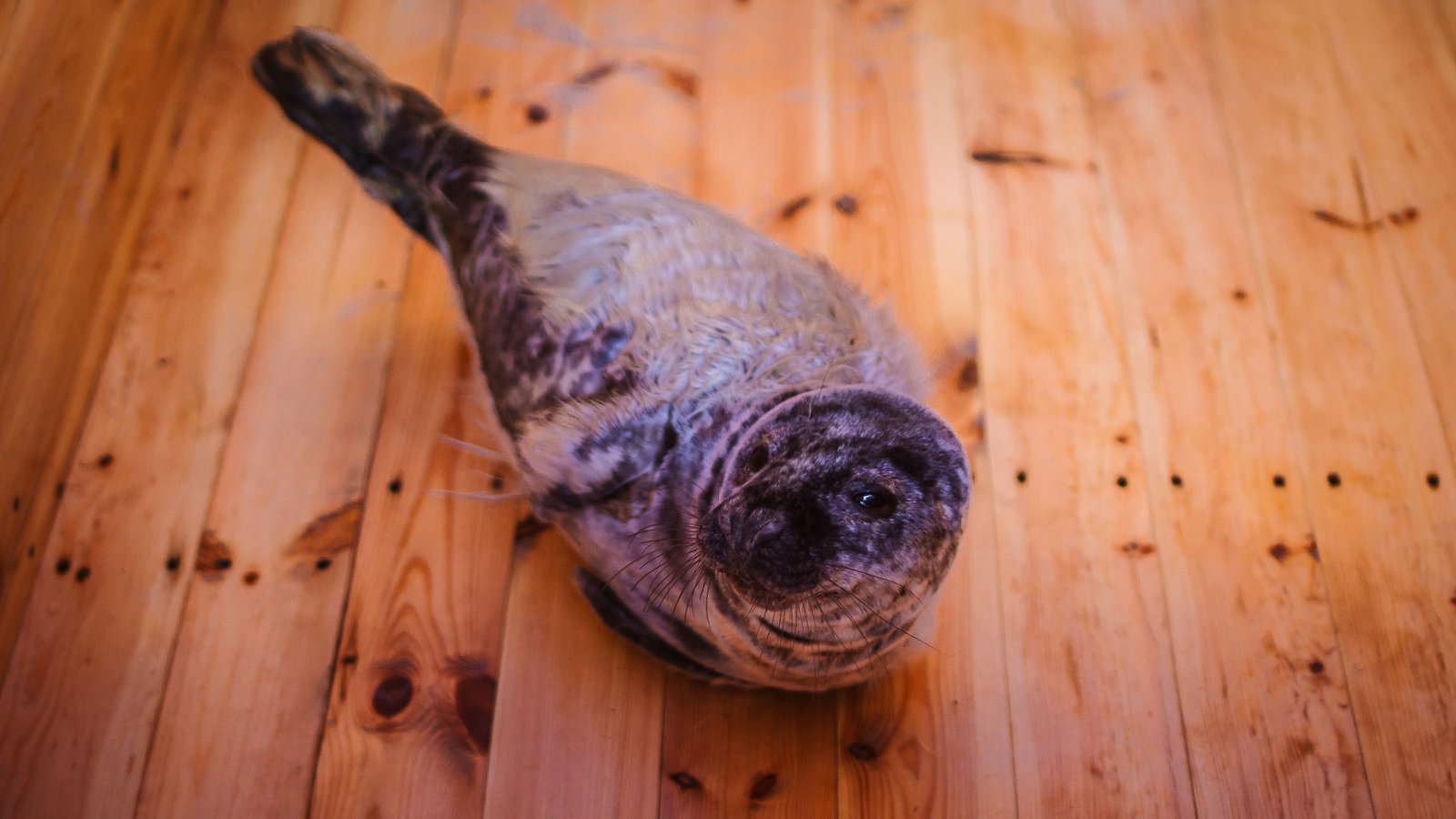 Hel, Poland -- On the evening of April 26th, the crew of the M/V Emanuel Bronner got an emergency call from the local seal rescue station to assist in the rescue of a gray seal pup. The animal was abandoned by its mother for several hours, locals called the station for help. When a gray seal pup is left alone for such a long time, it can die within a week due to the lack of the mother’s milk. It contains lots of fat, which the pups need to obtain their fatty layer which protects them from the cold Baltic waters.

The pup was found on the south side of the Gulf of Gdansk, which is a drive of around 2 hours by car in each direction. With the M/V Emanuel Bronner the crew could go there in only 1 hour, passing Poland’s largest seal colony on the way. The 300 individuals of the colony are mostly spotted on sandbanks in the southern part of the gulf. The rescue went quick and without complications. The locals who reported to the seal rescue station already awaited the arrival of the crew, with the pup in a basket ready for the transport. It is important to operate quick and professional to avoid high stress levels for the animal. The basket will not be opened until the animal is brought to the station safely. In the station the keepers checked the pup, it was healthy and weighted 15 kg. Every seal that reaches a weight of 30 kg and is able to hunt by itself will be released into the wild. To know more about the behavior of the gray seal population, each individual that was in the station is tagged with GPS locators which they lose after one year, and a chip so they can be identified if they are found dead. The station gave the pup whose rescue the M/V Emanuel Bronner assisted the name “Shepherd”. Beginning of June, “Shepherd” was released into the wild in a very healthy condition. He will now live with Poland's largest seal colony. 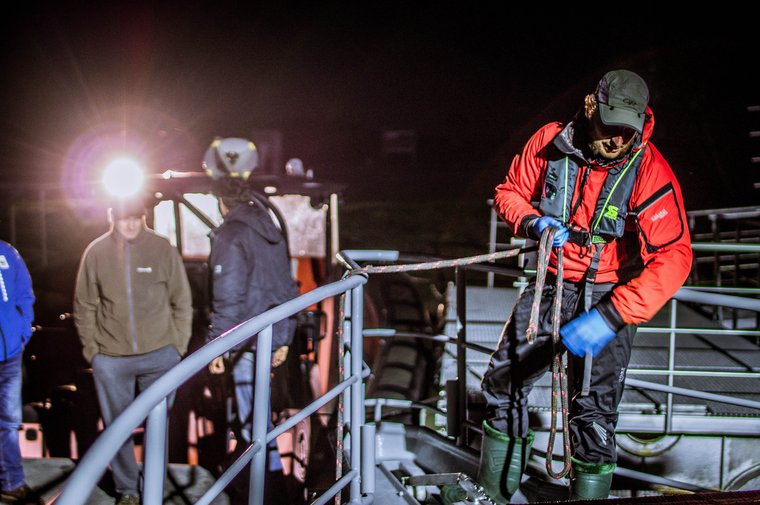 The crew is heading out to rescue the gray seal pup during the night. Photo by Sea Shepherd.

But not everyone welcomes the return of the mighty predators to southern Baltic. Fishermen claim that gray seals are to blame for the declining catch in the fisheries. Despite the animals being under special protection, there have been reports of fishermen beating the animals with clubs or drowning them. On top of that, the animals get fatally bycaught in gillnets and suffer serious injuries from other fishing gears. Numerous seals are brought to the rescue station, with fishing hooks in their mouth or even worse: in their digestive system. Not only once it happened, that the animals die from their severe injuries. In May a pup died in the station due to an open wound on its head, most likely caused from being beaten by a human. Only two days later another pup was brought in with the same type of injury. 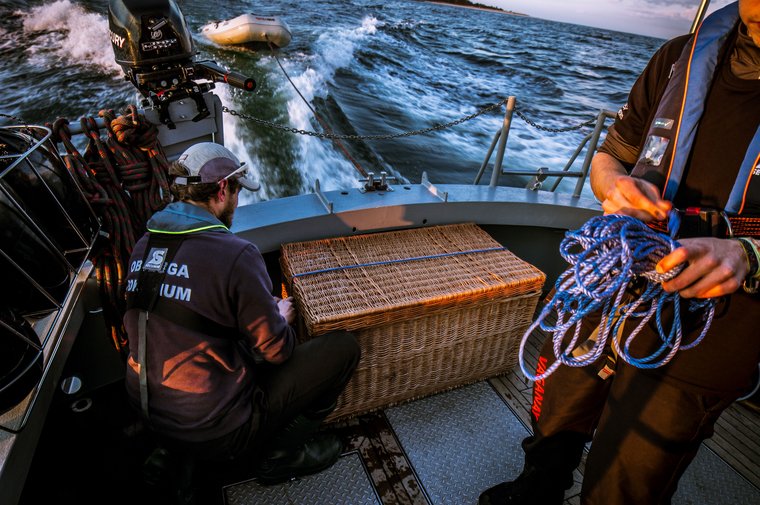 The seal pup is transported safely in a basket on the M/V Emanuel Bronner. Photo by Sea Shepherd.

Sea Shepherd appreciates the effort of the rescue station to recover the seal population in Polish waters, and is calling for more controls and protection measures from side of the government. Animals under the status of special protection may not be killed or disturbed in any way. The gray seals are claiming back their habitat, and they are only at a fraction of the historical population size. Humans brought them close to extinction once already, we have to learn from history and effectively prevent this from happening again. 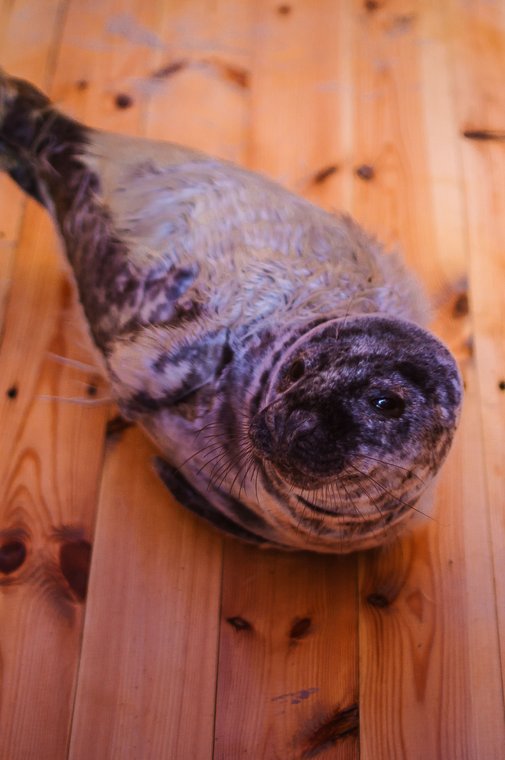