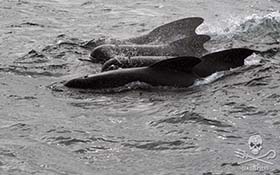 While official kill figures are yet to be released, estimates from the grindmaster indicate that as many as 150 individual pilot whales were in the slaughtered pod, making this one of the bloodiest grinds in at least two years.

The slaughter occurred just two weeks before Sea Shepherd crews are due to arrive in the Faroe Islands for the commencement of the organization’s 2015 Faroe Islands pilot whale defense campaign, Operation Sleppid Grindini.

The ordeal commenced at approximately 0400 local time when the Faroese Fisheries Patrol vessel, Brimil, located the large pod south of the island of Vágar. Over the next four to five hours, as many as twenty-five hunting boats drove the pod, finally herding them on to the beach of Miðvágur where the grind eventually took place.

CEO of Sea Shepherd Global, Alex Cornelissen, said, “The beaches of the Faroe Islands are once again red with the blood of hundreds of slaughtered pilot whales. Without the presence of Sea Shepherd, shining a spotlight on these ferocious shores, this massacre will continue, unabated. We will ensure that the world cannot ignore this ocean massacre.”

Land Team Leader, Rosie Kunneke, stated, “For more than four long, grueling hours, these animals fought for their lives. They were harassed, they were tortured, and then they were brutally killed in the presence of their family members. This is not tradition. This is a bloodbath.”

For hundreds of years the people of the Faroe Islands have been herding migrating pilot whales from the sea into shallow water and slaughtering them. The slaughter, known by the Faroese term 'grindadráp' or 'grind', wipes-out entire family groups of whales and dolphins at one time.

Operation Sleppid Grindini will be Sea Shepherd’s sixth campaign in the Faroe Islands. Led by the Sea Shepherd ships the Bob Barker, Sam Simon and Brigitte Bardot, and supported by a dedicated land team, the campaign marks the organization’s strongest at-sea presence in the region to date. 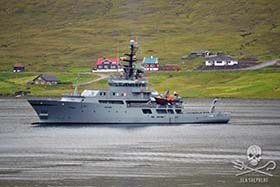 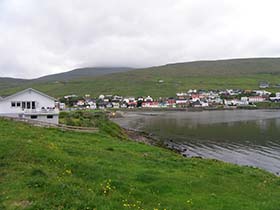 The beach of Miðvágur where 150 pilot whales met their death on June 6 in the first grindadráp of 2015. By Eileen Sanda (Wikimedia Commons)
Tweet