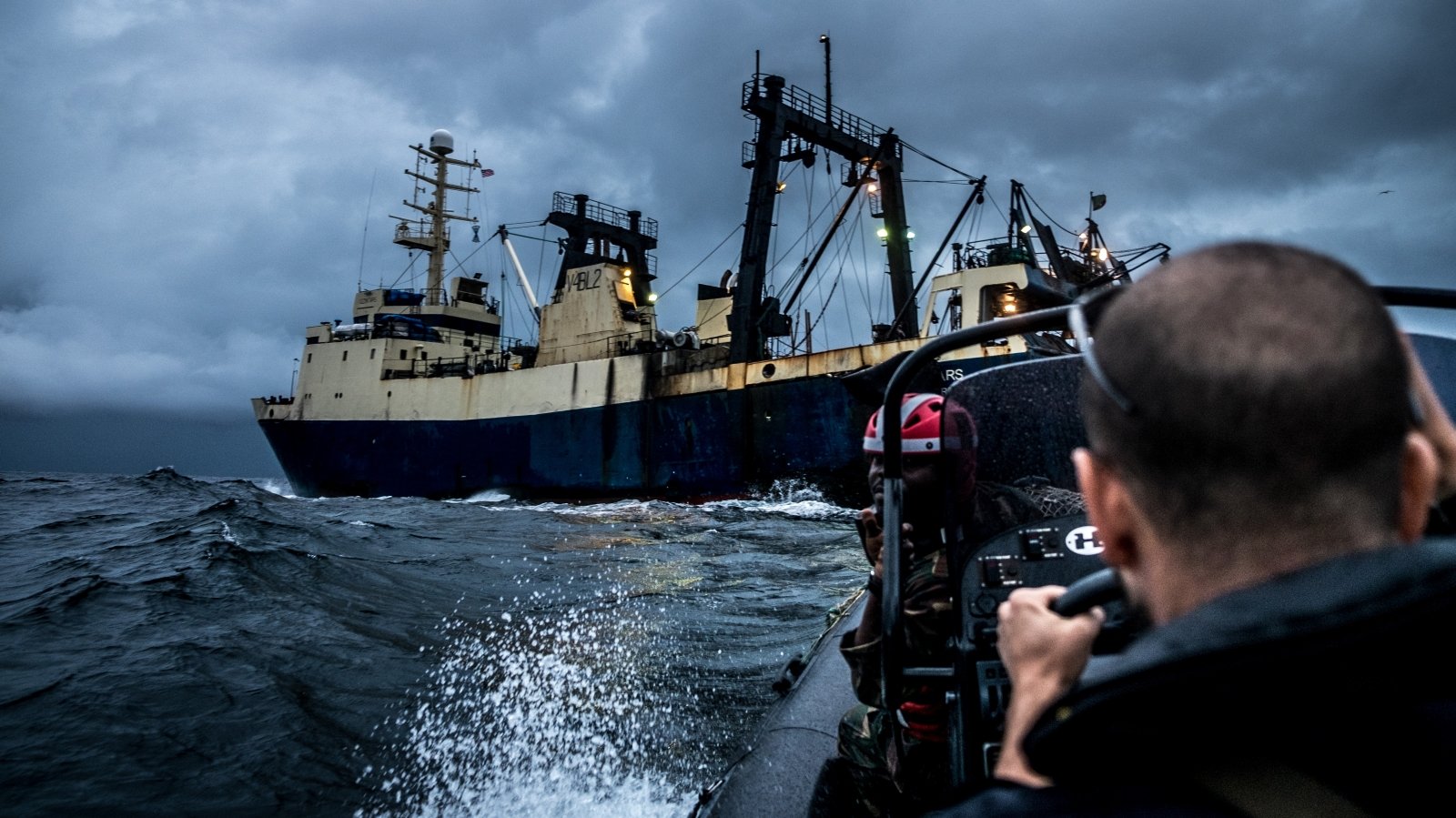 In a joint operation with the Liberian Ministry of National Defense to tackle illegal, unreported and unregulated (IUU) fishing in the Republic of Liberia, West Africa, Sea Shepherd Global has assisted the Liberian Coast Guard to arrest a St Kitts and Nevis-flagged trawler for fisheries crimes including fish smuggling and violations of tax and customs laws.

The F/V Dzintars, a 56.11meter trawler, was boarded by the Liberian Coast Guard on the 28th of September, after the vessel shut down their Automatic Identification System (AIS) before crossing from neighboring Sierra Leone into Liberian waters. AIS is a tracking system that allows vessels to be identified by vessel traffic services including law enforcement. The F/V Dzintars stopped transmitting their identifying details and position four miles before entering Liberian waters.

The Liberian Coast Guard boarded the F/V Dzintars with the assistance of the Sea Shepherd vessel M/Y Sam Simon. After checking the vessel’s paperwork, the boarding team found that they had not declared their catch upon entering Liberian waters, a violation of Liberia’s “Catch On Entry” regulations. The vessel was also found to be without a landing declaration or the proper Liberian Import Permit for Fish and Fish Products as required under Liberian law to discharge the catch in Monrovia, the vessel’s next declared port.

Given that the Master of the vessel had deliberately turned off the AIS before entering Liberian waters, had not declared “Catch On Entry” as required by Liberian Fisheries Regulations, and did not have an Import Permit for Fish and Fish Products as required under Liberian Law, the F/V Dzintars was arrested on suspicion of illegal and unreported fishing with the criminal intent of avoiding tax and customs laws in Liberia. A wild monkey was also found on board in the fish processing plant, for which there was no paperwork provided. The vessel was detained at the Liberian Coast Guard base in the Port of Monrovia.

For the past four weeks, the marine conservation organization Sea Shepherd has been secretly patrolling the waters of the Republic of Liberia in West Africa in a covert operation under the coordination of the Honorable Minister Brownie Samukai.  Sea Shepherd’s vessel the MY Sam Simon is patrolling Liberia’s coastline with 19 crew under Captain Bart Schulting, ten Liberian Coast Guard sailors with the authority to board, inspect and arrest ships suspected of violating Liberian law, and two Israeli maritime advisors and conservationists providing training assistance.

“The Liberian Coast Guard continues to be at the forefront of protecting Liberia’s sovereign waters from those who circumvent our law and regulations. The Ministry of National Defense sees fisheries crimes as both a maritime security issue and a national security issue and thus combatting IUU fishing is a priority for the Ministry of National Defense.”

Named Operation Sola Stella, the campaign resulted in the arrest of five IUU fishing vessels earlier this year, including a Nigerian-shrimping trawler certified to export “sustainably-caught” shrimp into the European Union and a refrigerated cargo vessel of identity fraud and planning to offload 460 tons of undocumented fish cargo in the Port of Monrovia.

“Effective law enforcement requires constant pressure and that is why Sea Shepherd has decided to return to Liberia. Although we essentially shutdown IUU fishing in Liberia earlier this year with the arrest of five vessels, it’s clear that some operators are still flaunting Liberia’s laws and regulations in pursuit of profits,” said Sea Shepherd Director of Campaigns Peter Hammarstedt. “We commend the Honorable Minister of National Defense for his steadfast resolve in prioritizing fisheries crime and bringing fishing pirates to justice.”

Developing countries are particularly vulnerable to IUU fishing, which accounts for up to 40% of the fish caught in West African waters. This campaign will help Liberia crack down on unlicensed foreign industrial vessels operating in its waters and protect the six nautical miles closest to shore reserved for subsistence, artisanal and semi-artisanal fishing, which employs 33,000 Liberians.

In 2016 Sea Shepherd partnered with the government of Gabon for Operation Albacore, resulting in over 80 fishing vessel inspections at sea and the subsequent arrest of five IUU Congolese fishing trawlers and one Spanish long-liner. Operation Sola Stella is a continuation of Sea Shepherd Global’s commitment to work with national governments to help end IUU fishing.