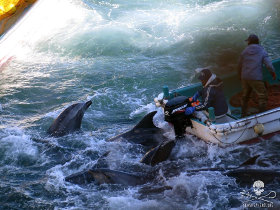 With this decision, JAZA will remain a member of the World Association of Zoos & Aquariums (WAZA), which prohibits its members from acquiring cetaceans captured in Taiji. Of the 142 votes collected from JAZA members, a staggering 99 voted to stay with WAZA.

While not yet an end to the drive hunt, this announcement brings great news for the dolphins in Taiji, because the captive trade represents the true money behind the slaughter that turns the waters of the cove red with blood. With the elimination of the demand for Taiji dolphins from Japanese aquariums, Taiji’s hunt is one huge step closer to being sunk economically.

Sea Shepherd Conservation Society first exposed Taiji’s brutal hunt in 2003, releasing shocking undercover photographs and footage of a blood red cove and skiffs piled high with dead dolphins seen around the globe. Beginning in 2010, Sea Shepherd’s Cove Guardians took up stations along the shores of the cove daily throughout the entire six-month hunt season and have done so every season since as part of the annual Operation Infinite Patience campaign, acting as ocean sentinels and documenting and live streaming every capture and every slaughter for the world to see.

Time and time again, Sea Shepherd has documented the inextricable link between captivity and the slaughter. Despite claims from Taiji, the dolphin killers and dolphin trainers regularly work side-by-side to choose the “prettiest” dolphins (those without visible scars) to be sold for captivity, while other members of the pods are simultaneously slaughtered. These highly intelligent, socially complex marine mammals are forced to witness their family members killed before their very eyes and swim in the blood of their mothers, fathers, sisters and brothers.

JAZA’s decision will significantly decrease the demand for dolphins captured in Taiji, and it is Sea Shepherd’s hope that other aquariums and marine parks around the world will follow suit and stop buying these dolphins captured from their ocean home so brutally.

Global outcry in response to the brutal nature of Taiji’s massacre of ocean wildlife is what has brought about these steps from both WAZA and JAZA. Sea Shepherd has maintained that it is gaiatsu, or external pressure, that will end the slaughter in Taiji, not pressure from within Japan.

Sea Shepherd wishes to extend thanks to our celebrity Cove Guardians, Shannen Doherty and Simone Reyes, who helped to shine a bright, international spotlight on this important issue. We also celebrate today’s news in honor of the late Sam Simon, whom we are sure would have been overjoyed for the dolphins he loved so dearly, and for whom he traveled to Taiji in 2014 despite his battle with terminal cancer.

Finally, Sea Shepherd wishes to thank every Cove Guardian who has stood with us for the dolphins in Taiji, bearing witness to these atrocities committed against the world’s wild, migrating dolphins in Japan’s waters. We thank you for your compassion, selflessness and your Infinite Patience that has helped make this day possible. Sea Shepherd also wishes to thank our Senior Cove Guardian Leader Melissa Sehgal who, with her unwavering dedication to this campaign, has led and inspired our team on the ground for four seasons and helped to bring about massive awareness, which undoubtedly has led to this significant change. Sea Shepherd will continue to monitor the hunt in Taiji until the slaughter is brought to a permanent end. We hope that you will continue to stand with us and, most importantly, with the dolphins.