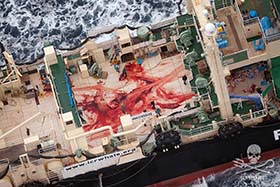 The bloody deck of the Nisshin Maru, this is the reality of Japanese Government's 'research'. Photo: Eliza MuirheadToday, the Japanese whaling fleet heads for the Southern Ocean in a blatant disregard for both the International Court of Justice ruling and global sentiment against the slaughter of whales. The fleet this year will conduct 'non-lethal research' and begin the preparations to return to full scale whaling next year.

"The Japanese whale poachers have once again departed for the Southern Ocean. Clearly this year's expedition is nothing but a scouting trip in preparation for the resumption of poaching operations in the 2015/2016 season. Despite the verdict at the International Court of Justice in the Hague that prohibits Japan from killing whales under the JARPA II program, Japan has decided to circumvent the court's decision and continue to flaunt international regulations. It seems the Japanese whaling fleet is hell-bent to ignore the wishes of the international community and to deepen their isolation on the topic of whaling. What should have ended continues, a criminal operation funded by Government subsidies," said Captain Alex Cornelissen, Chief Executive Officer, Sea Shepherd Global 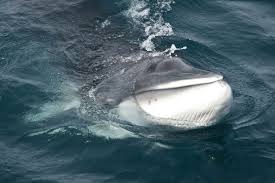 A minke whale, the main target for slaughter by Japanese Government in 2015/16 Photo: Tim Watters"The publication of the new research plan combined with the scouting exercise for this year is proof that Japan has just one motive to be in Antarctica and that is to kill whales. International commissions, courts and sentiments have seemingly no effect on their intent to seek out and destroy this safe haven for the whales at the bottom of the world. Japan stands alone in their quest to see the bang of the grenade-tipped harpoons triumph over the silence of harmony in this great whale sanctuary," said Sid Chakravarty, Captain- MY Sam Simon.