The Scientific Committee of the International Whaling Commission (IWC) has blocked Japan from moving forward with its proposed NEWREP-A whaling program, demanding more information to clarify uncertainties about the program’s scientific objectives.

In a report released today, the IWC has found that the Japanese government has failed to provide evidence to support the continued slaughter of whales in Antarctica.

CEO of Sea Shepherd Global, Captain Alex Cornelissen, is encouraged by the findings, but has urged the Committee to completely reject Japan’s attempts to renew commercial whaling under the NEWREP-A plan.

“For years the Japanese government has continued to kill whales illegally in Antarctica, using a scientific loophole to attempt to justify its deplorable poaching operations. Spearheaded by ten years of direct action by Sea Shepherd, which have shone an international spotlight on Japan's illegal whaling operations, we are now one step closer to closing that loophole for good. Our hope is that the Committee will see NEWREP-A for what it really is – another attempt by Japan to revive its illegal, commercial whaling operations in the Southern Ocean, hidden under a bogus claim to science. We urge the IWC to uphold the parameters of international law, which have been reinforced by the ruling of the International Court of Justice, and ensure that the government of Japan is not able to continue its whale poaching operations,” he said.

It is the second official set back for the NEWREP-A program this year. In April, an independent expert panel that advises the IWC also held that NEWREP-A does not contain enough information to justify the continued slaughter of whales in Antarctica.

The NEWREP-A program was developed following a landmark opinion handed down by the highest international court, the International Court of Justice (ICJ), in March 2014. Following a four-year long legal challenge by Australia and New Zealand, the Court determined that Japan's previous whaling program, JARPA II, which had been in place since 2005, was in fact an illegal, commercial operation and, therefore, ordered that it immediately cease.

“In light of its continual defiance of international law, the Japanese government faces the very real danger of positioning itself as a rogue state – a position that reflects poorly on the entire country, well beyond the issue of illegal whaling. It's time for Japan to move forward and repair its international reputation; to join the rest of the world in the 21st century, leaving its commercial whaling operations behind in the history books, where it belongs,” said Captain Cornelissen. 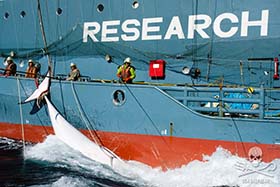 One of the thousands of whales killed illegally by the Japanese whale poaching fleet in Antarctica.
Photo: Glenn Lockitch 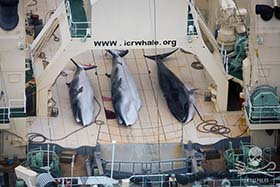