Interpol Takes Custody of Evidence Against Thunder From Sea Shepherd 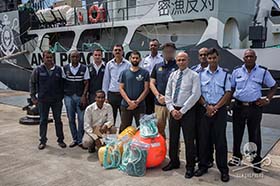 The final pieces of evidence, including sections of the illegal gillnet, buoys, nets, lines and anchor shackles were collected by local authorities at Port Louis, Mauritius under the direction of a Criminal Intelligence Officer from international policing organisation, Interpol.

Local police, Coast Guard, the Scene of Crime officers, Mauritian Fisheries officers, as well as other local and international Interpol officials, worked together to close-out the final parts of the investigation.

Captain Chakravarty said, “We have come to the conclusion of what has been an extremely successful cooperative exercise with Interpol and local law enforcement authorities in Mauritius. The proceedings have been undertaken in a thorough and stringent manner that reflects the gravity of the offences committed by Thunder. With national and international policing agencies on high alert, now armed with the evidence from the indefatigable efforts of the Sea Shepherd crews over the past three months, the Thunder is at the end of its long and destructive past.”

The Sam Simon arrived in Mauritius last Wednesday. Since then, Captain Chakravarty and the crew of the Sea Shepherd ship have been assisting authorities with their on-going inquiries into the illegal fishing activities of the Thunder.

In December 2013, the Thunder was issued with an Interpol Purple Notice for suspected illegal fishing activity following a joint effort by New Zealand, Australian and Norwegian authorities.

On December 17 2014, the Sea Shepherd ship, Bob Barker, intercepted the Thunder on the Banzare Bank in Antarctica. The Thunder immediately fled from the Bob Barker, leaving behind thousands of metres of illegal fishing gear in the Southern Ocean.

Since then, the Bob Barker has maintained pursuit of the Thunder, today marking day 79 of what has become a record-breaking, continuous chase of the poaching vessel. 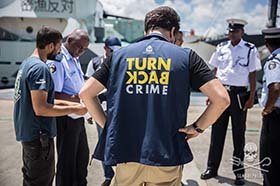 Sea Shepherd works with authorities to hand-over final evidence of the Thunder's illegal fishing activity. Photo: Jeff WirthCaptain of the Bob Barker, Peter Hammarstedt, said, “With such a proactive response from international and local law enforcement in Mauritius, we are more determined than ever to maintain our pursuit of the Thunder; to secure its delivery to authorities in the next port and to assist in every way possible to ensure these criminals are prosecuted to the fullest extent of the law.”

On December 25 2014, the Sam Simon commenced retrieval operations to remove the illegal fishing gear abandoned by the Thunder from the waters of the Banzare Bank. More than 72 kilometres of illegal gillnet was recovered over a three week period and over 1,400 fish, weighing a total of 45,000 kilograms, were returned to the ocean.

The Thunder is the most notorious of the six remaining toothfish poaching vessels that are known to engage in Illegal, Unreported and Unregulated (IUU) fishing for toothfish in the Southern Ocean.