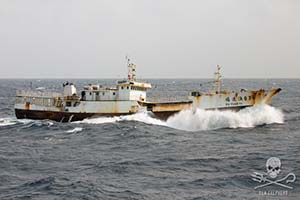 The Fu Yuan Yu 076 has been documented actively engaged in the destruction of evidence with relation to its illegal fishing gear, in blatant violation of Chinese law. Photo: Tim WattersOn March 29, 2016 at 2027 UTC, the illegal fishing vessel Fu Yuan Yu 076 entered the port of Zhuhai in Guangdong Province in position 22 Degrees 02 Minutes (North); 113 Degrees 04 Minutes (East).

This is the second attempt made by the vessel in as many days to call a port after trying to enter Xincun harbour yesterday, and the first instance in which the vessel is well inside of China's jurisdictional control.

Sea Shepherd’s Flagship, Steve Irwin, which is in pursuit of the poaching vessel, has reported the Fu Yuan Yu 076’s position to the Chinese government, providing authorities with an immediate opportunity to arrest and investigate the vessel.

Operation Driftnet Campaign Leader and Captain of the Steve Irwin, Siddharth Chakravarty, said, "The Chinese authorities made a strong commitment to combat illegal fishing by recalling the six Chinese registered Fu Yuan Yu vessels after Sea Shepherd submitted an initial report on their illegal activities in January, 2016. It is now time for the Bureau of Fisheries of the People's Republic of China to crack down on the errant vessels and punish the offenders. The vessels are registered in China, are within Chinese waters and China has complete authority over them. With all the evidence submitted to the authorities, I am confident that the vessel will be found guilty as charged."

The Bureau of Fisheries had previously ordered the entire Fu Yuan Yu fleet to return to its homeport of Fu Zhou to face an investigation. However, the Fu Yuan Yu 076 has defied the orders of the Chinese government by pulling into a more southern port, instead of heading directly to Fu Zhou.

Now out of visual range of the Steve Irwin, it is likely that the Fu Yuan Yu 076 will offload its illegal catch of shark fins and critically endangered Southern Bluefin tuna.

The Steve Irwin intercepted the Fu Yuan Yu 076 on March 13, 2016 on the Ninety East Ridge on the high seas of the Indian Ocean. For the last 18 days the Sea Shepherd ship has been in pursuit of the poaching vessel. During this pursuit, the Fu Yuan Yu 076 has been documented actively engaged in the destruction of evidence with relation to its fishing gear, in blatant violation of Chinese law.

Over the last week the Fu Yuan Yu 076 has shown signs of trying to shake the tailing Steve Irwin by manoeuvring aggressively, requesting for an intervention from the Chinese Navy, as well as using the cover of darkness to evade the Sea Shepherd ship.

Sea Shepherd has learnt that the company running the Fu Yuan Yu fleet is the Dongxinglong Ocean Fishing Company LTD, based in Fu Zhou, Fujian Province, China. The company has multiple vessels operating in the Pacific, Indian, and Atlantic Oceans, mainly targeting tuna.

Captain Chakrvarty added, “The Fu Yuan Yu 076 is owned by a large fishing company, and with the vessel now calling the port of Zhuhai it is clear that the poacher is receiving logistical support from the owners. This is now not just a case of a crime committed on the high seas, but multiple crimes being committed inside of China to hide the facts that prove the vessel’s illegality.”

The Steve Irwin is currently located outside the port limits, monitoring the movements of the Fu Yuan Yu 076 on radar. Should the vessel try and run for open waters, the Steve Irwin will once again resume the pursuit of the vessel. 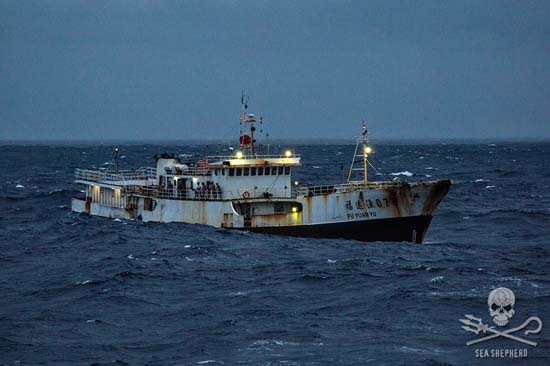 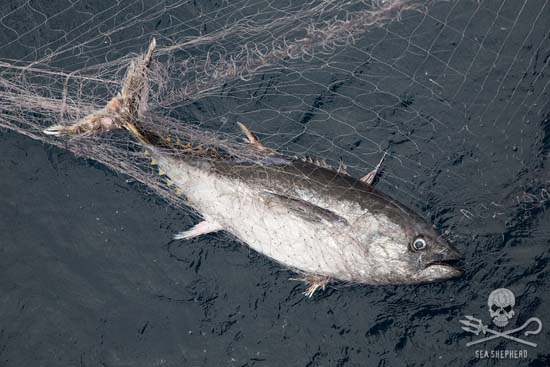 25 critically endangered Southern Bluefin tuna were found dead in one of the illegal driftnets of the Fu Yuan Yu fleet. Photo: Tim Watters 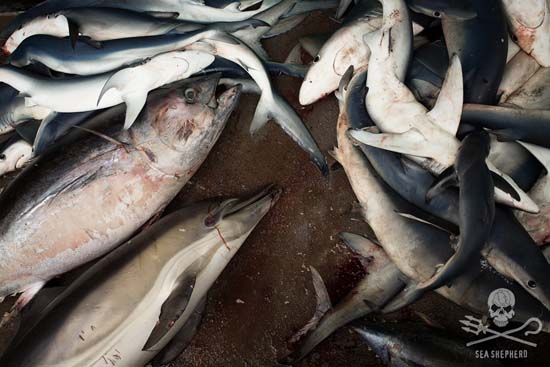 321 dead animals comprising of 12 different species were retrieved from one of the illegal driftnets of the Fu Yuan Yu fleet. Photo: Tim Watters