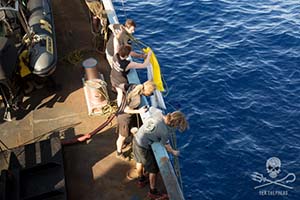 The crew of the Steve Irwin retrieves fishing sacks, discarded by the FU YUAN YU 076. Photo: Eliza MuirheadThe fishing vessel Fu Yuan Yu 076, one of six vessels documented fishing illegally in the Indian Ocean by Sea Shepherd, has crossed over to South China Sea from the high seas of the Indian Ocean, through the Malacca Straits. The vessel entered the Chinese Exclusive Economic Zone (EEZ) on March 22, 2016 at 0836 UTC, Southwest of Nansha Qundao (Spratly Island) bordering the Indonesian EEZ.

The Fu Yuan Yu 076 has switched off its Automatic Identification System (AIS). Sea Shepherd’s Flagship, the Steve Irwin, remains on the tail of the illegal vessel ensuring that its location is relayed to the relevant authorities across the world, including authorities in China.

The Steve Irwin intends to follow the Fu Yuan Yu 076 back to whichever port in China the vessel goes to, in order to prevent undetected flight and to ensure that the Chinese authorities are immediately aware of the vessel’s arrival and its activities en route.

Captain of the Steve Irwin, Siddharth Chakravarty said, “The role of my vessel is to ensure that everything that transpired between finding the vessel to the time the vessel enters port is documented. The Fu Yuan Yu 076 seems to be heading back to China and my intentions are to provide all the evidence I have against the Fu Yuan Yu fleet’s illegal fishing operations to the Chinese authorities to aid their investigations in prosecuting the owners and the captains of these vessels.”

On January 25, 2016, the Fu Yuan Yu fleet of vessels was found fishing in the high seas of the Indian Ocean using driftnets, a form of fishing banned by a United Nations Moratorium in 1992. The crew of the Steve Irwin documented the activities of the fleet, including confiscating a four-kilometre section of the net.

Extensive reports from the undercover operations were submitted to Interpol’s Project Scale, the Indian Ocean Tuna Commission (IOTC), the Commission for the Conservation of Southern Bluefin Tuna (CCSBT), and to officials in China.

When the Steve Irwin intercepted the Fu Yuan Yu 076 on March 13, 2016, the poaching vessel was already 2,000 nautical miles north of where it had been first documented in January 2016.

Captain Chakrvarty added, “The move to a different and faraway fishing ground can be attributed to the initial bust of the fishing fleet by Sea Shepherd, combined with a strong message from the Chinese authorities revoking the destructive operations of these vessels.”

However, shockingly, the Fu Yuan Yu 076 is now engaging in the destruction of its driftnet gear on board. This foul play is an obvious attempt to obstruct an imminent investigation by Chinese authorities. 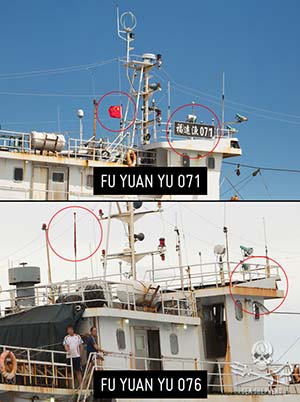 A comparative photo between the FU YUAN YU 071 and the FU YUAN YU 076 that indicate the vessel is attempting to hide her identity by taping down the Chinese flag and removing the identification name boards. Photo: Tim Watters 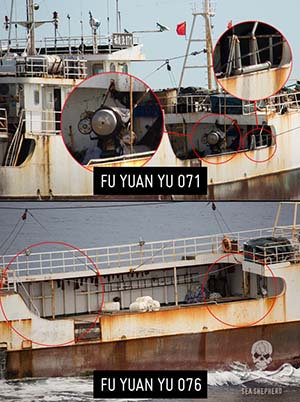 A comparative photo between the FU YUAN YU 071 and the FU YUAN YU 076 that shows the absence of the net-hauling winch and the net-transfer chute in an attempt to tamper with the evidence of her illegal fishing operations. Photo: Tim Watters

Sea Shepherd’s documentation of the vessel’s destruction of evidence indicates the likelihood that similar acts are being undertaken by the remaining vessels in the Fu Yuan Yu fleet, in order to destroy or conceal incriminating gear and implements.

“Using drones and small boats, we have found multiple instances on board the Fu Yuan Yu 076 that directly prove the destruction of evidence. The vessel has not only engaged in the active use of banned driftnets but is now also tampering with the evidence before she enters port. The fleet of vessels has violated at least 10 different international regulations and with this deliberate act, they have just added to that growing list. With all the evidence we have collected, I am confident that when the vessels are boarded on arrival, authorities in China will be able to prosecute them to the maximum extent”, said Captain Chakravarty. 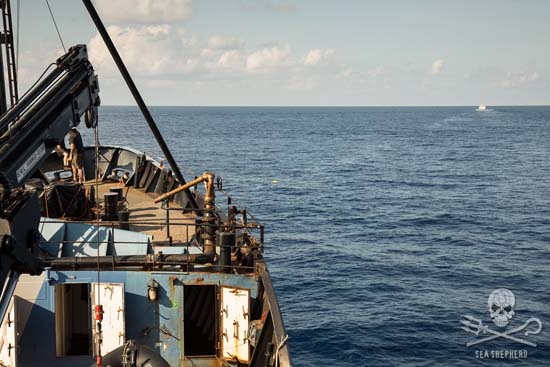 The FU YUAN YU 076 leaves a trail of fishing sacks used to store its catch in its wake. Photo: Eliza Muirhead 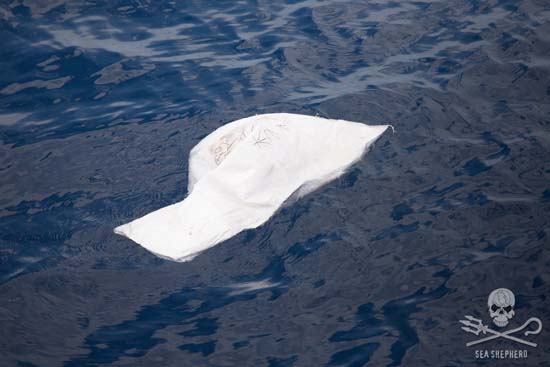 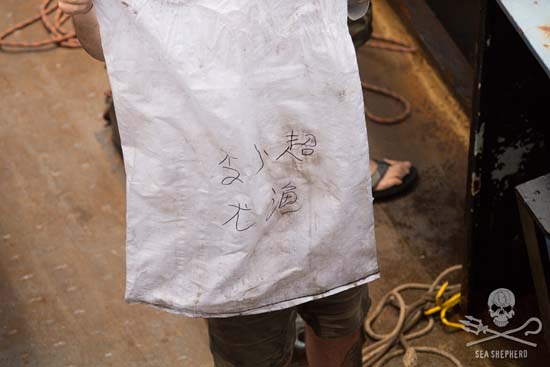 One of the discarded fishing sacks, retrieved by the Sea Shepherd crew. Photo: Tim Watters