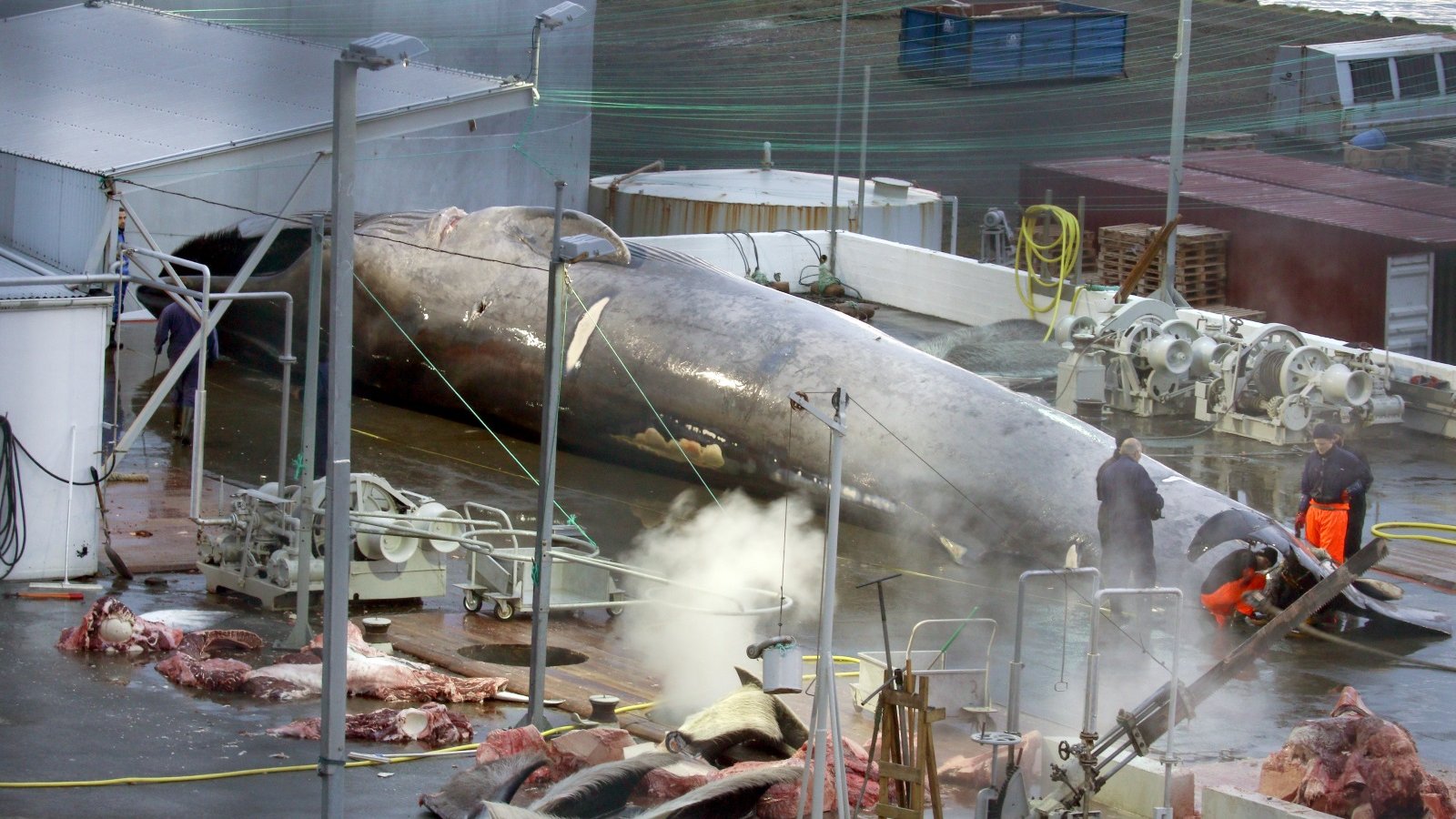 Sea Shepherd volunteers monitoring the Hvalur hf whaling station in Hvalfjordur Iceland have documented the slaughter of an endangered Blue whale on the night of July 7th, the 22nd endangered whale killed and butchered for export to Japan by Kristján Loftsson’s commercial whaling company since June 20th, 2018.

Although the first 21 whales killed were endangered Fin whales – which the Icelandic government has permitted Loftsson’s company to slaughter despite an international moratorium on whaling and the endangered status of the fin whale – they do not have a permit to kill endangered Blue whales.

No other nation – not even Japan nor Norway -- slaughters Fin whales, and there has not been a Blue whale harpooned by anyone for the last fourty years until this one harpooned by Hvalur 8.

Loftsson’s whaling station crew posed for photos next to and even on top of the whale in a sign they knew very well this was a rare Blue whale. Then Loftsson ordered his crew to butcher the whale just like it was another Fin whale – the meat, skin, blubber and bone all now mixed in with the Fin whales previously caught, which will make it difficult or impossible to locate during potential inspections by the authorities.

The International Whaling Commission (IWC) has outlawed all commercial whaling activities. Blue whales and Fin whales are protected by the Convention on International Trade in Endangered Species (CITES).

Photographs and video taken by the Sea Shepherd UK team on the ground near the whaling station make it possible to examine the species identifying indicators of skin colour/pattern, baleen colour, dorsal fin shape, and tail stock.  According to several scientific experts specializing in whale identification contacted by Sea Shepherd, the whale is without question a Blue whale.

Sea Shepherd Founder Captain Paul Watson is appealing to Icelandic authorities to stop these crimes against conservation by Kristján Loftsson. “This man must be stopped from ruthlessly violating international conservation law and bringing such disrepute to the nation of Iceland. There can be no legal justification for this crime.”

Captain Paul Watson has spent over a half a century defending whales. After viewing the photos and video taken by his team in Iceland, he said, “I have viewed plenty of Blue whales on the surface, dived with them beneath the surface in West Australia, off the coast of California, in the Southern Ocean and in the waters off Newfoundland. I know a Blue whale when I see one and this whale slaughtered by Kristján Loftsson is a Blue whale.”

Sea Shepherd UK’s Chief Operating officer Robert Read stated, “The crime committed against this iconic whale must be fully investigated by independent inspectors with DNA samples taken from all the whale meat and parts in storage at Loftsson’s whaling station and warehouses since the whale has been butchered and removed from view potentially to hide the evidence as Loftsson has no authority (even within Iceland) to kill a Blue whale. In addition, environmental DNA samples should be taken from whaling station equipment, surfaces and containers to look for Blue whale DNA in case the butchered parts have been removed to hide this latest atrocity.”

Sea Shepherd has had crew on the ground since the slaughter of Fin whales began on June 20th. Their aim is that every whale will be documented for the entire Fin whaling season.