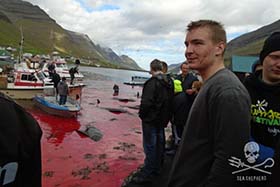 Bloody faces of the whalers following the slaughter. Photo: Julian PattersonSea Shepherd volunteers on the ground in the Faroe Islands have captured horrific scenes of the slaughter of a pod of pilot whales which took place at Hvannasund in the north of the island archipelago yesterday morning.

Two Sea Shepherd volunteers were able to film the infamous drive hunt from a distance outside of the one nautical mile exclusion limit surrounding the slaughter. Later, more volunteers captured shockingly graphic photographs of the aftermath of the slaughter.

Video footage of the slaughter, which is known by the Faroese term grindadráp or grind, shows one of the killers pulling a knife from his pocket, and using it to violently cut a number pilot whales.

Since May 2015, the primary killing method permitted in a grindadráp has been a spinal lance. The use of a knife is reportedly permitted only under special circumstances, though it is not clear what these circumstances are.

Land Team Leader, Rosie Kunneke, has expressed concern over the apparent lax approach to the regulation of the killing methods. “Faroese authorities have made it very clear that they expect Sea Shepherd - and everyone else visiting the Faroe Islands - to follow the very letter of their grind laws. However, it appears that the laws are considerably more relaxed when it comes to the whale hunters themselves. It is obvious that the Faroese authorities are intent on protecting the continuation of this depraved slaughter while paying only lip service to so-called ‘humane’ killing methods,” she said. 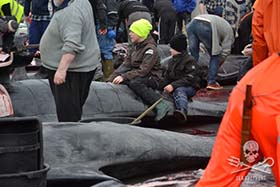 Children play on the carcasses of the slaughtered pilot whales. Photo: Nils GreskewitzThe pod of 22 pilot whales was spotted at approximately 0830 local time on Monday morning. The animals were then driven to Hvannasund in the north of the island archipelago, where the entire pod was eventually slaughtered.

Campaign Co-Leader, Ross McCall, who was also on the ground during the slaughter, has praised the efforts of his fellow Sea Shepherd crewmembers. “It has been a sad day in the Faroe Islands. With the new laws that have been put into place as a move to tie our hands, getting our teams to the beach where 22 pilot whales were being herded was a challenge. With quick thinking and communication, part of our land crew managed to capture the hunt on camera. I, myself, witnessed an excruciating sight. The whales being lifted by crane onto the decks of the dock, blood pouring from the wounds that caused their death. Such a shameful sight. But documenting these tragic events is now of upmost importance in order for us to show the world.”

The slaughter at Hvannasund is the second grindadráp of 2015. On Saturday June 6, 154 pilot whales were slaughtered on Miðvágur beach on the island of Vágar in the northwest of the Faroe Islands. The grind took place prior to the arrival of Sea Shepherd, and was the largest dolphin slaughter in the islands since 2013.

CEO of Sea Shepherd Global and Leader of Operation Sleppid Grindini, Captain Alex Cornelissen, said, “Today, we mourn the death of 22 pilot whales. But our teams remain focused and strong; determined to tell the story of the grindadráp to the world so that these deaths, and the deaths of all before them, will not be in vain.”

Sea Shepherd volunteers on the ground in the Faroe Islands have captured
horrific scenes of the slaughter of a pod of pilot whales which took place at Hvannasund
in the north of the island archipelago this morning.
Tweet