UPDATE - We have received new information this morning:

We will provide updates as they come through. 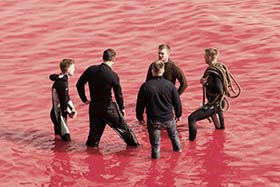 Whale hunters in a sea of red. Photo: Eliza MuirheadYesterday, approximately two hundred pilot whales were slaughtered on the killing beaches of the Danish Faroe Islands. The slaughters, known by the traditional Faroese term ‘grindadráp,’ took place over two separate drive hunts which ended at the Bøur and Tórshavn killing beaches, making this the single bloodiest day in the archipelago this year.

Three Sea Shepherd crewmembers from South Africa, Belgium and Luxembourg have been arrested and another two, from Italy and France, have been detained for standing in defense of the whales that were targeted for slaughter.

At approximately 1400 local time, a massive pod of around 150 pilot whales was spotted close to the Mykines in the west of the Faroe Islands archipelago. A flotilla of small boats drove the pod to Bøur. The awaiting crowds of killers then dragged the animals violently on to the killing beach.

Sea Shepherd Land Team Leader, Rosie Kunneke of South Africa, and Christophe Bondue of Belgium , also of the land team, were arrested at the Bøur slaughter. Police tackled the pair to the ground after they ran onto the beach, as the pod was being driven to the shore.

Kunneke was held facedown into the sand and rocks as crowds stormed the beach to get to the pilot whales. Sea Shepherd volunteers were able to capture graphic photographs and video footage of the arrests and the slaughter that followed.

CEO of Sea Shepherd Global, Captain Alex Cornelissen, has said, “Anyone who knows Rosie knows how passionately she cares for animals. Seeing Rosie and Christophe thrown to the ground today for defending these whales, and then dragged away as the carnage began, was an absolutely heart-wrenching sight.”

A further two crewmembers of the Sea Shepherd fast trimaran Brigitte Bardot, Marianna Baldo of Italy and Xavier Figarella of France, were also detained at Bøur. The pair was in the Brigitte Bardot’s tender at the time they were apprehended. Police have not yet confirmed if Baldo and Figarella will be facing charges.

Captain of the Brigitte Bardot, Wyanda Lublink, reports that the Danish Navy vessels HDMS Triton and HDMS Knud Rasmussen were both in the region at the time of the Bøur slaughter.

“It was perfectly clear to me that the Danish Navy was present at Bøur to guard the grindadráp, and that the slaughter would proceed with the full consent of the Danish Navy. How Denmark - an anti-whaling member nation of the European Union, subject to laws prohibiting the slaughter of cetaceans – can attempt to justify its collaboration in this slaughter is incomprehensible ” said Captain Lublink.

Then, at approximately 2230 local time, Faroese media announced the commencement of a second grindadráp at Nólsoyarfirði, west of the capital of Tórshavn. Reports indicate that approximately 50 pilot whales were herded from Nólsoy onto the killing beach at Tórshavn by 40 boats, and eventually slaughtered.

A legal representative has been brought-in to act on behalf of the arrested and detained Sea Shepherd volunteers.

The double-slaughter began during the court hearing for another two Sea Shepherd volunteers. Susan Larsen of the United States and Tom Strerath of Germany appeared in court yesterday following their arrest on Monday. During the proceedings, the prosecution informed the court that the pair has been charged with breaching the Faroese Pilot Whaling Act.

Larsen has been granted permission to return to the United States until the next court date.

Captain Cornelissen has stated, “I am incredibly proud of the brave efforts of the Sea Shepherd crews today. In the face of adversity, they stood strong, for the whales and for the oceans.”