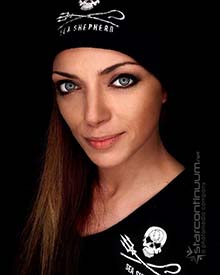 It is the second consecutive year that Menden will stand alongside Sea Shepherd’s international crew in defense of the pilot whales who are targeted for slaughter in the infamous drive hunt, known as the grindadráp or grind.

“When I heard that there would be another land team on the Faroe Islands this year, it was clear to me that I want to join the campaign again. What is happening there is a crime against nature. We humans tend to think that we are above all, but in fact we are not. We are part of an ecosystem and should respect the planet and its inhabitants instead of killing and destroying everything. The campaign Operation Sleppid Grindini is very close to my heart. My time with Sea Shepherd started last year on the Faroe Islands and I will do whatever I can to stop the senseless slaughter of pilot whales taking place there. My time with Sea Shepherd will not end until the oceans are safe for their inhabitants. I am very proud to be part of this movement and that I am able to fight for the oceans side by side with so many extraordinary people,” said Menden.

This year alone 490 pilot whales have been slaughtered in the Faroe Islands. A total of 14 Sea Shepherd volunteers, representing Germany, the United Kingdom, Italy, Corsica/France, the Netherlands, Belgium, Luxembourg, South Africa, Canada and the United States have been arrested for standing in defense of the whales.

Tom Strerath of Bremen and Tobias Boehm of Frankfurt are among the 14 who have been arrested.

Strerath was apprehended on July 20 at an attempted grindadráp near Klaksvík. On August 20, one month after his arrest, charges against Strerath were dropped due to a lack of evidence. His passport was returned by Faroese authorities, who had confiscated it upon his arrest, and Strerath was finally able to return to Germany.

Boehm was arrested on August 12 at Sandavágur, and appeared in court last Friday to face charges for breaking the Faroese Pilot Whaling Act. The verdict is expected to be handed-down on Wednesday September 2.

Director of Sea Shepherd Germany, Anne Kämmerling, said, “This year has been the first time ever that three Sea Shepherd ships spent the weeks of preparation leading up to campaign in Bremen. Germany has become a stronghold for Sea Shepherd and we have experienced massive support, which is growing by the day. We are incredibly proud of our German volunteers who are standing up for the pilot whales and are delighted to have Anne join our crew again in 2015.”

As Sea Shepherd continues its defense of the pilot whales, international pressure against the grindadráp continues to mount from countries within the European Union.

In early August, two major German cruise-liner companies, AIDA and Hapag-Lloyd, announced that they have cancelled tours to the Faroe Islands in response to the on-going slaughters.

In the past month, political representatives from Luxembourg, Italy and the United Kingdom have all publically expressed their distain for the on-going practice of the grindadráp, which Denmark actively supports in defiance of the sentiments of their EU obligations.

On August 18, the Scottish town of Wick announced that it had severed its 20 year long twin-town relationship with the city of Klaksvík, and would not look to re-instate official relationships until the "disgusting" slaughter of whales in the archipelago is banned.

“The EU has woken up to Denmark’s shame. The wheels are in motion and they’re clearly turning against the Danish government’s on-going support of the grindadráp,” said Captain Alex Cornelissen, CEO of Sea Shepherd Global. 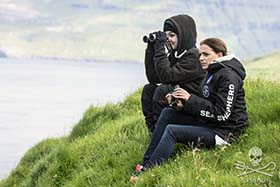 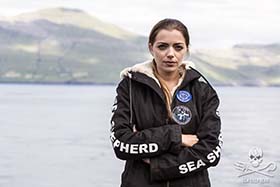