Our Social Media Coordinator Lex Rigby monitors and moderates comments on Sea Shepherd Global’s Facebook, Twitter, Instagram and YouTube accounts. Since we’ve found the same questions get asked over and over, we thought it was time to address these in a more comprehensive way.

1) What happened to Whale Wars and will there be another season?

Following the 2014 International Court of Justice (ICJ) ruling against Japanese whaling in Antarctica their fleet took a one year hiatus from operations, which allowed us to launch Operation Icefish in late 2014. 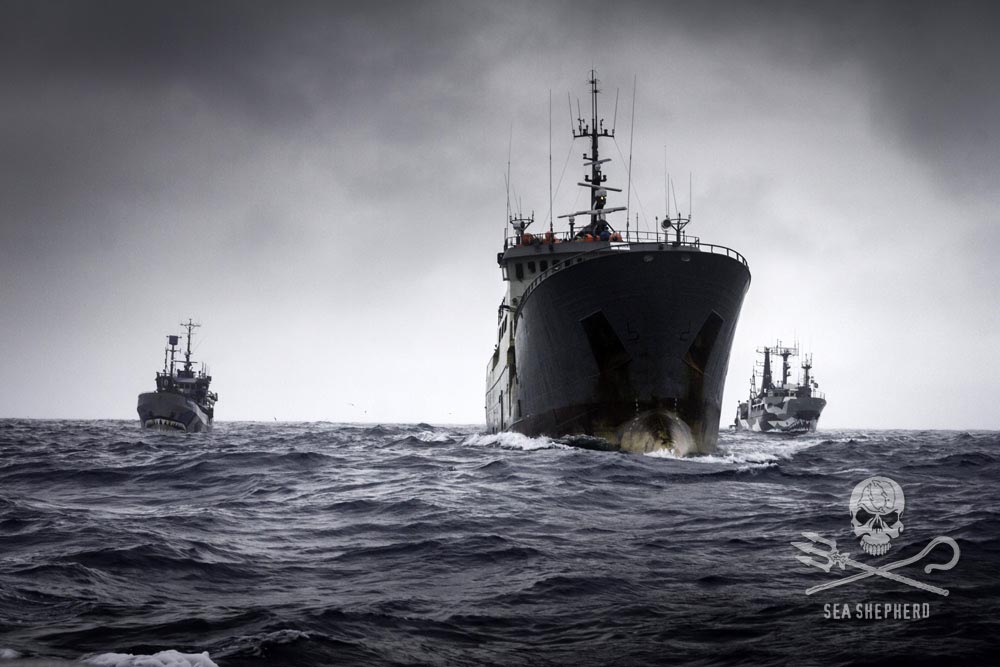 Operation Icefish was the first campaign of its kind targeting a band of six illegal fishing vessels in the Southern Ocean, otherwise known as the Bandit Six. Sea Shepherd's epic 110 pursuit of the poaching vessel Thunder ended when the captain ordered the scuttling of the ship off the coast of São Tomé in central West Africa to hide evidence from authorities. The chase and the arduous hauling operation to retrieve 72km of abandoned fishing gear were featured in Animal Planet's recent series, Ocean Warriors.

After the Japanese whaling fleet resumed operations during the 2015/2016 season and slaughtered 333 minke whales (230 of which were pregnant females) a decision was made by Sea Shepherd Global's Board of Directors to return to the Southern Ocean for the 2016/2017 season with our newest patrol vessel, the Ocean Warrior. This campaign, Operation Nemesis, is currently underway. 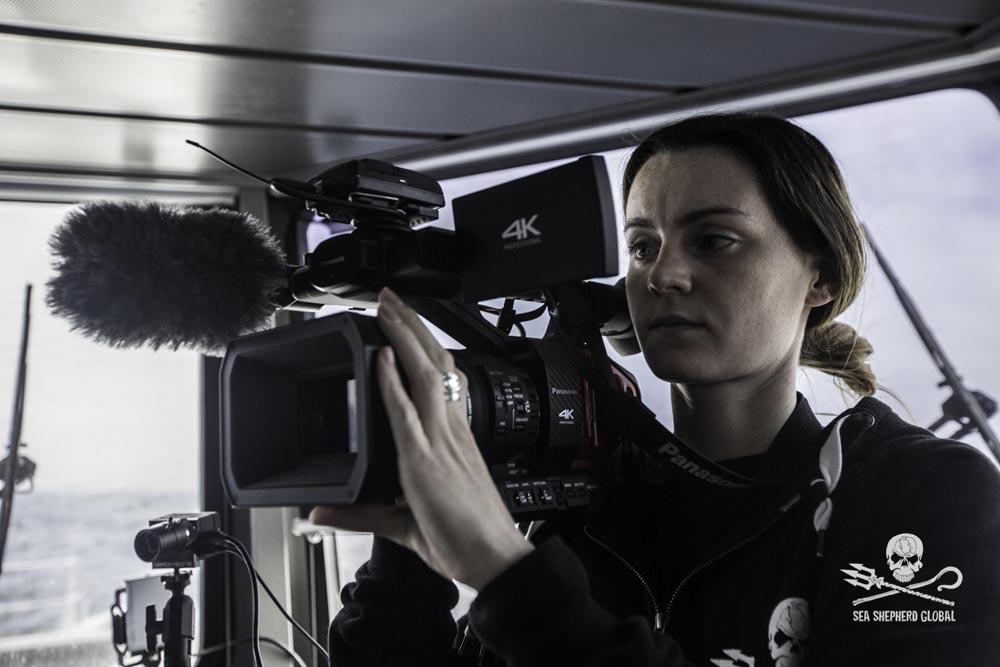 Oceaen Warrior producer/videographer Ashley shoot on the OW bridge. Photo: Sea Shepherd Global / Simon AgerOnce again, Animal Planet’s film crew is on board both the Ocean Warrior and our flagship the Steve Irwin capturing every aspect of the current campaign. Although we get a lot of questions from supporters asking us when the next season of Whale Wars will air, that’s entirely in the hands of Animal Planet once the campaign has concluded.

In the meantime, Sea Shepherd Global will continue its mission to defend, conserve and protect marine wildlife and end the destruction of habitat. Find the latest campaign news and updates posted regularly on our website, Facebook, Twitter and Instagram pages.

2) I thought only Japan’s JARPA-II was deemed to be illegal, what about NEWREP-A? 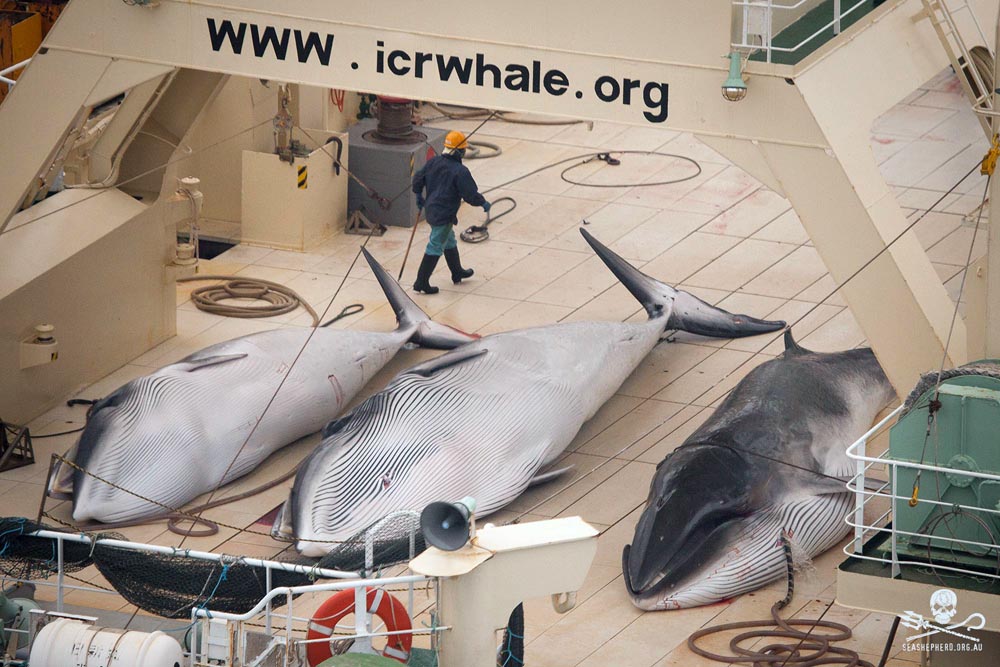 Dead minke whales on the Nisshin Maru, 2014. Photo: Sea Shepherd Global/Tim WattersWhaling has been illegal under the International Whaling Commission's moratorium on commercial whaling since 1986. However the Japanese whaling fleet exploits a loophole that allows for 'scientific' whaling. In 2014 the International Court of Justice (ICJ) ruled that the whaling fleet's poorly designed 'research' program called 'JARPA-II' was 'not for scientific purposes'.

The whaling fleet countered the suspension of 'JARPA-II' with 'NEWREP-A', a new poorly designed 'research' program to replace it. Given very little has changed other than a reduction in quota and an increase in whaling grounds, it is likely that the ICJ would once again rule against the scientific basis of the program.  However, following the 2014 verdict, Japan simply decided the ICJ had no jurisdiction in “any dispute arising out of, concerning, or relating to research on, or conservation, management or exploitation of, living resources of the sea”.

3) How many whales are being targeted by Japanese whale poachers?

The Japanese whaling fleet's new research program 'NEWREP-A' targets 333 minke whales. Thanks to Sea Shepherd's Southern Ocean whale defense campaigns over the past 12 years this self-appointed quota has been significantly reduced from the former target of 1035 (935 minke whales, 50 humpback whales and 50 fin whales).

We remain steadfast in our defense of whales in the Southern Ocean. There is nothing scientific about the slaughter of 333 protected minke whales to determine if populations could sustain a return to commercial whaling as per the 1950s and 60s when other whale populations were hunted to near-extinction. 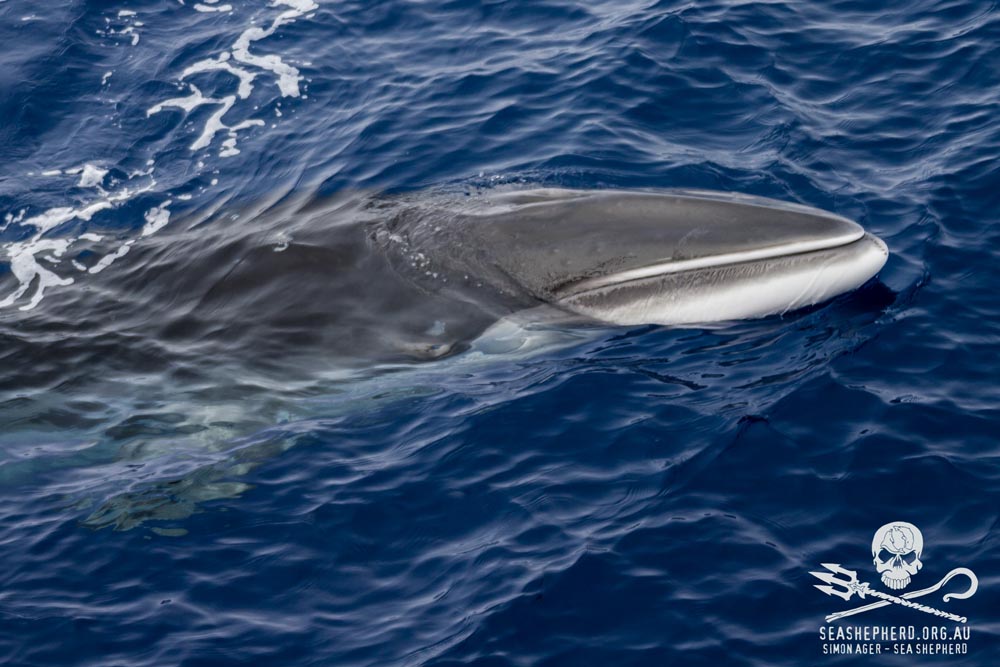 Minke whale surfaces near Bob Barker. Photo: Sea Shepherd Global / Simon AgerNot yet! Minke whales are not considered endangered but are threatened because their numbers are hard to calculate. The overexploitation of other whale species by the whaling industry led to a serious decline in numbers, resulting in some reaching the brink of extinction. Although their populations are steadily rising some species like the fin and sei whales remain on the IUCN Red List of endangered species.

The estimated abundance of minke whales between the multi-year circumpolar surveys conducted between 1982/83 – 1988/89 and 1991/92 – 2003/04 show an appreciable decline but it is yet to be determined whether that decline is due to a reduction in abundance or changes in the survey method.

5) How long is the whaling season?

The whaling season generally lasts for about three months during the Austral summer; from early December to late February or early March.

6) Where is Captain Paul Watson and why does he not participate in the whale defense campaigns anymore?

Sea Shepherd's whale defense campaigns have been so effective at preventing Japanese whale poachers from reaching their self-allocated quota each season, and thus affecting their profits that in 2012 the whalers sought an injunction against the US organization Sea Shepherd Conservation Society and Captain Paul Watson personally – through the US courts. The injunction stipulates that Sea Shepherd USA and Captain Paul Watson must keep a distance of 500 yards from any whaling operation.

Obviously this injunction does not apply to other independent entities like Sea Shepherd Australia or Sea Shepherd Global.

7) How did the Steve Irwin lose the Nisshin Maru after finding them on Jan-15th and why did the Ocean Warrior not go to assist them? 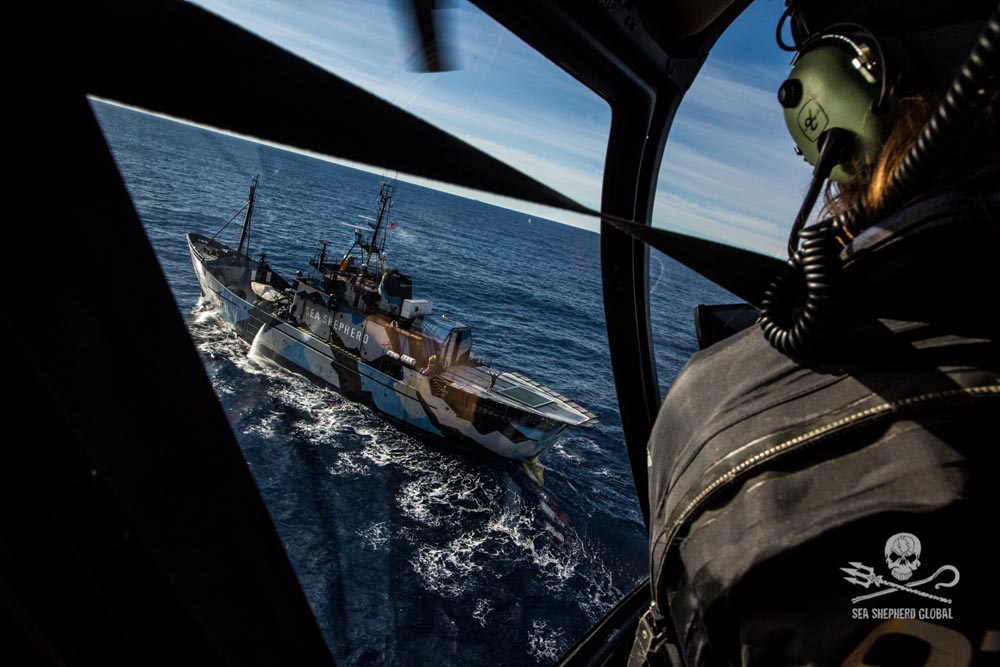 In disrupting their hunt that day Sea Shepherd saved the lives of many whales and in chasing the whale killing fleet over 300 nautical miles north of their hunting grounds more whales were spared their harpoons in the following days. Read more about the discovery of the Nisshin Maru here.

The Ocean Warrior was searching in the whaling fleet's eastern most hunting grounds when the crew received the call that the Steve Irwin's helicopter had found the Nisshin Maru. From a tactical and logistical perspective, the decision was made to make a quick resupply stop in Hobart before rejoining the Steve Irwin to continue the fight against illegal whaling in the Antarctic. This resupply enables the Ocean Warrior to extend their range and remain at sea until the end of the whaling season and continue to keep the whaling fleet on the run. 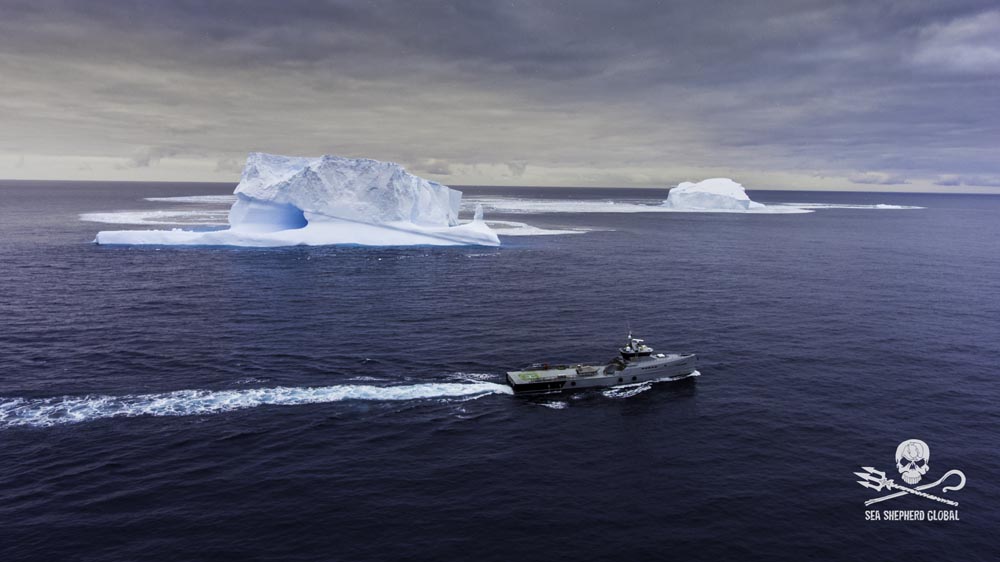 8) But doesn't the Ocean Warrior already have the range to remain at sea for the duration of the whaling season?

The Ocean Warrior was specifically designed to carry a large amount of fuel, so in certain conditions it would have the range to remain at sea for the duration of the whaling season, providing the ship maintained a slow speed or used the more fuel efficient e-drive.

But the faster the vessel goes the quicker it burns fuel. Sometimes speed is the priority and sometimes range is the priority. We have to make a lot of judgment calls on when one takes priority over the other. Read Captain Meyerson’s commentary. 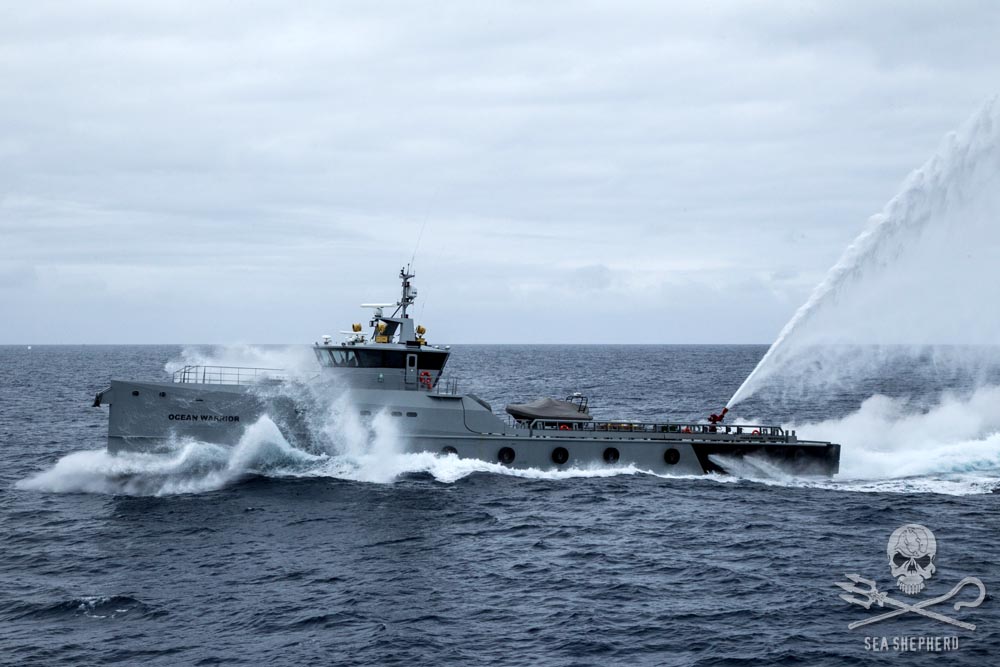 9) Why only have two vessels in the Sea Shepherd Global fleet tackling whaling in the Southern Ocean? Where are the Bob Barker, Sam Simon and Brigitte Bardot as well?

It costs an average 8,000 EUR per day to keep the Ocean Warrior and the Steve Irwin at sea. Southern Ocean campaigns are expensive, which is one of the reasons why the Australian government does not prioritize sending a customs vessel to patrol. 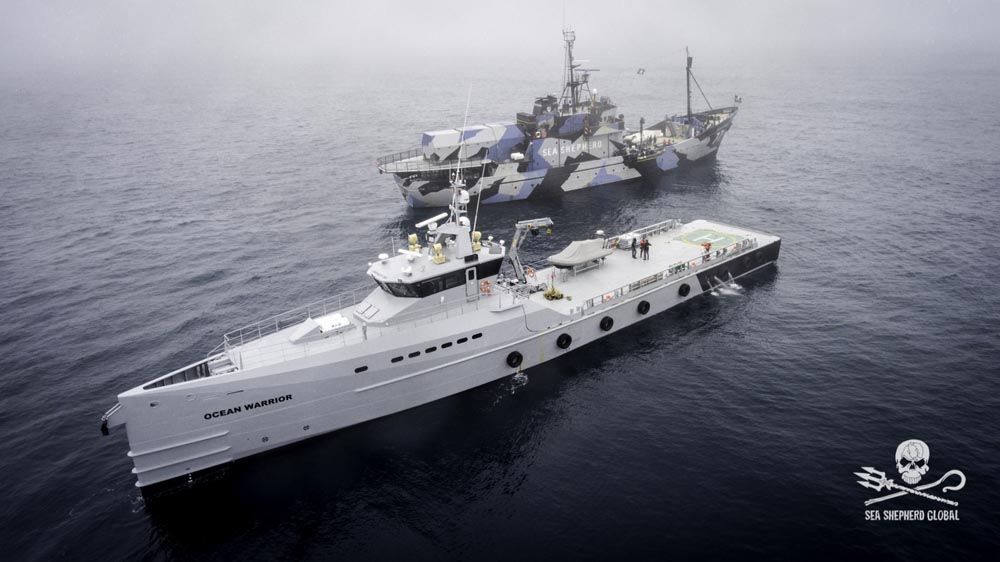 Ocean Warrior receives supplies from Steve Irwin during short rendezvous. Photo: Sea Shepherd Global / Simon AgerOur international reputation for defending the oceans often gives people the impression that Sea Shepherd is a large organization with lots of funding, but nothing could be further from the truth. We have a handful of staff coordinating an army of passionate volunteers around the world and without your financial support we simply cannot meet the considerable expense of a Southern Ocean campaign. This year our limited funding meant we were only financially able to send two ships.

Having spent five months patrolling the Gulf of Guinea for illegal, unreported and unregulated (IUU) fishing for Operation Albacore under the direction of the government of Gabon in central West Africa, the Bob Barker has been docked in Las Palmas de Gran Canaria undergoing maintenance. Since it needed two major generator overhauls, the ship was not able to join the Ocean Warrior and Steve Irwin in the Southern Ocean and still be ready for our 2017 campaigns back in central West Africa. 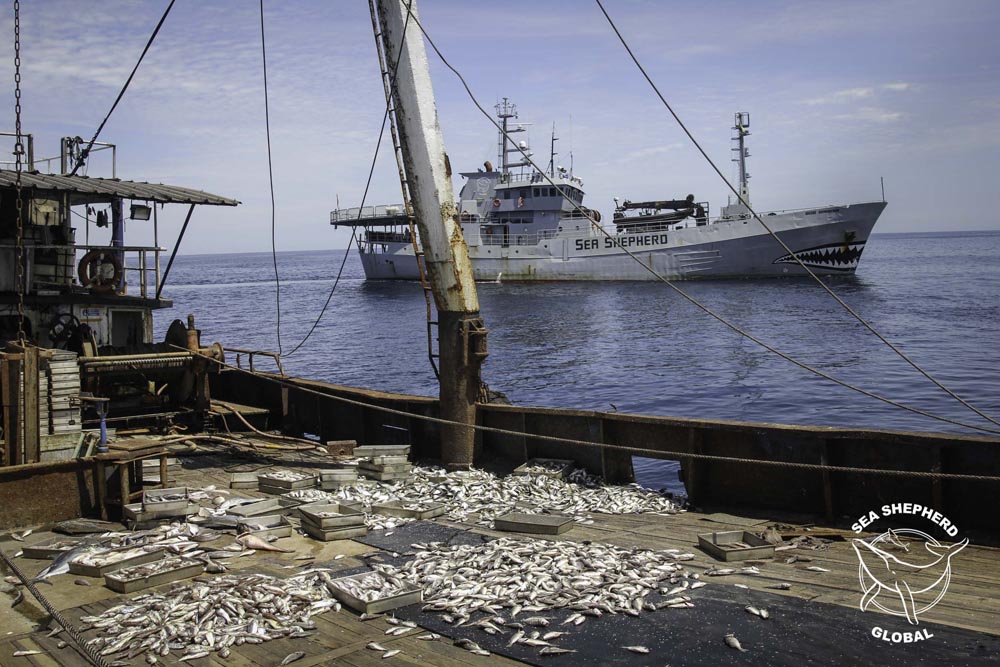 Bob Barker confronting IUU fishing on Operation Albacore. Photo Sea Shepherd Global / Alejandra GimenoOf the global catch of fish 15-40% is caught illegally and in working with governments like Gabon Sea Shepherd has an opportunity to make a real difference for the future of our oceans. More details on the Bob Barker's upcoming campaigns will be announced shortly.

Like the Bob Barker, the Brigitte Bardot recently spent many months at sea working with Sea Shepherd France to retrieve ghost nets in the Mediterranean on Operation Mare Nostrum and Sea Shepherd Italia for Operation Siracusa to deter poaching of dusky groupers in the Plemmirio Marine Protected Area around Sicily. The vessel is currently docked in Italy undergoing maintenance.

The Sam Simon is currently working with the Sea Shepherd Conservation Society (Sea Shepherd USA) helping to protect the critically endangered vaquita porpoise n the Sea of Cortez for Operation Milagro III. Read here for more information about this campaign.

10) What can I do to support Sea Shepherd Global and help defend, conserve and protect whales in the Southern Ocean?

Spreading the message is also extremely important so please continue to share our posts, talk to your friends and family or better yet GET INVOLVED with our network of on-shore Shepherds: seashepherdglobal.org.