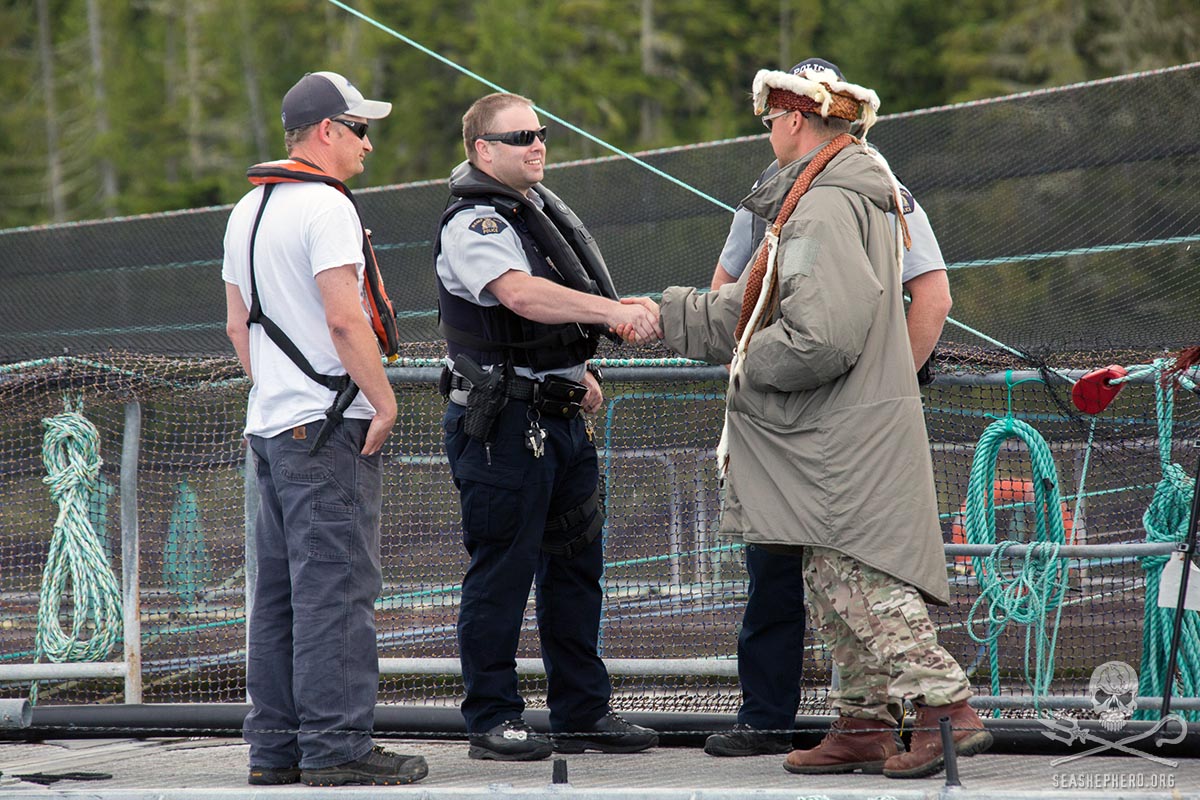 Ernest shakes hands with RCMP he knows them and teaches their kidsHereditary Chief Ernest Alexander Alfred, along with a group of First Nations people, have peacefully occupied the Marine Harvest salmon farm, Swanson Island.

They state they will remain on the farm until their Chiefs are satisfied that the Province of British Columbia has cancelled that farm’s Licence of Occupation and forcing it to leave their territory. The farm is located 17km east of Alert Bay.

On April 23, 2017, Ernest Alfred and other Hereditary Chiefs invited all political candidates to the Namgis Big House in Alert Bay to state their position on removing salmon farms to protect wild fish. Both the Green Party and the NDP candidates stated they would work to remove salmon farms from the territories of First Nations who do not want salmon farms operating in their waters.

“… we will remove fish farms, we are committed to that… and will make sure these territories are clear of fish farms.[i]”  (Minister Claire Trevena in Namgis Gukwdzi (Big House)).

“I am a grandson of the Namgis, Lawit’sis and Mamalilikala Nations, this farm is in my house,” states Ernest Alfred. “Over the past week, I boarded salmon farms and shot underwater footage in the pens. The sheer amount of disease and wild herring in the pens is out of control! We have no food fish again this year, our wild salmon runs are collapsing and the salmon farming industry is a herring fishery that no one knew about!  Enough! To Marine Harvest: call in your transport vessels and get these Atlantic salmon out of my territory.”

The group aboard the farm are committed to peaceful action, there will be no damage done to the farm. The Sea Shepherd Conservation Society research vessel, the Martin Sheen is on site to provide support.

The R/V Martin Sheen is currently in the area for its wild salmon defense campaign, Operation Virus Hunter II, assisting independent biologist Alexandra Morton in protecting the British Columbia coast from the devastating impact of salmon farms on wild fish. The non-profit organization has ships around the world dedicated to defending, conserving and protecting marine life.  This is the second year the crew of the R/V Martin Sheen are in Canada’s west coast waters to protect wild salmon.

Chief Ernest Alexander Alfred states he stands in solidarity with his neighbours in Kingcome Inlet, whose territory covers the Broughton Archipelago. The Musgamagw Dzawada’enuxw have said "NO!" to salmon farms for over 30 years, served the industry with multiple eviction notices and were sued by Marine Harvest for boarding a nearby farm last August.  Marine Harvest dropped all charges against them when three hereditary leaders filed an affidavit contesting Marine Harvest’s right to be in their territory

“I am not moving until my chiefs are satisfied that this salmon farm Licence of Occupation has been cancelled,” Says Alfred, “I am fighting for my life”