Concurrently, Fraser River First Nations are holding a rally at noon in the city of Vancouver outside the Department of Fisheries and Oceans offices. The rally is in support of the Musgamagw Dzawada’enuxw action at the salmon farm to reclaim their territory from outside businesses profiting off their waters without permission and affecting their most important food resource.

Sea Shepherd Conservation Society’s research vessel, the R/V Martin Sheen, is standing by on scene in the Archipelago to provide support to the indigenous people occupying the Burdwood Atlantic Salmon Farm.

The R/V Martin Sheen is currently in the area for its wild salmon defense campaign, Operation Virus Hunter II, assisting independent biologist Alexandra Morton in protecting the British Columbia coast from the devastating impact of salmon farms on wild fish. The non-profit organization has ships around the world dedicated to defending, conserving and protecting marine life.  This is the second year the crew of the R/V Martin Sheen are in Canada’s west coast waters with Morton.

The action by the Musgamagw Dzawada’enuxw comes after 30 years of this First Nation telling the provincial and federal governments that they do not want salmon farms in their territory.

Salmon farms were first sited in Musgamagw Dzawada’enuxw territory in 1987. Today one third of the B.C. salmon farming industry is using their waters to grow millions of Atlantic salmon.  The companies operating in this territory, Marine Harvest and Cermaq are Norwegian-run. Cermaq is currently owned by Mitsubishi.

Morton’s research in Musgamagw Dzawada’enuxw territory shows that sea lice from salmon farms have lethally infected juvenile wild salmon at the Burdwood and the other sites for most of the past 17 years. 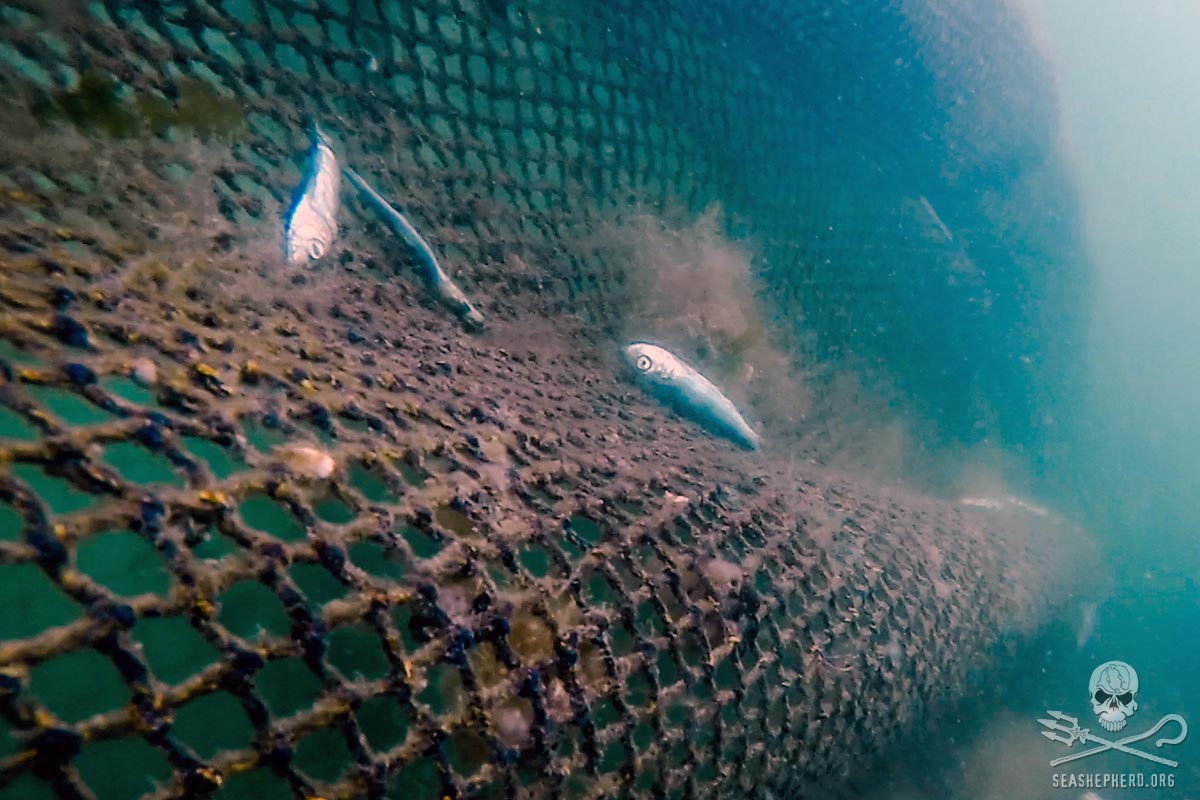 For the past three weeks Laichwiltach Nation hereditary chief George Quocksister Jr. has been travelling aboard the R/V Martin Sheen and filming inside every salmon farm in the region. His unprecedented footage reveals a proliferation of disease symptoms among the Atlantic salmon crowded into the pens.  The concern is that the high levels of pathogens released from these sites are harming wild fish.

Quocksister’s footage also caught hundreds of thousands of endangered local herring trapped in the pens, revealing that the salmon farming industry is acting like a commercial herring fishery. This sheds new light on the collapse of this herring stock, which is essential to the survival of such species as whales, birds and salmon.

“How can government talk and say they will do reconciliation with our nations if they are allowing the destruction of our resources in the water and in our land,” said Moon.

“I am grateful to hereditary leader and elected chief counselor Willie Moon, and the Musgamagwa Dzawada’enuxw for their brave action to save wild salmon and herring,” said Morton. “I hope that the NDP honor their words in the Big House in Alert Bay, and, in their words, ‘make sure these territories are clear of fish farms’  by refusing to renew the salmon farm Licences of Occupation that will expire next year in the Broughton Archipelago.  The licenses clearly state that government can revoke them if the activity on the tenures is not in the ‘public interest.’”

The Musgamagwa Dzawada’enuxw are the only nation on the coast with salmon farms who have refused to sign any agreements with the salmon farming corporations and thus receive no money from the industry.  Both their hereditary and elected leadership are aligned in calling for the end of salmon farming in this territory so as to restore wild salmon and herring.