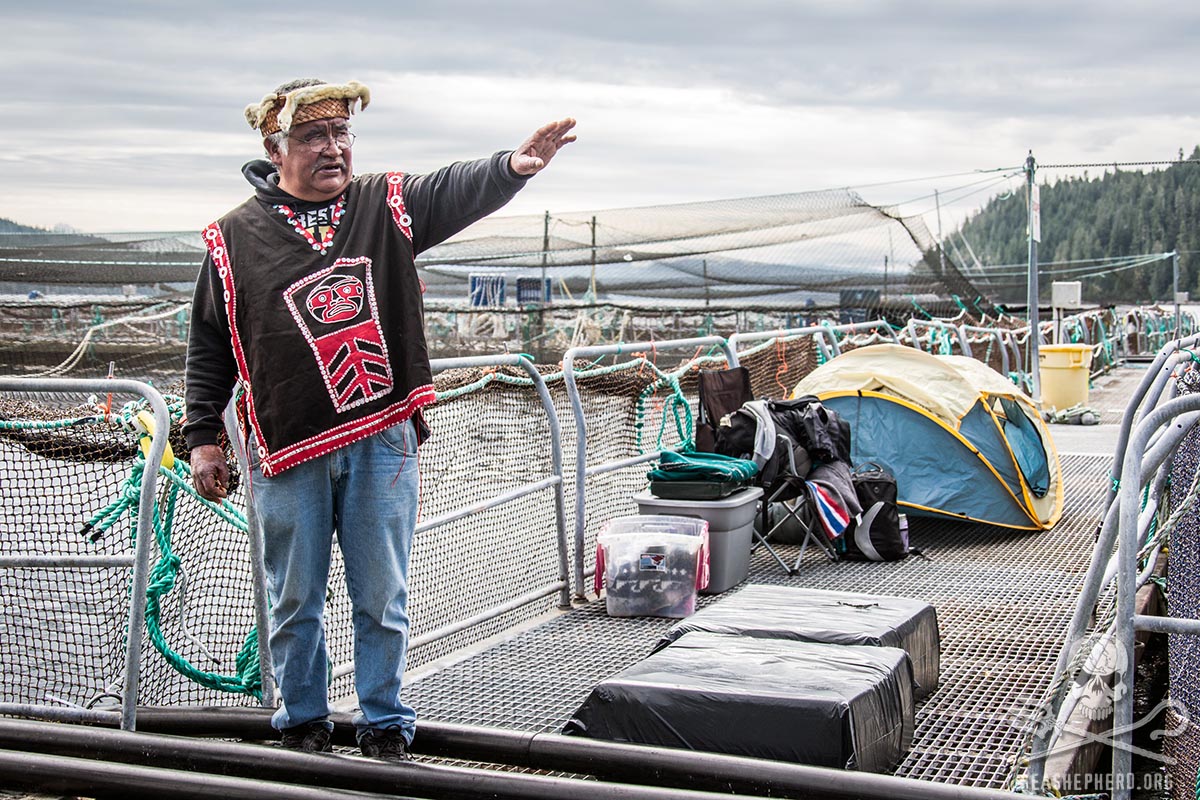 On August 24th, hereditary Chief Ernest Alfred led a group of Namgis and Mamalilikala First Nations as they occupied the Marine Harvest-owned Swanson salmon farm. Today is the eighth day of the occupation.

These First Nations state they will remain on the farms until their Chiefs are satisfied that the Province of British Columbia has cancelled the Licences of Occupation for the salmon farms in their territory.

Sea Shepherd Conservation Society’s research vessel, the R/V Martin Sheen, is on scene in the archipelago providing support to the indigenous people occupying the farms. The Sheen is currently in the British Columbia waters for its wild salmon defense campaign, Operation Virus Hunter II, assisting independent biologist Alexandra Morton in protecting the British Columbia coast from salmon farms for the second year in a row.

Many of these escaped salmon have now made their way up north are now being caught by the First Nations in Canada (source: https://beta.theglobeandmail.com/news/british-columbia/atlantic-salmon-caught-in-bc-waters-far-north-of-damaged-us-fish-farm/article36126206/?ref=http://www.theglobeandmail.com&) so that they do not become an invasive species, or introduce diseases that will contribute to the decline of the already dwindling salmon populations in the Pacific Northwest.

After the live salmon spill by Cooke Aquaculture, the governor of Washington state took action and halted the expansion of this industry in Washington State. Canadian First Nations that claim that the salmon farming industry is trespassing on unceded territory are calling for the government to remove the industry from their waters.

Trudeau also stated that he would respect the rights and jurisdiction of First Nations during the same speech.

“This is unceded territory; we have never given it away,” said Moon. “The government needs to listen to us now, because we are not going away. We have called on the government many times, to come and discuss how are we going to remove these fish farms from our territory. How can they talk about reconciliation when they are still doing damages to our resources and way of life? We will continue to fight until the salmon farms are gone.”