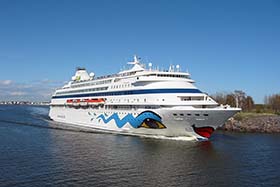 AIDA has decided to re-route its cruises, and will now stop in the Harbor of Kirkvall on the Scottish Orkney islands as an alternative to the Faroe Islands port of Klaksvík. (source: Wikimedia Commons)In a devastating blow to the tourism industry, two major German cruise-liner companies, AIDA and Hapag-Lloyd, have announced that they have cancelled tours to the Faroe Islands. The cancellations are a response to the continued drive hunt and slaughter of pilot whales in the island archipelago, known as the grindadráp.

The announcements come in the wake last week’s convictions of Netherlands-based charity, Sea Shepherd Global, and five Sea Shepherd volunteers, who were accused of interfering in the slaughter of over 250 pilot whales on the killing beaches of Bøur and Tórshavn on July 23.

Sea Shepherd received confirmation of the cancellations from AIDA and Hapag-Lloyd on Friday.

Director for Environment and Community and Chief Sustainability Officer for AIDA, Dr. Monika Griefahn, stated that the company has decided to re-route its cruises, and will now stop in the Harbor of Kirkvall on the Scottish Orkney islands as an alternative to the Faroe Islands port of Klaksvík. In a letter addressed to Sea Shepherd, Dr. Griefahn stated, “In the interest of our crew and our guests as well as for reasons for species protection AIDA Cruises has decided to stop making port calls to the Faroe Islands until further notice.” 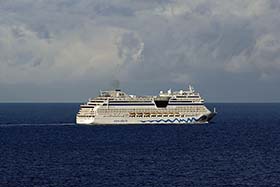 AIDA Cruises has decided to stop making port calls to the Faroe Islands until further notice. (source: Wikimedia Commons)In 2013, AIDA addressed a public letter to the Prime Minister of the Faroe Islands, Kaj Leo Johannesen, highlighting the company’s concerns with the grindadráp. In 2014, Hapag-Lloyd addressed a similar letter to Johannesen, stating, “We protect what fascinates us – that is why our company and our guests have a strong wish to stop the whaling in the Faroe Islands and to create a dialogue with you.”

On July 15 this year, Sea Shepherd contacted AIDA and Hapag-Lloyd regarding their objection letters, calling on both companies to immediately postpone cruises to the Faroe Islands in the face of the on-going slaughters.

Sea Shepherd also highlighted the change in the Faroe Islands Pilot Whaling Act and the potential implications these changes would have on AIDA and Hapag-Lloyd customers travelling to the archipelago. Specifically, Sea Shepherd notified both companies that, “any person who does not immediately report a sighting of whales to the district administrator (the sysselmand) is in breach of the law.”

Local media reports indicate that the international outcry against the grindadráp, which has intensified as a result of the July 23 slaughters and the arrest of the Sea Shepherd volunteers, has already resulted in a loss of at least 6,000 tourists to the archipelago.

CEO of Sea Shepherd Global, Captain Alex Cornelissen, said, “While our crewmembers have been found guilty of defending pilot whales, the fight against the continued slaughter of cetaceans in the Faroe Islands is rapidly gaining momentum. I congratulate AIDA and Hapag-Lloyd for standing-up against this cruel and unnecessary slaughter, and for sending a clear message to Denmark and the Faroe Islands that the world will no longer tolerate this bloody ‘tradition’.”