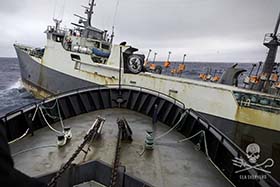 The incident comes almost two days after the illegal gillnet was deployed under the cover of darkness by the poachers, at 38˚ 28' south, 046˚ 47' east, on the Melville Bank.

Aware that the poachers were likely to attempt retrieval operations, Captain of the Bob Barker, Peter Hammarstedt, positioned his ship between the Thunder and the fishing buoys, thereby obstructing any attempt made by the Thunder to retrieve the illegal fishing gear.

Seeing the Thunder approach, Captain Hammarstedt sounded a multiple warning blasts on his ship's horn. The Thunder ignored the warning signals and proceeded on a hazardous course, crossing the bow of the Bob Barker.

In order to prevent the risk to life of the poaching crew, who were dangerously lined-up along the deck of the Thunder at the time of the incident, Captain Hammarstedt put his ship's engines astern to avoid collision. The Thunder passed within a mere 0.5 meters of the bow of the Bob Barker.

“I am lucky to have my bow intact. Were it up to the captain of the Thunder, my ship would have sustained considerable damage, enough to jeopardise continued chase. It was an extremely risky manoeuvre, made even more dangerous by poor weather conditions and fading light. All of this is a clear sign that the captain of Thunder, frustrated by the loss of profit he has incurred at the hands of our successful high seas pursuit, is at breaking point,” said Captain Hammarstedt.

The blocking operations lasted for over one hour before the crew of the Thunder was finally able to attach a grappling hook to the illegally-set gillnet and retrieve it from the water.

Photographic evidence taken by the Bob Barker shows illegally caught fish being hauled on to the Thunder. Many sharks that were also caught in the nets were thrown overboard, back into the sea. 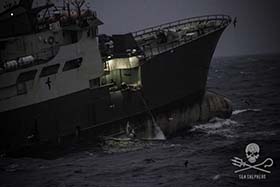 A shark is retrieved in deteriorating weather and poor light, only to be discarded. Photo: Simon AgerCaptain Hammarstedt said, “Generally, these crews would rely on bycatch from their illegal hauls to supplement their food supply. The fact that the crew of the Thunder is throwing sharks back into the sea indicates that this particular catch is intended for food, as opposed to profit, and is just one more sign that the poachers are getting desperate after our sustained pursuit.”

Captain Hammarstedt is now preparing to block any further attempts by the Thunder to re-engage in illegal fishing activity. “With weather conditions improving, my crew is currently preparing to launch full-scale defensive action against the Thunder, should they resume their poaching operations. Our smalls boats are at the ready and will engage the criminal vessel.”

The near collision comes 51 days into a high seas pursuit, during which time the Bob Barker has successfully disabled the illegal operations of the Nigerian-flagged Thunder, rendering it unable to poach toothfish. Based on current market value, it is likely that Sea Shepherd has cost the Thunder upwards of US $15 million in lost revenue as a result of the pursuit.

On Monday, the Sam Simon intercepted another two Interpol-wanted poaching vessels, the Kunlun and the Yongding, inside the Australian Antarctic Territory, in the Southern Ocean. The Sam Simon is currently in pursuit of the Kunlun.

The crew of the Thunder can be seen dangerously lined-up along the deck of the poaching vessel as Capt. Hammarstedt puts the Bob Barker's engines astern to avoid collision. The Bob Baker avoids a collision, the Thunder passing within a mere 0.5 metres of its bow. Photo: Simon Ager (click to enlarge)