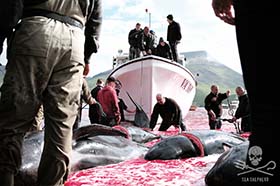 The slaughter of cetaceans is outlawed throughout the EU, including Denmark, in accordance with Appendix II of the Bern Convention. Photo: Mayk WendtSea Shepherd Land Team Leader, Rosie Kunneke of South Africa, and fellow crewmembers Christophe Bondue of Belgium, Xavier Figarella of Corsica (France), Marianna Baldo of Italy, and Kevin Schiltz of Luxembourg, will appear in Tórshavn court this morning to face charges for breaching the Faroe Island’s Pilot Whaling Act.

The five Sea Shepherd crew were arrested on July 23 when over 250 pilot whales were slaughtered on the killing beaches of Bøur and Tórshavn in the Faroese drive hunt, known as the grindadráp.

Kunneke and Bondue were arrested on the beach of Bøur as the slaughter began, while Figarella and Baldo were arrested as they attempted to document the Bøur slaughter from their tender. Schiltz was arrested later that day at the second slaughter in Tórshavn.

However, in the Faroe Islands, the slaughter of pilot whales and other small cetaceans continues with the assistance of the Danish Police Force and Navy, and with the blessing of the Danish government.

CEO of Sea Shepherd Global, Captain Alex Cornelissen, said, “The police who arrested our crew are officers of the Danish National Police Force, employed by the government of Denmark. The arrests were made with the assistance of the Danish Navy, under orders from the government of Denmark. Today, our crewmembers will appear in a Danish court in the Faroe Islands to face charges under the Danish legal system. The Danish government’s obvious involvement in the grindadráp runs in direct opposition to the sentiments of the Bern Convention and undermines Denmark’s commitment to international law.” 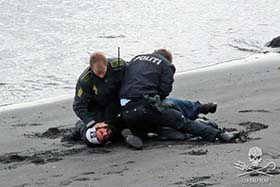 Sea Shepherd volunteer, Christophe Bondue, arrested at Bøur. Photo: Sea ShepherdThe July 23 slaughters and subsequent arrests have sparked outcry from the international community and condemnation of Denmark. Shocking photographs and video footage released by Sea Shepherd of the events have been shared worldwide.

Media reports suggest that all 179 Members of Denmark’s parliament have collectively received tens of thousands of emails from concerned members of the public, voicing opposition to the Danish government’s collusion with the Faroe Islands in the continuation of the slaughter.

“In order for Denmark to restore its international reputation regarding wildlife conservation, the government needs to immediately stop supporting this cetacean massacre,”said Captain Cornelissen.

A total of seven Sea Shepherd crewmembers from seven different countries have been arrested in the Faroe Islands since July 20. All are facing charges relating to breaches of the Pilot Whaling Act.

Susan Larsen of the United States and Tom Strerath of Germany were arrested on July 20 following an attempted grindadráp near Klaksvík in the northeast of the archipelago. Larsen has been allowed to return to the United States following a preliminary hearing. Strerath remains in the Faroe Islands, his passport confiscated by local authorities. A follow-up court date for the pair is yet to be scheduled.

For hundreds of years the people of the Danish Faroe Islands have been herding migrating pilot whales from the sea into shallow water and slaughtering them. The grindadráp is the single largest slaughter of marine mammals in Europe, and wipes-out entire family groups of whales and dolphins at one time. 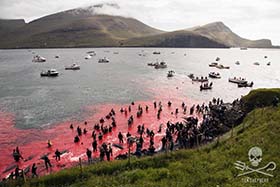 The sea runs red at Bøur with the blood of slaughtered pilot whales. Photo: Eliza Muirhead 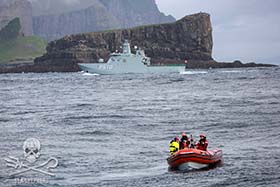 In the Faroe Islands, the grindadráp continues with the assistance of the Danish Police Force and Navy. Photo: Matthias Doller