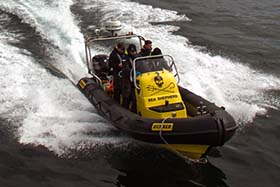 The Sam Simon’s small boat has been seized in the Shetland Islands. Photo: Sea ShepherdYesterday, authorities in the Shetland Islands, Scotland, seized a small boat of the Sea Shepherd ship, Sam Simon. The seizure was enacted at the request of Denmark, in response to a Letter of Request issued by the Chief Of Police of the Faroe Islands on August 22.

The warrant for the seizure was presented to the Captain and Ship Manager of the Sam Simon, which was in the Shetland Islands to refuel. In the warrant, authorities claim that there are “reasonable grounds for suspecting that an offence has been committed under the law of Denmark.”

It is understood that the confiscation relates to the small boat’s involvement in the defense of 61 pilot whales at a grindadráp at the killing beach of Sandavágur in the Faroe Islands on August 12.

The small boat is now in police custody in the Shetland Islands. Sea Shepherd is seeking further legal advice on the matter.

CEO of Sea Shepherd Global, Captain Alex Cornelissen, stated, “On the one hand, the government of Denmark refuses to abide by EU laws that protect cetaceans. On the other, Denmark is abusing its EU position and resources to try to silence Sea Shepherd’s opposition to the grindadráp. Denmark’s ongoing support of the slaughter of pilot whales in the Faroe Islands is a national shame.”

The seizure of the small boat comes in the wake of a legal challenge against the Faroe Islands Pilot Whaling Act (grind law/grindalógin).

Faroese legal consultant, former police officer and adviser in issues regarding safety, security, defense and emergency preparedness, Henrik Weihe Joensen, has filed charges against the Faroe Islands Ministry of Fisheries and Maritime Affairs, challenging the legality of the grind law.

In a statement made on August 20, Joensen says that the grind law is “invalid” because Faroese Parliament does not have the legislative authority to implement new laws in relation to police activity “which concerns action against persons and objects.”

Joensen believes that, if the Pilot Whaling Act is declared invalid, it may have a great impact on the cases already brought against Sea Shepherd and may also have implications for the political relationship between the Faroe Islands and Denmark.

The Pilot Whaling Act has been used as the basis for the arrests of 14 Sea Shepherd volunteers in the Faroe Islands this year, five of who have already been deported.

Today, the verdict in the case against another five Sea Shepherd volunteers who have been charged with violating the grind law will be handed down in a Danish court in the Faroe Islands.

The volunteers; Rudy de Kieviet of the Netherlands, Lawrie Thomson of the United Kingdom, Tobias Boehm of Germany, Alice Bodin of Italy, and Frances Holtman of the United States, are charged with disrupting the same slaughter at Sandaváguron August 12.

However, in the Faroe Islands, the slaughter of pilot whales and other small cetaceans continues with the assistance of the Danish police and navy, and with the blessing of the Danish government.

This year alone 490 pilot whales have been slaughtered in the Faroe Islands with Denmark’s backing.

“Sea Shepherd has both the legal right and the moral obligation to protect the pilot whales that pass through the Faroe Islands, and that is exactly what we will continue to do,” said Captain Cornelissen. 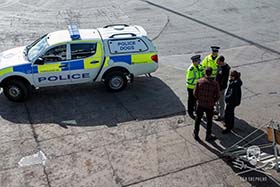 Police in the Shetland Islands deliver warrant for the seizure of the small boat to the Captain and Ship Manager of the Sam Simon. Photo: Iraultza Darias 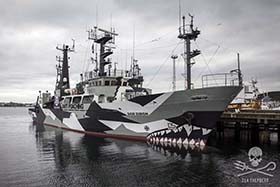