Pressure against the grindadráp builds from within the EU. 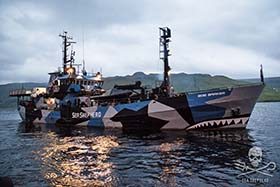 The conservation ship arrived at the port of Sund in the Faroe Islands yesterday at approximately 1200 local time. Upon docking, Danish Customs and Immigration officers boarded the ship, conducting a full search of the vessel and passport inspection of the crew.

Authorities did not indicate there was an issue with entry during the inspection, nor had they when the Bob Barker first notified port authorities on Friday that it intended to dock in Sund.

However, following the inspection of the ship yesterday all 21 crewmembers of the Bob Barker, including 11 European Union nationals, were issued with a Refusal of Entry notice and ordered to leave the 12 nautical mile limit of the Faroe Islands.

Danish authorities notified the Sea Shepherd crew that the Refusal of Entry notices were issued for suspicion of “affecting public order,” although the actual document gives no clear legal reasons for denial of entry.

The Bob Barker is the third Sea Shepherd ship to arrive in the Faroe Islands since June, but is the only one of the three ships whose crew has been denied entry. 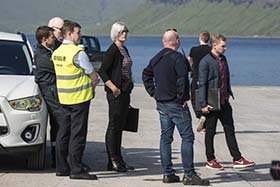 Danish authorities prepare to board the Dutch-registered Bob Barker. Photo: Sea ShepherdSea Shepherd believes that the Refusal of Entry notices issued by Denmark are unlawful, and has since commenced appeal processes to fight the order.

“By some odd reasoning, Denmark seems to think that the best way to divert attention away from its complicit support of the grindadráp is to conduct further legally dubious activity,” said Captain Alex Cornelissen, CEO of Sea Shepherd Global.

Despite the fact that the slaughter of cetaceans is banned in the European Union, including Denmark, the grindadráp continues with the support of Danish police and navy, and with the blessing of the Danish government.

“By denying the crew of the Bob Barker entry to the Faroe Islands, Danish authorities have proven that they are more interested in supporting the slaughter of pilot whales than they are in upholding their EU responsibilities and maintaining their relationships with other EU countries. They have also shown how effective Sea Shepherd has been in holding Denmark accountable for the on-going slaughter of cetaceans in the Danish realm,” said Captain Cornelissen.

This year alone 490 pilot whales have been slaughtered in the Faroe Islands with Denmark’s backing. A total of 14 Sea Shepherd volunteers, representing the United Kingdom, Italy, Corsica/France, the Netherlands, Belgium, Germany, Luxembourg, South Africa, Canada and the United States have been arrested for standing in defense of the whales.

On Friday, charges against two of the volunteers, Tom Strerath of Germany and Susan Larsen of the United States, were dropped due to lack of evidence. Despite the reprieve, the small boat, Farley, which the pair was driving at the time they were arrested, remains in police custody. 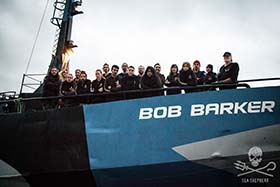 The international crew of the Bob Barker, including 11 EU nationals, denied entry to the Faroe Islands by Denmark. Photo: Sea Shepherd“Now that charges against Tom and Susan have been dropped, there is simply no legitimate reason as to why the Farley remains in custody. We know that the laws that govern the grindadráp have been designed to silence Sea Shepherd. As they have failed to achieve this desired affect, it is clear that Danish authorities are reverting to blatantly underhanded tactics to try to shut us down,” said Captain Cornelissen.

As Sea Shepherd continues its defense of the pilot whales, international pressure against the grindadráp continues to mount from countries within the European Union.

In early August, two major German cruise-liner companies, AIDA and Hapag-Lloyd, announced that they have cancelled tours to the Faroe Islands in response to the on-going slaughters.

In the past month, political representatives from Luxembourg, Italy and the United Kingdom have all publically expressed their distain for the on-going practice of the grindadráp, which Denmark actively supports in defiance of the sentiments of their EU obligations.

On August 19, the Scottish town of Wick announced that it had severed its 20 year long twin-town relationship with the city of Klaksvík, and would not look to re-instate official relationships until the "disgusting" slaughter of whales in the archipelago is banned.

“The EU has woken up to Denmark’s shame. The wheels are in motion and they’re clearly turning against the Danish government’s on-going support of the grindadráp,” said Captain Cornelissen.