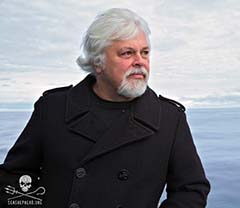 Captain Paul Watson, founder of Sea Shepherd Conservation Society.
Photo: Sea Shepherd/Barbara VeigaCaptain Paul Watson, founder of Sea Shepherd Conservation Society, a U.S.-based 501(c)(3) non-profit marine conservation organization, filed a full petition yesterday with the Inter-American Commission on Human Rights (IAHRC) in Washington, D.C., accusing Costa Rica of using the judicial system to violate his rights and derail his conservation efforts. If successful, this petition could bring an end to a lengthy battle between Captain Watson and the Costa Rican government, including potential dismissal of the Interpol Red Notice it issued in 2012 requesting his arrest and extradition.

Filed by Costa Rican attorney Abraham Stern Feterman, the petition alleges that the Costa Rican judicial system has deprived Watson of access to justice, and violated his rights to due process and consular assistance. Feterman says he hopes this filing will mark the beginning of the end of Watson’s problems in Costa Rica. “Captain Watson has suffered many injustices at the hands of the Costa Rican government, which for 13 years has engaged in a politically motivated campaign aimed at obstructing one of the world’s foremost marine conservationists, and protecting the lucrative poaching trade in the region,” Feterman said. “We look forward to seeing justice served and Captain Watson cleared of all charges.”

The petition asserts that “legal proceedings against Paul Watson [in] Costa Rica are the direct result of a political maneuver to disable one of the most renowned conservationists in the world and free Costa Rica to continue the traffic of shark fins, a practice that violates environmental stability of the planet and the natural balance of the marine ecosystems.”

The Costa Rican government has sought Watson’s extradition based on an event that occurred in April 2002. At that time, Paul Watson was captaining the Ocean Warrior when it encountered the Varadero I, a Costa Rican vessel that was conducting illegal shark-finning operations in Guatemalan waters. Under the authority of Guatemalan law, Watson attempted to arrest the Varadero I, but the poachers broke free and fled toward Costa Rica.

Nevertheless, later that month the Costa Rican authorities filed a criminal complaint alleging that Watson and his crew threatened and attempted to murder the seven crew members of the Varadero I, as well as damaging their vessel. This complaint was based on testimony supplied by the Varadero I crew. A local foundation offered Captain Watson local counsel, yet neither he nor his appointed counsel were provided timely notification about a preliminary hearing on the matter in December 2002. Although the allegations of attempted murder were later dropped, when Captain Watson did not appear for trial, the Costa Rican court declared him a “rebel” and issued a warrant for his arrest on the charge of “violation of ship traffic.”

The petition filed yesterday claims that the Costa Rican courts have committed a number of serious errors in the legal proceedings against Watson, including ignoring the fact that they do not have jurisdiction because the events in question took place in Guatemalan waters, failing to inform Watson of his right to consular assistance, and allowing the case to proceed to trial with inadequate evidence.

The petition follows a request for precautionary measures that Watson filed with the IAHRC on September 25, 2015. It calls on the IAHRC to open a case to allow Watson to establish Costa Rica’s responsibility for violating his rights under the Hague Convention and the Vienna Convention, and to order Costa Rica to pay reparations. The request for precautionary measures could be resolved sometime in December 2015, while the petition to the Costa Rican government may take years to resolve.

“In 2002 I intervened against a documented illegal shark finning operation in the waters of Guatemala at the request of the government of Guatemala. No one was injured and no property was damaged. I interfered with poaching profits and so I angered some well-placed individuals. We filed this case with the Inter-American Commission on Human Rights because my human rights have been violated by a politically motivated campaign to prevent my conservation efforts to defend endangered and threatened marine species,” said Watson.