Sea Shepherd Calls On Navies To Intercept The “Slave” Ship. 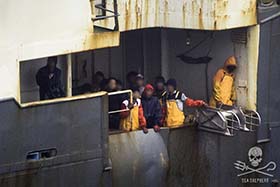 The deck crew of the Thunder, believed to be trafficked persons under the UN Convention against Transnational Organized Crime. Photo: Simon AgerIn a radio communication to the Sea Shepherd ships Bob Barker and Sam Simon, the Captain of the Interpol-wanted poaching vessel, Thunder, has reported that one of the deck crew, said to be Indonesian, has attempted suicide.

The report comes in the wake of the news that the Thunder has been de-registered by its flag state, Nigeria, for violations of its registry conditions; an action that means that the Thunder is now officially a stateless, pirate-vessel as defined by the United Nations Convention on the Law of the Sea (UNCLOS).

In the follow-up to the attempted suicide attempt, the Sea Shepherd ship, Bob Barker, launched a small boat and attempted to deliver notes in plastic bottles to the Thunder's Indonesian deck crew. The notes stated that the Sea Shepherd ships are willing and equipped to take the on board not only the injured crewmember, but the entire deck crew of Thunder.

The notes were intercepted by the officers on the Thunder, who are believed to be of Spanish descent, and thrown overboard.

The Captain of the Thunder then radioed the Bob Barker and stated that the Indonesian crew did not want further communication with the Sea Shepherd ships. Another man, said to be the “Indonesian deck boss”, then read a prepared statement in Spanish, stating that the "captain is a good person" and that they did not want Sea Shepherd to deliver any more messages.

An Indonesian speaker on board the Sam Simon then radioed the Thunder in Bahasa, the local Indonesian language, to verify the contents of the prepared Spanish statement. The Thunder’s Captainresponded, saying the deck boss had "gone to bed" and that Sea Shepherd would not be able to speak to him again.

Despite requests for further information, the Captain of the Thunder would not provide the name of the Indonesian deck boss, or the name of the crewing agency responsible for hiring the deck crew. He also stated that the poaching vessel was equipped to remain at sea for another nine months.

Captain of the Bob Barker, Peter Hammarstedt, responded, repeating Sea Shepherd's offer to take the on board the deck crew of Thunder. The Captain of the Thunder refused the offer. 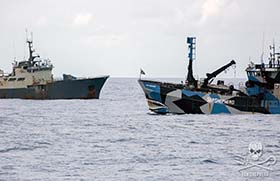 The Bob Barker in a high seas stand-off with poaching vessel, Thunder, which has now been stripped of its registry by former flag-state, Nigeria.
Photo: Giacomo GiorgiCaptain Hammarstedt, said, “I firmly believe that the Indonesian crew of the Thunder are trafficked persons under the United Nations Convention against Transnational Organized Crime, specifically the Protocol to Prevent, Suppress and Punish Trafficking in Persons (General Assembly Resolution 55/25) and the Protocol against the Smuggling of Migrants by Land, Sea and Air (General Assembly Resolution 55/25).I also believe that they are being held against their will and know that they are not allowed to communicate freely - this on board a vessel suspected of numerous fisheries crimes and one that has exhibited violent behaviour toward my crew. The attempted suicide on board the Thunder, and the Captain's apparent intention to stay at sea, gives me strong reason to worry about injury and death on board that vessel in the absence of government intervention.”

In light of these latest developments, Sea Shepherd has called upon support from the world's navies to intervene and apprehend the Thunder immediately.

Captain of the Sam Simon, Sid Chakravarty, said, “Article 99 of the UNCLOS states that, 'Every State shall take effective measures to prevent and punish the transport of slaves in ships authorized to fly its flag and to prevent the unlawful use of its flag for that purpose.' Further, Article 110 of UNCLOS empowers naval ships to board a vessel encountered on the high seas if there is 'reasonable groundfor suspecting' that the vessel is 'without nationality' or is 'engaged in slave trade.' The Thunder is now both without nationality and in all reasonable assessment, must be considered to be engaged in slave trade. In the name of human decency, in accordance with international law, responsible governments must immediately send naval vessels to intervene and shut down this floating prison.”

The Bob Barker has been engaged in a continuous pursuit of the Thunder for 100 days since it was first intercepted on December 17 2014, on the Banzare Bank, Antarctica.

The poaching vessel is the most notorious of six remaining IUU vessels – which Sea Shepherd calls the “Bandit 6” - that are known to target vulnerable toothfish in the Southern Ocean.