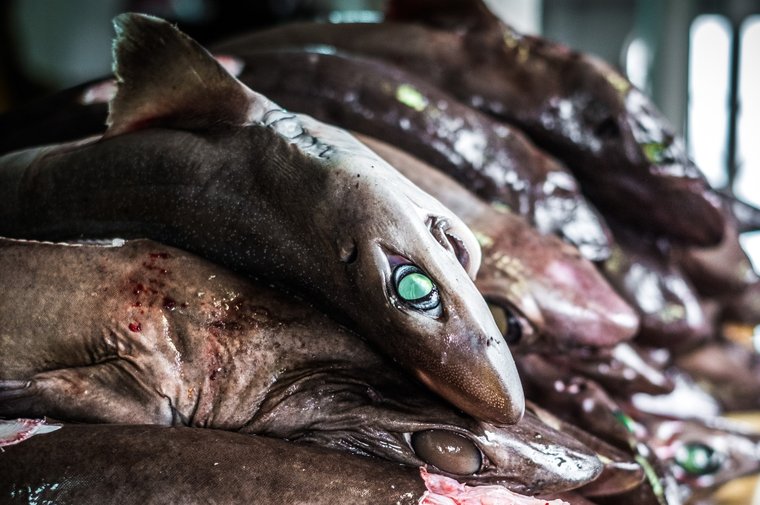 The arrest of the internationally-blacklisted fishing vessel Labiko 2 by the Liberian Coast Guard, assisted by Sea Shepherd, gives insight into the shadowy and largely unregulated shark liver oil industry. After being kicked out of European waters, these unscrupulous owners and operators, mostly based out of Spain, have set their sights on West Africa.

In the mid-1990s, the largely Spanish-owned fleet of approximately 50 deep-water shark fishing boats wreaked havoc in the North East Atlantic Ocean. For almost ten years, these vessels crisscrossed the continental shelf off the United Kingdom with gillnets until the populations of deep-water sharks fell to 20% of their original numbers. Fisheries scientists estimate that the fleet’s combined length of net fishing at any one time was between 5,800 and 8,700 kilometers, the equivalent of stretching a net from Spain to the United States.

The activity of this fishing fleet, mostly based in Spain, was poorly documented, with little information provided to fisheries management on catch and by-catch. The discard of fishing nets at sea, both through unintentional loss as well as deliberate dumping, was common practice. Approximately 30 kilometers of gillnet was lost per vessel per 4-8 week fishing trip. These lost nets, also called ‘ghost nets’ can go on killing anything it “catches” for many years; they also equated to 750 tons of plastic pollution discarded at sea every month.

Both the amount of fishing gear used, and the high-level of lost gear, resulted in the deep-water shark populations plummeting.

The discovery of a shark liver oil production facility on board the Labiko 2 in Liberia reveals that the shark plunderers have now come to West Africa.

When the Labiko 2 was boarded by the Liberian Coast Guard, assisted by Sea Shepherd, it was quickly uncovered that the vessel was not using longline fishing gear as per their license, but rather prohibited deep-water gillnets, and that these gillnets were being used to target deep-water sharks. It was further discovered that the vessel, under its previous name ‘Maine’, was on the international blacklists of three regional fisheries management organizations. When applying for its fishing license in Liberia, the Labiko 2 had submitted what is known within fisheries enforcement as a ‘trojan horse application’, namely an application to conduct a different fishery than intended in order to cloak the destructive impact of their actual activities.

“The owners and operators of the Labiko 2 conspired to circumvent the laws of Liberia, devastating the Liberian marine environment in the process. I’ve said it before, and I’ll say it again - the Republic of Liberia is not open for business to plunderers”, said Hon Brownie Samukai, Liberian Minister of National Defense.

Shark species are slow to grow, late to mature, and breed small numbers of offspring, and thus are particularly vulnerable to overfishing. As shown though cargo manifests found on board the Labiko 2, the shark liver oil production industry, because of the sheer number of sharks killed, has an environmental footprint that can wipe out a fishery in just years.

“The Labiko 2 is a floating environmental catastrophe and the Liberian Coast Guard and Sea Shepherd have saved hundreds of thousands of sharks through the arrest of this notorious poacher. It is now incumbent upon Liberia to take strong legal action against the Labiko 2 to ensure that populations of sharks in Liberia do not meet the same fate as deep-water sharks did in Europe, East Africa and India”, said Sea Shepherd Director of Campaigns Peter Hammarstedt.

Watch the video: "Poacher killed half a million sharks for liver oil"