Winds of Mercy Spare the Seals for a Second Day

Winds of Mercy Spare the Seals for a Second Day 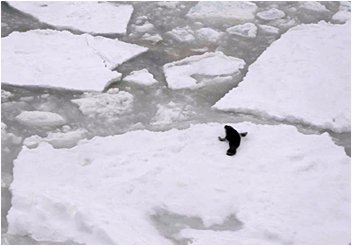 Report from the Farley Mowat
By Captain Paul Watson

Neptune is being good to us. The God of the Sea and Storms is sending another whirlwind of freezing rain on the heels of the gale that tossed us around yesterday.

The forecast this morning shows an area of low pressure over Newfoundland approaching southern Labrador this afternoon to cover the Belle Isle Bank this evening as it intensifies. The low will gradually move northeastward to lie south of the East Labrador Sea on Thursday afternoon. Strong to gale force east- to north-easterlies developing ahead of the low are increasing from gale to storm force northerlies as it passes. Storm to hurricane force winds are expected to develop further behind the low late this evening or overnight and continuing tomorrow.

The Canadian Coast Guard has already answered more than 400 calls for assistance from vessels trapped in ice or with problems.

The latest news is that the Canadian Department of Fisheries and Oceans will open the seal slaughter tomorrow morning. Considering the weather, this does not make sense unless DFO wants to take the ole Captain Abraham Kean approach to sealing and sacrifice a few men to kill the seals. So, we anticipate that the seal slaughter will be delayed again and will not open tomorrow morning. However, we are standing by out here on the rolling waves in the event they proceed with such lunacy.

We still have our very own Canadian Coast Guard escort, the Henry Larsen. Feels almost like family considering my mother's family are Larsens. They have been with us for three days and stay about five miles off. The Henry Larsen is a big ship of a hundred metres, a draft of 7.3 metres, and a gross tonnage of 6166 tons making her about 10 tens as large as the Farley Mowat. It is strange and somewhat flattering that as other Coast Guard units are extremely busy answering distress calls, that the Canadian Department of Transport can delegate one ship just to keep on an eye on us.

On another point, I have had some criticism from Newfoundland because I have been referring to this massacre of seals as a slaughter and not a hunt. The fact is that I deliberately refrain from referring to this as a seal hunt. I am an avid anti-hunter but I do know what hunting is and what it is not.

When you go into the nursery of a baby animal and club or shoot it when it is helpless you can hardly call it a hunt. There is no stalking, no searching, no tracking, and no waiting. There is no flight by the animal, no resistance, no danger of counter attack and no great skill involved. I don't know of a single hunting activity that involves killing new born animals. This killing of baby seals is the equivalent of snatching helpless baby birds from their nests or shooting fawns during deer season.

We need to call it what it is - a senseless and brutal massacre of young defenseless animals. In other words - a slaughter.

Magdalen Island sealer Pol Chantraine once wrote that he killed seals because their incessant cries filled his heart with a murderous rage and a desire to kill them to restore silence to the ice. That sentiment has always mystified me. What kind of man would extinguish life to seek silence? The only answer that it possibly could be is the kind of psychopath depicted in the book and movie "Silence of the Lambs."

I don't want the ice flows to be silent. I want them teeming with life and the joy of the newly born. It is incredible to be on the ice and hear the voices of life, and it is heard best when you lie on the ice or swim in the leads where the sounds take on a completely different meaning on the level where the seals live with their voices only inches above the floes.

But people like Chantraine and I see the world through different eyes, and I suppose that this is the great dilemma of humanity. Irresistible ideas in collision with immoveable traditions. And therefore, it is a "push and shove' with all the attending animosities and hostility.

But no idea can evolve without conflict to test and strengthen it. Conservationism and especially the idea of animal rights are revolutionary perspectives that are relatively newly born and are the consequences of resource diminishment, human population growth, diminishment of biodiversity, and the new empathy that is emerging as a result of people becoming more aware of the vast and diverse non-human world around them.

It is the evolution of a purely utilitarian approach to nature into a more harmonic inter-relationship with nature.

A clash of these two perspectives will take place tomorrow morning when I am scheduled to debate the Canadian Minister of Natural Resources John Efford, who is one of the more fervent defenders of killing seals.

This is the man who stood up in the Newfoundland legislature and said, "Mr. Speaker, I would like to see the six million seals, or whatever number is out there, killed and sold, or destroyed or burned. I do not care what happens to them . . . the more they kill the better I will love it."

And this from the man who is in charge of safeguarding the natural resources of Canada. I wonder how many other natural resources, other species and habitats that Efford does not care about?

Canadian Broadcasting Corporation (CBC) in Cornerbrook will be interviewing me onboard the Farley Mowat by satellite phone and Efford will be speaking by phone from Ottawa. It should be interesting.

Outside, I can hear the wind intensifying. Two low pressure areas on a collision course right in the area where the seals are and the sealers have congregated. It could be coincidence. It could be divine intervention. It could be karma. One thing it is for sure and that it is good news for us and the seals, for tomorrow for sure, and possibly into Friday.

Many of these sealers are crab fishermen and the crab fishery is more lucrative for them and is scheduled to begin soon. This means they have a limited time to kill seals so every day lost is a good day for seals.

Disruption rides these winds and the howling gales are sweet music to our ears. The darkening skies, the freezing rain, the plummeting temperatures all conspire to support our quest to save these seals. The decks of the sealers are not awash with blood but instead with freezing brine, and thus, we have no complaints today out here on the heaving Northwest Atlantic. For today at least, we are a happy crew.