Whales Frolic in Peace around the Cetacean Death Ship

Whales Frolic in Peace around the Cetacean Death Ship

The crew of the Sea Shepherd ship Steve Irwin watched a very peaceful sight today as two Humpback whales accompanied by a pod of Pilot whales swam around the Japanese factory ship Nisshin Maru as if to taunt them for being unable to continue their whaling operations.

One of the whales appeared to be half white, perhaps the half brother or sister to the beloved and famous all white whale Migaloo.

The Nisshin Maru has stopped running and is dead in the water at 63 Degrees 22 Minutes South and 114 Degrees, 37 Minutes East.

The Sea Shepherd crew will not allow any whales to be killed by the Japanese whaling fleet for as long as the Steve Irwin remains with the fleet.

"I have not seen a whale die since I left Greenpeace in 1977," Said Captain Paul Watson. "We will not allow a whale to die on our watch down here and as the poet Ralph Waldo Emerson once wrote, 'we are prepared to risk our lives, our ship and all,' in order to guarantee that the whales remain unharmed."

The Japanese have not killed a single whale since February 23rd. The Sea Shepherd Conservation Society hopes to prevent the killing of any more whales for the next two weeks.

Over the last 36 hours the Steve Irwin has chased the Nisshin Maru westward for over 725 miles in 50 hours averaging a speed of 14.5 knots. During that time, the two ships have passed numerous Piked, Humpback, Pilot, Fin and Blue whales.

"I cannot even begin to describe what a joy it is to see these whales swimming free as the largest whale killing ship in the world cruises harmlessly past them because we are here," said Engineer Jessica Gartlan 20, from Melbourne, Australia. 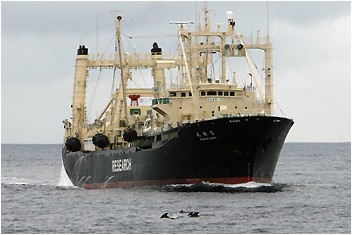 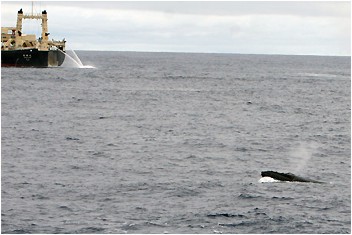