One whale remains alive on the beach and is being cared for until the sea conditions allow for her to be assisted back to her pod.

The five Sea Shepherd crew included one biologist and two documentarians. We hope to have video from and photos within a few days.

The crew measured the size and length of each animal and took biological samples from the dead whales with hopes of securing evidence as to the cause of death.

Stranding events can be caused by military exercises, seismic research, and pollution. It is well established that pilot whales contain high levels of mercury and this could affect their behaviour.

"We need to get forensic evidence like inner ear bones, tissue samples and even entire brains to conduct the research to find the cause of these strandings," said Captain Paul Watson. "The Australian government has promised to allocate funds for research on whales and this is a good place to start."

The Sea Shepherd Conservation Society would like to point out that Parks and Wildlife have been spot on in addressing this latest disaster and they did a splendid job of organizing a constructive rescue that saved a quarter of the stranded animals. 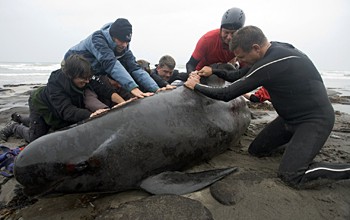