For Department of Fisheries Director, Stuart Smith to say that Western Australia can provide a sustainable shark fin product to the Asian market, completely undermines the important work that has been done by Branson, Ming, Chan and all the non-government organisations campaigning to save the sharks. Not to mention the tireless work conducted by Sea Shepherd worldwide, most notably in the Galapagos where Sea Shepherd is working alongside authorities in their efforts to stamp out the illegal poaching of sharks in the Galapagos Marine Reserve.  In addition to WA and Galapagos, there are various states and provinces around the world that have moved to ban shark finning or import/export of shark products. Statements like the one made by Stuart Smith show a complete lack of respect not only for sharks and the natural world, but also for future generations and highlights that Mr. Smith is completely uneducated about the important role sharks play in the health of our oceans and the dire situation they face globally.

“There is no such thing as sustainable shark fisheries, sharks are threatened with extinction worldwide. The decision by the WA government was made by politicians who have lost touch with reality. It’s greed over logic, profit over nature, money over our future. Here in the Galapagos people are in touch with nature and they understand that the value of a live shark far outweighs the value of a dead one. It is time the WA politicians wake up and join the program” –says Alex Cornelissen, Sea Shepherd Galapagos Director 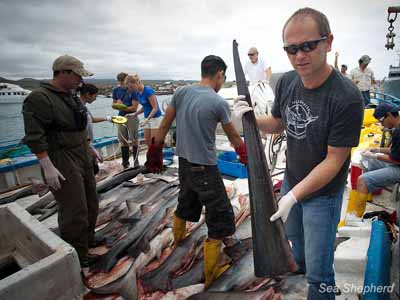 To offer one of the last remaining strongholds for the sharks to the markets of Asia would be like finding an undiscovered group of endangered African Black Rhinos and offering them to poachers.  There is no such thing as sustainable shark fin and to open this area up for shark fishing will only allow an even further level of corruption in the illegal trade in shark fin, a trade that is only third to the illegal trade in drugs and arms. Is this an industry that Australians want to be linked to?

The world is very concerned about the state of the world’s shark populations and will be watching the Western Australian government very closely on this. From a pure economic sense, not only would there be a direct loss in the dive industry, since many divers come to WA to see sharks, but due to the utter outrage of the world community, one may even seen a boycott of tourism in WA if this offer of WA shark fins were seriously ‘put on the table’ to the Asian market.

Australian Director, Jeff Hansen stated, “Imagine where our humpback whale population would be today, if right on the eve of the global moratorium on commercial whaling, some nation offered up a sustainable form of humpback whale meat to the market. Sharks have kept our oceans healthy for over 450 million years, oceans that give us up to 80 percent of our oxygen, we rely on sharks every day for our very survival. We need them, they don’t need us, and it’s long over due that we give them the respect they deserve. We can live just fine without a tasteless, nutrition-less bowl of soup, but we cannot live in this world without sharks.”

What can you do to help?

Please contact Fisheries Minister Norman Moore to let him know your concerns about this matter.

Or Australians can also meet, phone or email their local MPs about not wanting Western Australia to assist in the continuing of this barbaric trade in shark fins. 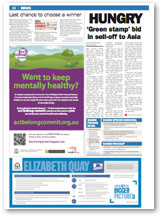 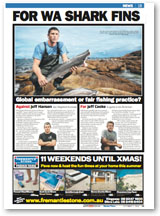