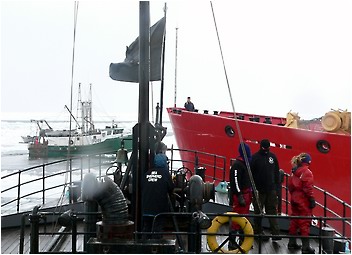 Sea Shepherd Conservation Society cannot intervene against the cruel slaughter of harp seals this year, firstly, because Captain Paul Watson has been banned by the Canadian government from going anywhere near the area where the seals are killed. If he attempts to approach the area he will be arrested and charged with contempt of court and could receive up to six months in prison.

"This in itself would not stop us," said Captain Watson. "Our real problem is that the only way we can intervene is with our ships and both of our ships are on the far side of the world in Australia having just returned from disrupting illegal Japanese whaling activities in Antarctica."

Despite an estimated kill of over 250,000 baby seals this year due to diminished ice coverage caused by global warming, the Canadian government imposed an unacceptably high quota of 275,000 seals to be slaughtered. 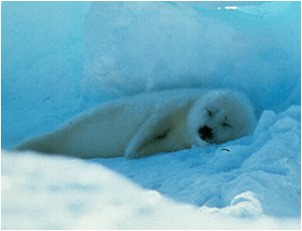 The only good news is that heavy ice on the front (ironic, considering the diminished ice in the Gulf) has prevented some 60 small sealing vessels from reaching the ice. The government has directed three large Coast Guard icebreakers to assist the thugs killing the seals.

Meanwhile, Canadian government-subsidized ice-breakers are working overtime to break the sealers loose so they can reach the seal pups.

In addition to heavy ice, strong gales are forcing many of the sealing boats back into port. "Let's hope the winds and the ice send a few of those baby-killing stink pot boats to the bottom," said Captain Watson.

The government has been bragging that there has been very little controversy over the killing of seals this year.

"The truth is that the government controls much of the Canadian media's reports on the seal hunt," said Captain Watson. "We call the CBC ‘Controlled By Canada.'" There has, indeed, been much negative coverage in Europe and that is where it is important. To end this obscene slaughter we need to get these seal pelts banned in Europe."

"What the lack of headlines in Canada is telling us," continued Captain Watson, "is that there is a need for the Sea Shepherd approach. When we are there we make headlines on this issue with controversial confrontations. When we are not there, or Paul McCartney can't make it to the ice, things tend to get boring and the media bores very easily."

Sea Shepherd Conservation Society is hoping to be in position in 2008 to once again intervene dramatically against the world's largest marine mammal slaughter.