We Must Stop the Albatross Killers

We Must Stop the Albatross Killers 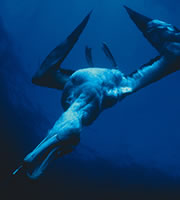 Albatross tangled and drowned in longline - photo courtesy of RSPB

The Royal Society for the Protection of Birds (RSPB) is appealing to bird lovers around the world to join the call to crack down on illegal longline fishing. According to the RSPB over 300,000 seabirds, including 100,000 albatrosses, die annually from being hooked on longlines.

Longline fishing sets lines up to 100 miles long, with thousands of baited hooks. On any given day over 50,000 miles of long lines are set in the world's oceans.

Even in a World Heritage Site like the Galapagos, fishermen recently held national park offices hostage demanding that the government allow the setting of longlines in the Galapagos Marine Reserve.

Dr Mark Avery, RSPB Conservationists are hoping to collect thousands of signatures urging the United Nations to act against the pirate fleets.

If nothing is done, the RSPB is predicting tragedy for the albatross, with 19 of the 21 species in imminent danger of extinction.

Dr Mark Avery, director of conservation at the RSPB, said: "This is a senseless slaughter and one that must be halted before we lose albatrosses for good.

The Sea Shepherd Conservation Society has been active on this issue for years. Sea Shepherd ships and crew have confiscated hundreds of miles of illegal longlines over the last few years and they continue to do so.

The Sea Shepherd Conservation Society is empowered to intervene in accordance with the United Nations World Charter for Nature that states that non-governmental organizations and individuals may act to uphold international conservation law.

In this situation the Sea Shepherd Conservation Society is upholding The Agreement on the Conservation of Albatrosses and Petrels (ACAP). This treaty has been ratified by Australia, Spain, Ecuador, New Zealand and South Africa.

It is a disgrace that the British government has not signed on to this because it is imperative that British overseas territories like the Falklands, South Georgia and Tristan da Cunha be protected as breeding grounds for the birds.

The Sea Shepherd Conservation Society would like to establish a new market for longline products. The Society is offering confiscated long line hooks for and pieces of confiscated genuine long line in exchange for any donation to help us to confiscate more of these insidious monofilament lines.

Every deadly hook we remove from the sea is one less threat to the albatross, turtles, sharks and fish that die in agony on these modern day weapons of ecological mass destruction.

We need your support to continue to do so.