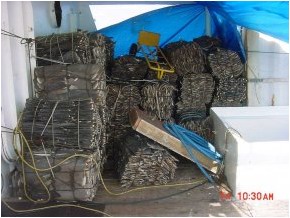 Just yesterday, I wrote a letter to the South China Morning Post in response to a letter from the Chairman of the Hong Kong Shark Fin Merchants Association.

Chairman Chiu Ching Cheung stated as fact that all the shark fins sold in Hong Kong have a CITES license. If that is so, than many of these licenses are forgeries and the proof is in today's verdict by a San Diego Federal judge.

The Hong Kong company Tai Loong Hong Marine Products Ltd has been ordered to pay a fine of $618,956.00 for trading in illegal shark fins. The company's chartered ship King Diamond II was seized in 2002 by the U.S. Coast Guard with 64,695 pounds of shark fins that it had collected off the coast of Mexico. 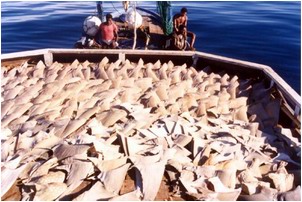 The numbers of sharks killed for this haul is estimated at between 16,000 and 20,000 animals. The ship was en route to Guatemala to offload the fins for trans-shipment to Hong Kong.

Also included in the verdict are the Hawaiian company Tran and Yu Inc and Captain Chien Tan Nguyen. The two companies and the captain were charged with 26 counts of possessing shark fins on board a U.S. fishing vessel without possessing the bodies of the sharks.

The fine is the highest penalty of record for violation of the Shark Finning Prohibition Act.

"We are sending a clear message: Those who choose to continue in the trade of shark fins must do so within the strict requirements of federal regulations," said Special Agent-in-Charge Mike Gonzales, NOAA Fisheries Office for Law Enforcement - Southwest Division. "The law requires the entire shark to be landed with the fins so that the whole fish can be utilized."

The vessel King Diamond II, (home port Honolulu, Hawaii), was boarded by the U.S. Coast Guard on August 14, 2002, approximately 350 miles southwest of Mexico. The vessel had 64,695 pounds of shark fins onboard with no shark carcasses. The Coast Guard detained and escorted the vessel to San Diego, California, where NOAA agents boarded the vessel, interviewed the captain and crew, and seized the load of fins. 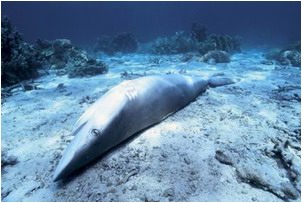 A shark, after being finned, is carelessly discarded.

The Shark Finning Prohibition Act, which is part of the Magnuson-Stevens Fishery Conservation and Management Act, is a federal law that makes it illegal to possess shark fins without the corresponding carcasses. In addition, it is illegal for a U.S. company to possess, purchase, and/or sell shark fins without offloading all the shark carcasses and fins at the same time and then weigh the carcasses and fins to determine the lawful ratio of five percent fins to carcass ratio. U.S. and foreign fishing vessels may not possess or offload shark fins without the corresponding carcasses. The maximum penalties for violating the act include $120,000 per count, and forfeiture of the fishing vessel and/or its cargo.

Sea Shepherd Conservation Society applauds the United States Coast Guard and National Marine Fisheries Service for the successful investigation and prosecution of this case. It is an important precedent setting case and sends a strong message to shark poachers around the world.

The verdict also exposes the fact that Hong Kong merchants are dealing in illegal shark fins despite their claims to be completely above board. Mr Chiu Ching Cheung is very much aware of the illegal activities involving shark fins in Hong Kong. His claim that all shark fins sold have proper CITES certification is bogus and he knows it.