Urgent UpDate from the Galapagos

Urgent UpDate from the Galapagos

The Galapagos National Park and the Darwin Research Station on Santa Cruz Island in the Galapagos is presently under attack by a mob of angry fishermen. This message is being posted at 1800 Hours PST on the evening of May 28.

The fishermen are threatening to vandalize the offices of the National Park and the Darwin Research Station and have threatened to kidnap and possibly injure or kill Lonesome George, the last surviving member of one of the sub-species of giant land tortoise. 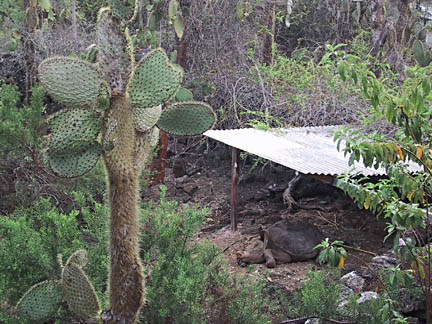 The Sea Shepherd crew on the Farley Mowat at anchor in Academy Bay have joined the Galapagos Park rangers at barbed wire barricades erected at the Park office entrances. Another group of Sea Shepherd crew have been sent to guard Lonesome George who resides at the Park.

The National Park has requested the assistance of forty marines from the Ecuadorian Navy. As of the posting of this update, they had not arrived

Last night the fishermen rioted in Puerto Ayora and forced the closure of the one gasoline station on the island.

One of Sea Shepherd's crew, Ross Wursthorne of Florida cycled up to the gas station to observe the disturbance. He was recognized as a member of the crew of the Farley Mowat and was physically attacked.

Fortunately Ross was on a bicycle and managed to escape although the fishermen ripped his shirt from his back.. He suffered minor scratches.

The fishermen are dissatisfied with the quota they received of four million sea cucumbers. This quota was given earlier in May despite the scientists advising that no quota should be allocated due to the diminishment of the sea cucumber populations of the Galapagos.