Update on Six Dolphins Shipped on Monday From Taiji

An observant Cove Guardian was on the same flight as the buyer and noticed the buyer’s bags carried the Marineland Mallorca (an Aspro park) logo. By chance, she saw him again at the Cove the following day working with the dolphins and preparing them for transport alongside the trainers. He was also on site managing and filming the loading process with the Fisherman’s Union killers. Sources on the ground have identified the man as a possible former employee of Marineland Mallorca. Sources have reason to believe he may have purchased the dolphins on behalf of the Lisbon Zoo or a marine park in the United Arab Emirates, where they may be headed. In lieu of the new information gathered, it seems the dolphins are not headed to Aspro International marine parks in Europe, as originally reported. The information received was erroneous, as this buyer was not purchasing for Aspro, so Sea Shepherd is retracting that information.

“Six bottlenose dolphins were stolen from their families and everything that is natural to them and loaded into shipping crates to be flown around the world,” said Melissa Sehgal, Cove Guardian leader. “Now it is more than two days later and the dolphins still have not yet reached their destination. What does that tell you about what these animals are forced to endure for human entertainment? When you buy a ticket to a dolphin show or a swim-with-dolphin program, you are a party to their immense suffering,” she added.

The buyer purchased and on Monday morning transferred six live bottlenose dolphins captured from the wild just three weeks ago in Taiji’s infamous killing Cove. Spotted on and off since Saturday at the Taiji Fisherman’s Union — the fisherman that conduct the dolphin and pilot whale drives — the buyer spent hours working with the dolphins and local trainers to ready the dolphins for transport. The bottlenose dolphins were purchased from the Taiji Whale Museum, which takes wild-caught dolphins from the Cove and sells them for several hundred thousand dollars apiece to stark and lonely lives in captivity. 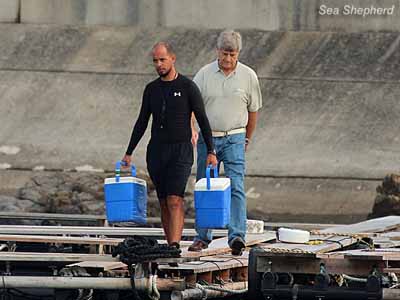 Taiji is “ground zero” for the lucrative, international trade in live dolphins. These highly intelligent, social beings are stolen from their families in the wild and forced into a solitary, confined existence where they must perform for their meals. In most cases, the rest of the captured pod are slaughtered for meat.  As part of an agreement between the Fisherman’s Union and the World Association of Zoos and Aquariums, the six dolphins purchased were not part of a hunt in which dolphins were slaughtered, which typically occurs.  However, in one of the drives — in which the dolphins not chosen for sale were driven back out to sea — one dolphin succumbed to the stress of the drive or was injured in the process of release and was later found floating dead in the outskirts of the Cove. The Cove Guardians believe its body may have been taken to the butcher house and sold for meat.

The brutal dolphin massacre that goes on in Taiji is the world-renowned slaughter made famous by the Academy Award-winning documentary, “The Cove” (2009). Cove Guardians are Sea Shepherd sentries who witness and document the horrific dolphin killings that occur annually in the tiny fishing village. They are volunteers from around the world who work tirelessly on the ground in Taiji to spotlight the atrocities being committed against these much-beloved, captivating and social creatures with a goal of bringing an end to the massacre.

What YOU Can Do for the Dolphins:

• Call, fax or email Japan Airlines and firmly but politely tell them you demand they stop transporting dolphins captured from Taiji’s Cove.

• Submit comments online:
Scroll down to ‘your comment to JAL’

• Please be on the lookout for these dolphins headed to a marine park in your region. The first person to accurately identify and locate where these dolphins end up, will receive a Cove Guardian T-shirt. Please look for our post on the Sea Shepherd Cove Guardians Facebook page for information. 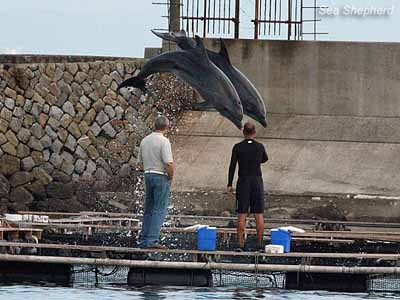 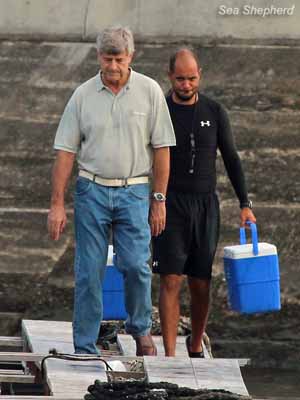 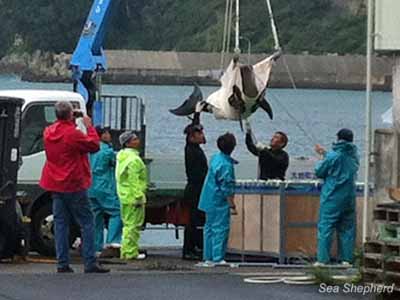 Buyer (in red jacket) films as dolphin cries while
being loaded onto transfer truck headed for airport
Photo: Sea Shepherd 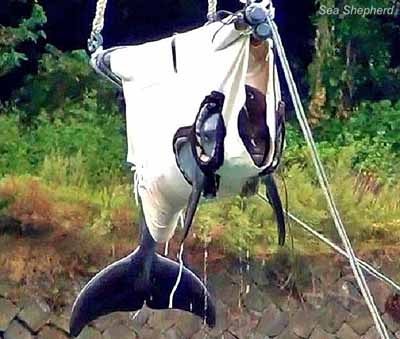 Terrified dolphin cries as it is carried by crane to transfer truck
Photo: Sea Shepherd