Update from the Farley Mowat – Somewhere Off the Coast of Antarctica

Update from the Farley Mowat - Somewhere Off the Coast of Antarctica 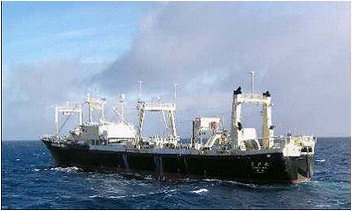 Whalers still scattered and fleeing, the Farley Mowat still pursuing, a dead whale is found, and the crew take a plunge with the penguins.

The crew of the Farley Mowat welcomed the New Year in with a truly unique style.

While the Farley Mowat's helicopter was away on a three-hour reconnaissance flight, the ship parked alongside a beautiful
iceberg. On small floes around the berg were numerous Adelie penguins. A large sperm whale swam nearby while a mother humpback and her calf circled the iceberg during the entire time.

Many of the crew earned their Penguin Swim Club status by diving into the zero degree Celsius water to swim with the penguins.

To qualify for the certificate, the swimmers must go in with a bathing suit only or nude, whichever they prefer. The only two nude swimmers were Geert Jan Vons from the Netherlands and Jon Batchelor from the United States.  The only female crewmember to take the plunge was young Emily Hunter from Canada, eh. The other certificates awarded were to Wessel Jacobsz of South Africa, Peter Heller, Lincoln Shaw, Casson Trenor, Jeff Watkins, Joel Capolongo, Dennis Marks, Jim Pacheco, Dan, and Chris Price of the United States, Darren Collis and Luke Westhead of Great Britain and Simeon Houtman of New Zealand.

When the helicopter returned from reconning the ice edge westward and northward, the Farley Mowat resumed her course westward.

The helicopter had spotted a dead young sperm whale floating on the surface at a distance of thirty-five miles. The Farley Mowat investigated the situation and found a sperm whale of approximately eight meters in length. There were no visible wounds and the body was attracting dozens of seabirds. Cause of death is unknown.

Dozens of fin whales were also spotted from the helicopter. A search of an area one hundred and fifty miles long and sixty miles wide failed to spot any whaling vessels. We will send the helicopter up again tomorrow to continue the search.

The Japanese factory ship and one harpoon vessel continues to flee westward at top speed and January 1st was another day that no whales were killed.

Pictured above: The spotters and harpooners of the Japanese killing fleet. Not pictured: the Kaiko Maru

Could the three harpooners be whaling? Not likely without the factory ship. The harpooners have no facilities to process the slain whales. Could the Kyo Maru, the spotting vessel be acting as a processing ship? There is a small possibility, but it is unlikely considering that the vessel does not have the deck space for cutting up a live whale.

Eight days since Christmas without a whale being killed, the fleet scattered and running aimlessly. Are they waiting for military assistance from Japan? Their objectives remain a mystery but everyday that whales are not killed costs them money and spares the lives of whales.

One report we received is that the Japanese whalers are afraid of being "attacked" by the Sea Shepherd crew. We hope they keep thinking that way.